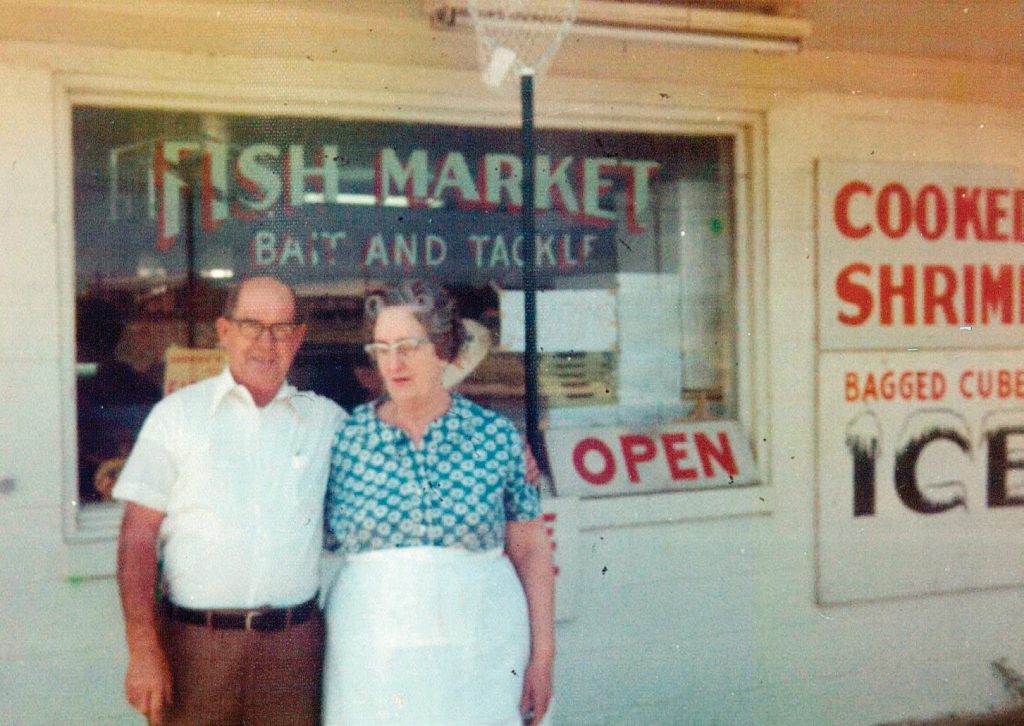 Luke Hines and his wife, Ruby, opened their seafood business in 1951 at the site of what is now the Poe’s Tavern parking lot on Old Causeway Drive. | Courtesy of the HInes Family

There was a time in the 1920s when a young boy could take a rowboat, go shrimping on Bradley Creek and not dare leave his net in the water for more than five minutes. If he did, he would find it so full of shrimp he would barely be able to haul it back in the boat.

The late Luke T. Hines, founder of Hines Seafood — a Wrightsville Beach fixture for nearly three decades — was that young boy back then. Hines’s son, L.T., says his father’s entrepreneurial spirit was evident from an early age. After making his daily catch, Luke would boil the shrimp in a family washpot behind the Hines’s home on Oleander Drive.

“Daddy would take the cooked shrimp, go to Wrightsville Beach and he would sell them in little bags for 10 cents a bag, three for a quarter, on the back of a mule,” L.T. says.

The story of Luke and the late Ruby Hines, and their children, L.T. and his late sister Melba Hines Neville, evokes a time of innocence and adventure in the rich history of Wrightsville Beach.

Living on a developing island kept life interesting for L.T. and Melba. When the Intracoastal Waterway was dredged, the mud and silt was dumped on the marshland behind their home, which means the “Sandman” would invade on summer nights.

“When we were kids, there was no air-conditioning, and they filled that dirt in there and it blew through the screens at night like talcum powder,” L.T. recalls. “You would wake up in the morning and literally have to wipe your eyes to get the sand out of them.”

Ever the entrepreneur, Luke Hines placed his first seafood market in the hands of his business partner in 1951 and hit the road with his family in tow, trying to get rich selling “waterless cookware,” a precursor to nonstick pots and pans.

After a tough year of traveling to Orlando, Ocala and New Orleans, the family returned to the area. Luke sold his share in the first market and opened Hines Seafood on Causeway Drive, near the old Middle of the Island restaurant and the current site of Poe’s Tavern.

The family’s return to the area began a glorious time in the lives of the Hines children. Luke gave L.T. his first boat at the tender age of 9, a time when the town was “a kid’s paradise.”

“Daddy gave me my first boat when I was 9 years old, and it was submerged more times than I care to remember,” L.T. says. “I would take the boat out and ride all day long and you would probably see 10 pleasure boats the whole day — that’s how dead it was. I knew everybody on the beach. I enjoyed visiting people that wanted to chat about boats and offer me a cold glass of water.”

The children spent their time playing in the foxholes near home, or in the cells of the old Wrightsville Beach jail on Waynick Boulevard, or shopping at Newell’s department store.

“Going over there was like going to heaven,” L.T. says of Newell’s at the corner of Causeway Drive and South Lumina Avenue.

As a teenager Melba enjoyed roller skating at Lumina Pavilion and going to the Crest Theatre to catch the latest Hollywood release, she told Wrightsville Beach Magazine in 2008. L.T. frequently drove his car without a license and would often drive out to the end of Johnnie Mercers Pier.

“You really had to entertain yourself back then,” L.T. says. “From September to just about June, Wrightsville Beach was dead. There was nothing going on. The number of year-round residents back then, you could count them on one hand.”

L.T. says the only water available at beach cottages was well water and, quite often, it was very brackish. So Luke made an arrangement with Charlie Fells, owner of Middle of the Island, to tap into Charlie’s well.

“My dad and Charlie were old card-playing buddies, fishing buddies. Charlie had to have a very deep well for the Middle of the Island because he needed it for water, for cooking and drinks. Daddy [talked] him into letting us use the water out of his deep well. Then Daddy and I dug a ditch from the fish market all the way to the commercial building and we put plastic pipe, rolled it out and that was the water pipe that was used for our water system. We’re probably suffering from some strange disease today [as a result],” L.T. says, laughing.

Luke Hines developed his business philosophy by trial and error. He expanded Hines Seafood to Carolina Beach and built a seafood business on Oleander Drive near the Independence Mall area, but the businesses did not fare as well as his Wrightsville Beach location.

L.T. says his father’s business philosophy was simple: “He told me, ‘Son, always decide to do one thing and do it well. Don’t try to get too big.’”

Kim Getz, Luke Hines’s granddaughter, says the story of how the Hineses came to own the property provides a glimpse into how land deals were based on a handshake and a person’s good word.

“He bought that, where the beer and wine shop and the former kayak business was,” Kim said in 2008. “He wanted that, and the man he was going to buy it from said he could have all three lots for $1,000. My granddaddy said, ‘Can you give me a year to pay it?’ and the man said, ‘Yes.’”

Luke built the family A-frame house on Seacrest Drive, where property was created from the dredging of the Intracoastal Waterway. The home has been passed down through the generations, and Kim lives there today.

Luke Hines’s way of doing business is a remnant of a different era, says L.T. “It was all done on a handshake. I think the lawyer, all he did was draw up the (sale) agreement.”

Until health inspectors required Luke Hines to prepare his seafood on-site, the Hines family cooked their shrimp the way they had for generations.

“They cooked the shrimp in that big ole washpot,” Melba said in 2008. “Family members would sit out there and peel those shrimp all day long, and drive them over to the fish market, and Daddy would sell them.”

Luke built an addition onto the back of his seafood market to accommodate a cooking facility that met modern health standards. But the introduction of deep-sea fish spelled the beginning of the end for Hines Seafood.

“The boats kept going further out toward the Gulf Stream and bringing big fish in there that we were not used to eating,” L.T. says. “Daddy’s fish market did not smell (and the deep-sea fish did). He spent a lot of money keeping it smelling nice.”

Melba said her father believed a seafood market should smell like the ocean. When customers kept requesting fish like king mackerel and red snapper, he finally obliged them.

“You couldn’t get Dad to put a king mackerel in that shop,” L.T. says. “Finally, people started asking for it, so one day we had a brand new shipment come in, and he said, ‘We’re going to steak that king mackerel up and sell it.’ We cut it up and it was an instant success.”

But it was a change that didn’t suit Luke Hines, so, in 1976, after offering to sell the business to his two children — alas, to no avail — Luke Hines sold Hines Seafood, ending a colorful chapter in the history of Wrightsville Beach.

She said her father had to fish to earn his keep as a child, but it became his greatest joy and the hallmark of one of the founding families of modern-day Wrightsville Beach.

This story has been re-edited and updated since first published in May 2008.

Clean the fish and remove the heads; leave the tails on. Cut gashes (two or three) across each side of the fish. Do not cut through the backbone. Add the oil to a large, well-seasoned, cast iron frying pan and heat for a few minutes. While the oil heats, salt and pepper both sides of the spots. Place the cracker meal in the bag. Put the fish in the bag, about two at a time, and shake the bag until the fish are coated. When the oil is good and hot (almost smoking), carefully slide the coated fish into the pan. Do not crowd the fish in the pan. Cook the fish until golden brown on the first side, then carefully turn the fish and brown the other side. Remove the fish from the pan and drain on paper towels or a brown grocery bag. Continue frying fish until all are cooked. Serve immediately.

Good accompaniments include fries and slaw, stewed potatoes with onions, big hominy, pork-n-beans, hush puppies or cornbread. And if you’re from the South, a steamy bowl of cream grits.