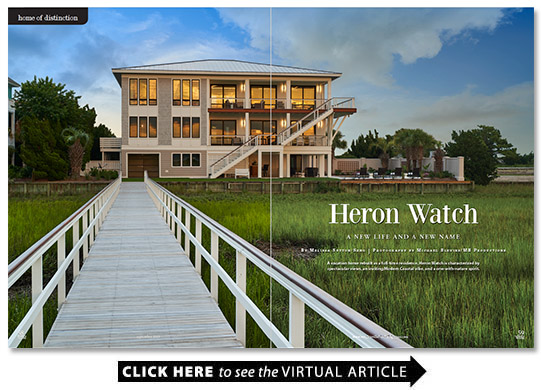 A New Life and a New Name

Robert and Lisa Beller bought their vacation home on Lumina Avenue in 2004 and have been spending summers at Wrightsville ever since. “We’d come down here literally as soon as school got out for the summer. We’d pick the kids up from school toss their backpacks in the car and head for the beach ” Lisa Beller recalls. “The kids grew up here.”

Last year the Bellers made the decision to undertake a dramatic renovation and move to Wrightsville Beach full time. “Well I decided about 15 years ago. It took Lisa a while to come around ” jokes Robert. “That’s probably true ” says Lisa. She had always loved the area for its natural beauty and the outdoor lifestyle their summer home provided but she’d been reluctant to move and start all over in a new town. However now that she’s a full-time resident she’s found the Wrightsville Beach community extremely friendly. “I feel loved and welcomed ” she says.

The Bellers’ home was a one-story with garage below. They’d used one of three garage bays as a rec area for the kids but hadn’t made many major changes to the traditional beach house. When they decided to renovate they worked with architect Michael Kersting to design a home that would be both beautiful and functional its clean lines and open feel a reflection of the family’s personality.

The design they landed on was a two-story modern home with a reverse floor plan with the main living areas on the top floor. It made perfect sense for a beach home with western-facing marsh views as sunsets from the top-floor living room and master bedroom are spectacular.

To accomplish the new design Bishop took off the roof of the house and tore everything down to the studs. They maintained the original footprint of the home only adding some additional support in the foundation. Some walls were moved to reconfigure rooms. There’s a coveted guest room with marsh view where the kitchen used to be.

Facing the street the double stairway to the first floor balcony was removed and the facade updated giving the house a modern but still beachy look. Kersting recommended gray shingles for the exterior complemented by white trim in clean lines for a contemporary interpretation that fits seamlessly into the neighborhood.

Behind the home a pier extends across the marsh to the gazebo which was lightly refinished to coordinate with the home’s new facade. A boat is docked at the pier ready for exploring. On the back of the home a set of steps dubbed “the stairway to heaven” grants access to each floor’s balconies.

From nearly every space one can appreciate the views. The cable railings on all the balconies are a nod toward the nautical. Where traditional wood railings tend to obstruct one’s view cable railings nearly disappear maximizing the view from within and making anyone inside the home feel that much closer to nature.

Kersting and his team created a new entryway on the ground level. Upon entering the house the first view is of the sideyard pool area visible through floor-to-ceiling windows across the entryway. A glass door opens to the loggia an open-air room that erases the boundary between indoor and outdoor living space. Furnished with plentiful seating and a custom-built bar by Kevin Gratwick of The Artisan Studio and equipped with a Sonos sound system the loggia is one of the homeowners favorite places to relax and entertain guests.

The doors throughout the home were custom made by Trustile. Horizontal panels and offset stiles (the vertical pieces) create a look that is unique and contemporary.

When choosing art for the home Smith and Gsell made sure to select art that draw the outside in. They thought of the outside as art and sought to accentuate and reflect the natural hues of the coast.

Inspiration came also from the homeowners themselves. During the course of the project the Bellers took a trip to India and Lisa happened to show Gsell and Smith some of the photos she’d taken while away. Recognizing that Lisa had an exceptional eye for photography the pair suggested using Lisa’s own photos as art throughout the home. They chose some favorites and the photos printed on metal sheets rather than canvas choosing the frameless look in keeping with the minimalist aesthetic.

On the top floor the kitchen dining and living areas flow seamlessly together under a single vaulted ceiling while still functioning well separately in their own zones. At the top of the stairs sits a blue console built by Lester Furniture Mfg. which crafted pieces of custom furniture throughout the home. Two small ottomans on casters nest beneath the console convenient seating for the built-in bar a few feet away. In the adjacent living area a blue accent wall matches the console and holds custom-built shelving by Intracoastal Iron & Metalwork. Blue Water Surfaces crafted a custom marble coffee table for the space and Lester created the sectional. In the top floor powder room the custom concrete countertop and sink by Blue Water Surfaces are all of one piece; the subtle wave shape hinting at the nearby ocean.

The Bellers and Kersting spent a great deal of time deciding on the kitchen design and cabinetry. Jeff Fuchs’ FFT Cabinetry did all the cabinetry and all the built ins throughout the house. In keeping with the clean and simple aesthetic Lisa wanted everything to have a space with nothing sitting out on counters. To answer that need a central pantry serves for all food storage; the refrigerator’s flush-mount panels are identical to the pantry door and other cabinets. White quartz countertops and white upper cabinets balance out the dark brown of the oak cabinetry. The oak floors in the kitchen and throughout the house received a lighter finish reflecting the appearance of beach sand.

Two tall windows on the southeast corner fill the breakfast nook with light and create a connection with the neighborhood giving one the chance to wave at cyclists on Lumina Avenue while enjoying morning coffee. The blue banquette and white swivel chairs on the breakfast nook were both custom built by Lester.

The rebuilt home includes two offices one for Robert on the first floor and Lisa’s on the top floor. His office boasts expansive views to the west a feature he says is both the best and worst thing about the room. “It’s hard to stay inside and work when there’s a boat right there waiting for you.” Robert’s office furniture is made up of updated pieces from their previous residence in Raleigh and custom furnishings designed specifically for the space. Lester reupholstered the ottoman and the desk was made by The Artisan Studio. Modern industrial shelves by Intracoastal Iron & Metalwork line the north wall.

Taking center stage on the first floor is the “Superbowl Room ” equipped with a large TV and sound system designed for serious game watching. Barn doors on one wall and a custom wood sliding door of rift-cut oak on another close the room off completely giving the sports fans in the family the freedom to cheer — or boo — as loudly as they like. Features like those prevent sound from intruding too much throughout the home while allowing it to feel open and spacious a consideration that was important to the homeowners.

There are four bedrooms on the first floor two for the Bellers’ children and two guest rooms. Each has its own bathroom and is distinctly decorated with a modern feel. Softer blues and whimsical touches characterize the daughter’s room while their son’s space is furnished with mid-century style natural wood pieces for a masculine feel. Two guest rooms on the opposite side of the home are both tranquil and beautiful though the west-facing room with marsh views is every guest’s first choice.

The master suite is elegant and simple directing one’s gaze through the floor-to-ceiling windows to the beauty outdoors. The aim throughout the home says Kersting was “dissolving the line between inside and outside.” A custom headboard by Lester and nightstands by Artisan Studio reflect the blues and whites of the sand and water.

As with any Wrightsville Beach home hurricane defense was an important factor in the construction. Heron Watch is an IBHS Gold Fortified home the highest rating given by the Institute for Business & Home Safety. At the top of the stairs between the ground floor and first floor is a door that can be pulled down creating an airtight seal. In the event of flooding the door keeps at bay any water that might encroach on the ground floor preventing it from inundating the upper levels of the home. The shape of the roof was designed with hurricanes in mind. Its low pitch is ideal for withstanding strong winds. The safety feature with perhaps the biggest coolness factor is the Kevlar screening on the balconies. Also serving as sunshades the screens are operated by remote control and can withstand hurricane-force winds.

Every member of the project team came away with something new in common: friendship. While I was interviewing Smith and Gsell Lisa Beller called just to say hello. During our tour of the home Kersting invited the Bellers to join him for dinner. Graham shared baby photos with the couple. They all speak glowingly of one another and of the home exuding the friendly community feeling that makes Wrightsville Beach the perfect spot for a modern coastal sanctuary.