The amazing scale of Tom Risser’s life and work 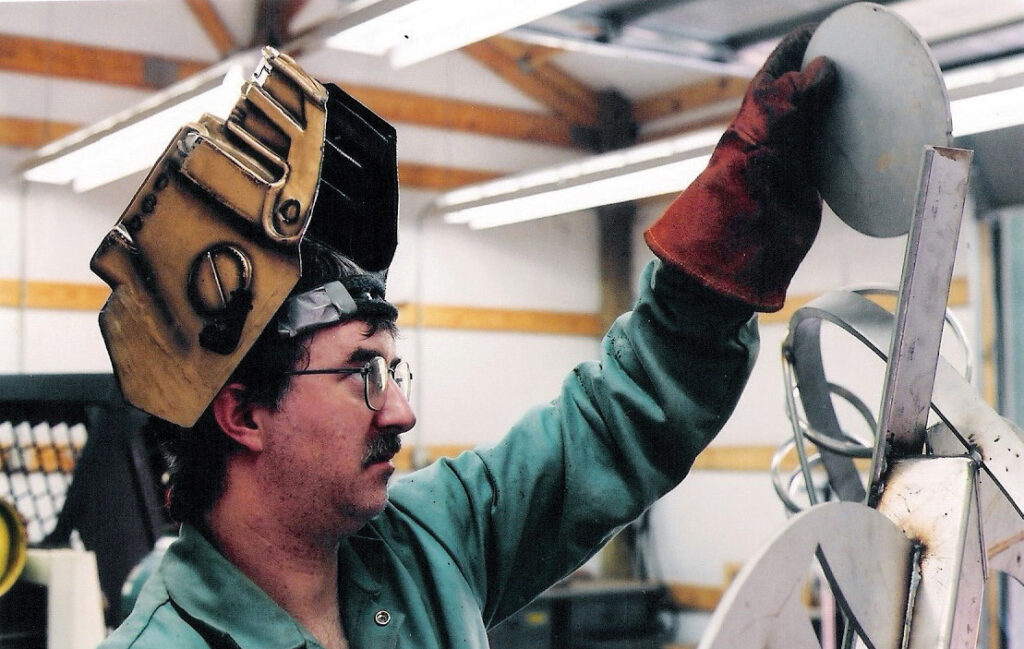 Tom Risser welds a sculpture in his studio circa 2006. Daisy Risser.

Presenting the life and work of Tom Risser with clarity and accuracy is an intimidating proposition. To put it simply, this sculpture artist/entrepreneur/engineer/skateboarder has a lot of irons in the fire and a seemingly endless supply of energy.

The idea that a work of art is a gift an artist bestows for the world to enjoy is on full display at Risser’s legacy project, Heartseed Gardens. Located on 80 acres near Liberty Hill, South Carolina, it features more than 75 of his sculptures, connected by miles of walking trails and set against a backdrop of pine trees and native forest.

The centerpiece of the property is a 13,000-square-foot concrete skate park designed and almost entirely hand built by Risser.

“We bought 80 acres in the middle of nowhere South Carolina to allow a creative space to expand, to provide a gift to the world, if you will,” Risser says. “I envisioned this as a sculpture park project that I could spend a few decades creating, and then sharing with the public.”

Most of his work is composed of welded metal, concrete and mortar, though Risser also enjoys taking photos, painting and working in graphic design. His art is informed and inspired by his career as a professional engineer designing packaging machines, background as a skateboarder, and experience as the owner of Charlotte-based U.S. Bottlers Machinery Company, a family owned and operated business that stretches back four generations.

“This was certainly inspired by the sculpture parks springing up around the country — especially impacted by my visit to Brookgreen Gardens,” Risser says. “In fact, my first figurative piece was named after that amazing place.”

Whereas the sculptures at Brookgreen Gardens portray human and animal forms in a realistic fashion, most of Risser’s work is more abstract. Some of his creations showcase his ability to achieve realism, some are more symbolic, some have a story to tell, and some are just organic forms that evolved from the materials and settings in which they were made.

“Metal is always my go-to for scale and power; a medium I explore without intimidation or boredom,” Risser says. “Here I can build small or mammoth, whimsical or intense, figurative or abstract. I can place a polished concrete sphere next to a life-size texting T-Rex and it feels fine.”

The work he is referencing is composed of a large number of metal pieces welded together. An approximately 6-and-a-half foot tall adolescent T-Rex is walking through the woods, face down in his phone. It is hard to imagine the piece striding through the more traditional Brookgreen Gardens, though it would be fun to see it there.

“This place is magical in some ways,” Risser says. “It allows the creativity to be unlimited by rules or critics — and lets me use everything from scrap metal left over at work to tires I find on the roadside.”

Conversely, some of the placements and themes evident in Risser’s art are clearly reminiscent of the sculptures at Brookgreen.

The approximately 12-foot-tall depiction of Mother Nature holding a lightning bolt is a great example. Set on a cleared hilltop, it is a singular piece of the landscape, commanding everything in sight.

“You don’t want to be here when a storm is approaching,” laughs Risser, referring to the fact that the sculpture comprises hundreds, or possibly even thousands, of tiny pieces of scrap metal welded together.

Even though he had been collecting scrap metal from his real job for a while, he was a late bloomer in the field of art exploration.

“I was focused on becoming an engineer in packaging machine design during the week and then building insane skateboard ramps on the weekend — until I found a plasma cutter and a welder appealing when I was around 34 years young,” he says.

After experimenting with scrap metal and welding it into some early pieces, Risser knew it was something he wanted to keep doing. Eventually, the five acres he shares with his wife, Daisy, in Waxhaw, North Carolina, started filling up with artwork.

“A few galleries tracked me down, and it turned into a hobby that was getting out of hand,” he says. “After dealing with multiple galleries, Daisy and I ended up opening our own gallery in town, just for fun. We experimented with that for a long time, until we gave it away to some folks who still operate it today.”

At first, the land that became Heartseed Gardens was so raw that it took Risser two years just to build a road, a gate and a workshop. It was 2012 before he built his first sculpture there, and by the time the skate park was done, he had cleared at least a hundred stumps, shoveled loads of dirt, and smoothed cement with a diamond grinder for weeks on end.

Risser had a vision to create a throwback, ’70s-style skateboard park that was completely unique, a sculpture in itself.

The intricate design of the skate park certainly begs the question of whether something like that could be considered a work of art. As Risser says, “It is a handmade sculpture of the largest scale.”

Risser’s sensibilities as an artist and designer of intricate packaging machines led him to abhor repeating designs. Realizing what he was looking for would be next to impossible in a public setting, he decided to build it himself.

“This is a frozen ocean storm, an obstacle course of crazy,” says Risser, who hauled in thousands of pounds of steel, shoveled dirt, welded many reels of wire, and hand rolled all the coping to attain his vision.

Maybe the workload was too much. Whatever the reason, he had a heart attack on the property in 2016 that required quintuple-bypass surgery.

Risser had complained to his doctors about heart issues for 12 years, but he passed every test and they could never find anything wrong. The doctors told him that skateboarding had saved his life, as he had created his own bypass (collaterals) around many of the blockages.

Since the heart attack, much of Risser’s work has featured hearts at the center or as a theme. It would seem like a no-brainer to think that the name of the gardens points to this, but it was named before that happened.

“It is the kind of place where we sow joy, so we named it Heartseed Gardens,” Risser says.

If his work looks familiar, it could be because two of his sculptures are located at Greenfield Grind Skate Park in Wilmington. Many of his heart-centered pieces are featured at major medical centers, and some of his earlier work can be found all over Greensboro. Risser is a graduate of Guilford College and a lot of people there appreciate his work.

With numerous, large-scale art installations mainly composed of stainless steel and concrete, it is easy to imagine that Heartseed Gardens and Whip Snake Park — named for the snakes that gave Risser fits when he was building the skate park — will stand the test of time. What will future generations think about this place? If some terrible, extinction-level event wiped most of us off the planet and some future species or group of aliens “discovered” Risser’s creations, what would they think?

It seems like a worthy idea to ponder while strolling through the 80-acre plot that Risser has shaped into a sculpture garden, or while making the four-hour drive back to Wilmington.

The fact that someone would work so hard to build a sculpture garden/skate park to leave behind for future generations without any expectation of profit may be another worthy idea to consider. “I want to share fun, over anything else,” Risser says.

Art sculpture gardens have been placing communities on the map across the nation, providing spaces for people to congregate, share ideas and get inspired. These places have been especially valuable since the start of the pandemic, and a variety of businesses have cropped up around them.

As Risser states when referring to Heartseed Gardens, “It is in the middle of nowhere, which is now somewhere.”

Risser recently just purchased 14 acres near West Jefferson on the New River in North Carolina’s High Country and is hoping to build huge sculptures all over the mountain. His many plans for the property include connecting with the art community and starting a studio in the coming months, but he doesn’t have anything concrete — yet.

Risser enjoys sharing his creations with the public, however, due to safety concerns, he asks that anyone interested in a tour contact him via social media before showing up.