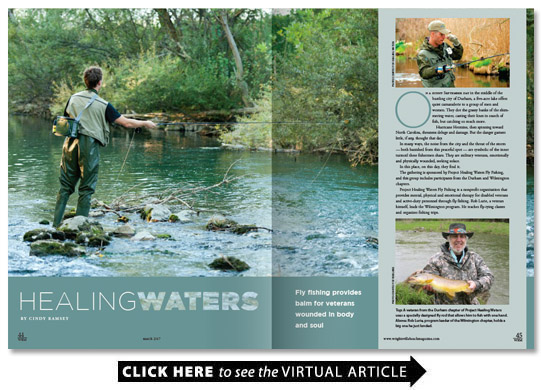 On a sunny September day in the middle of the bustling city of Durham a five-acre lake offers quiet camaraderie to a group of men and women. They dot the grassy banks of the shimmering water casting their lines in search of fish but catching so much more.

Hurricane Hermine then spinning toward North Carolina threatens deluge and damage. But the danger garners little if any thought that day.

In many ways the noise from the city and the threat of the storm — both banished from this peaceful spot — are symbolic of the inner turmoil these fishermen share. They are military veterans emotionally and physically wounded seeking solace.

In this place on this day they find it.

The gathering is sponsored by Project Healing Waters Fly Fishing and this group includes participants from the Durham and Wilmington chapters.

“For me helping a veteran to feel comfortable in our tying sessions to help them tie their first fly to catch that first fish on a fly they tied and see the excitement on their faces makes me feel I have done well ” he says.

Lurie and his wife Martha moved from their Massachusetts home to Wilmington in 2009. By that time he had been fly fishing for decades and had become a certified instructor through the International Federation of Fly Fishers. That certification put his name on an international website and his future on a collision course with Project Healing Waters.

“Six years ago I received a call from a guy in Montana who said a veteran in Wilmington who was a member of Project Healing Waters needed help with his fly casting ” Lurie explains.

The caller who was a certified instructor himself had searched the Internet for an instructor in the Wilmington area and found Lurie. After that call Lurie not only helped teach that veteran how to cast he also became a part of Wilmington’s Project Healing Waters program. When the leader moved away a couple of years later Lurie took over.

The group meets on Thursdays either to tie flies at the Wilmington DAV Chapter 11 building just off College Road or to go fishing for the day at lakes or ponds within driving distance.

They take two big fishing trips each year — Pennsylvania in the spring and to the streams of the Great Smoky Mountains National Park outside Cherokee North Carolina in the fall.

“When we fish the Cherokee property they provide licenses and passes and overstock the river for us ” Lurie says. “The Cherokee Reservation built a hardship access so veterans can roll their wheelchairs right down to the water.”

Project Healing Waters is open to veterans with any disability that is recognized by the VA. Some are more visible than others but the degree of disability is not a disqualifying factor. Neither is the program limited to veterans from a certain conflict or time period as some other programs are.

“Since my primary disability is a loss of hearing I wasn’t sure I qualified ” says Wes Cox who in 1962 began a career in the Air Force that lasted for more than 20 years. “After all there are many with what I perceived as more severe disabilities than mine.”

After learning that he did indeed qualify Cox joined the Wilmington program about a year and a half ago. He says he still considers himself a novice but enjoys learning and especially appreciates the camaraderie with fellow vets.

“We represent practically all branches of the military and enjoy sharing our experiences when we get together ” Cox says. “Since we are all broken veterans we share a brotherhood that most of our civilian counterparts don’t understand.”

Army veteran Joe Provens does understand. The experience is after all about a whole lot more than fishing.

“If I could sum it up ” Provens says “a lot of guys here will tell you that it’s easy to get withdrawn. Healing Waters helps bring you out of your shell.”

Provens a paratrooper who served stateside during Desert Shield and Desert Storm because of a fractured vertebra sustained in a jumping accident was introduced to fly fishing by his future son-in-law during a trip to Asheville North Carolina. Interested in everything fly fishing he was watching an episode of Fly Rod Chronicles on television when he saw a segment on Project Healing Waters and knew he wanted to get involved.

He joined the group in New Hanover County and after seeing the benefits of the program he helped start a chapter close to his home in Robeson County. But he still drives some 100 miles to the coast for the Thursday session because he really likes the guys in Wilmington and has developed a friendship with them.

That friendship is evident to anyone witnessing the easy banter among the members during a fly-tying session. It is also evident under the tent next to the lake where the veterans take a break from fishing to eat pizza and talk. They talk about the fish they caught and what rod fly or bait they used but they also talk about their service in the military.

Although their age range varies by decades the kinship of these veterans comes from a deeper understanding of each other. From veterans of World War II to Afghanistan and Iraq and every war in between they share an inner knowledge civilians often can’t discern.

Sitting on the banks of the GE Aviation Lake in Durham veteran Robert Ellis is joined by his nephew and also surrounded by fellow veterans — especially as he attempts to reel in a huge catfish.

Ellis who turned 90 years old November 4 lives in Durham and participates in the Triangle program of Project Healing Waters. He traveled all over the world as a member of the U.S. Air Force but talks about his memories of fishing at Ocean Isle. Now blind he can still fish and his fellow veterans surround him with obvious admiration and dedication to help.

Project Healing Waters was founded by career Navy veteran Ed Nicholson after a stay at Walter Reed Army Medical Center for cancer treatment in 2005. The stay put him face-to-face with wounded warriors returning from Iraq and Afghanistan. He wanted to do something to help. He knew that the serenity fishing offered him could be a healing experience for others as well.

The program that Nicholson founded for wounded warriors at Walter Reed first expanded to other military and veteran hospitals nationwide and kept growing. Project Healing Waters is now an international organization with more than 200 programs in communities across the United States as well as in Germany Canada and Australia.

Participation requires no membership dues and everything the veteran needs to learn to tie flies build rods and fish is provided free of charge from donations from businesses and individuals.

Project Healing Waters includes an annual rod-building contest with fishing trips as prizes. Each participant receives a fly rod kit. They take classes to learn the rod-building process but must do all the work themselves. The completed rods are judged nationally with first- second- and third-place winners in each of three categories.

“The veterans get to keep the rod they built ” Lurie says. “Now we can add catching a fish on a fly they tied and a rod they built. How much better can it be?”

With more than 600 rods built and submitted nationally in 2016 alone the competition is stiff. Still two veterans in the Wilmington area have won trips so far.

Provens was one of those winners earning first place with his very first entry. He won a fishing trip to Montana.

“This program is why I got to go ” Provens says.

Volunteers are a big part of the program teaching the skills and providing any physical support veterans may need — from pushing a wheelchair to baiting a hook. Adaptive equipment has been created often designed by veterans to help overcome disabilities that might prevent someone from fishing.

“We find ways to turn their disabilities into abilities ” Lurie says. “Helping them helps me with my disabilities too.”

“We get into it for a lot more than the fish ” Lurie says. “There is a calmness and camaraderie.”

Anyone who lives in hurricane country understands the calm before the storm just like that sunny September day at the lake. But the calm these veterans seek is different. They are fishing for an internal calm after the storm of war and many find it in healing waters.