Harriss Northrop and the Northrop Cottage 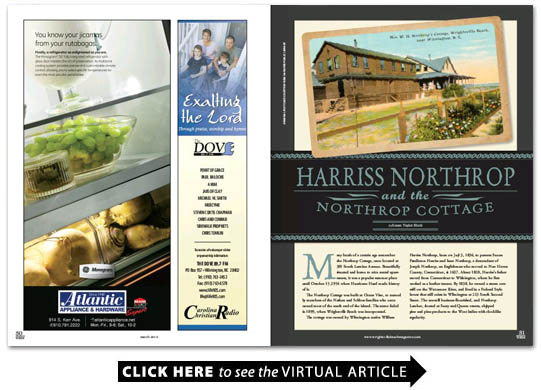 Many locals of a certain age remember the Northrop Cottage once located at 305 South Lumina Avenue. Beautifully situated and home to nice rental apartments it was a popular summer place until October 15 1954 when Hurricane Hazel made history of it.

The Northrop Cottage was built at Ocean View so named by members of the Nathan and Schloss families who once owned most of the south end of the island. The name faded in 1899 when Wrightsville Beach was incorporated.

The cottage was owned by Wilmington native William Harriss Northrop born on July 3 1836 to parents Susan Pendleton Harriss and Isaac Northrop a descendant of Joseph Northrop an Englishman who moved to New Haven County Connecticut in 1637. About 1820 Harrisss father moved from Connecticut to Wilmington where he first worked as a leather tanner. By 1838 he owned a steam sawmill on the Waccamaw River and lived in a Federal Style house that still exists in Wilmington at 213 South Second Street. The sawmill business flourished and Northrop Lumber located at Surry and Queen streets shipped pine and pine products to the West Indies with clocklike regularity.

Harriss with his brother Samuel managed the business until the Civil War began. Harriss served with the Wilmington Light Infantry at Fort Caswell and Fort Fisher where he helped engineer construction. As a lieutenant in the Third North Carolina Regiment he commanded his company during the Seven Days Battles around Richmond in 1862. Then he fought in the Battle of Sharpsburg where he was commissioned captain before returning to Fort Fisher. Harriss was on duty near Richmond when the war ended. Dressed in pitiful looking pants he spent the only money he had a quarter to buy enough cloth to fashion himself a shirt. He then walked back to Brunswick County where he boarded the ferry to return to Wilmingtons Market Street dock and a changed world.

After the war the lumber business was kind to Harriss Northrop and as the sap rose so did Harrisss real estate portfolio. At one time he owned houses at 15 South Fifth 806 Orange and 517 Dock streets and also a waterfront Wrightsville Sound retreat at Bradley Creek. Harriss forever known to many after the war as Capt. Northrop entertained hosts of friends and relatives on the sound during mosquito season. He was famous for his cheerful hospitality and the Northrops breezy oak-laden sound property made a perfect backdrop for eating clinking glasses and reliving Civil War battles. At one reunion of the famous Third North Carolina Regiment their Rebel Yell was said to have literally shaken the rafters of the house.

The Northrops added oceanfront land to their property list when the Nathan and Schloss families developed Ocean View which covered most of the south end of todays Wrightsville Beach. The Ocean View Railroad began operation in 1889 making it easier to live at the beach and more accessible for property buyers. The Northrops bought two cottages. Ten years later there were more than 60 dwellings on Ocean View and the Town of Wrightsville Beach was incorporated. Harrisss brother Samuel served as the municipalitys first mayor.

That year also brought a frightful tragedy to the Northrop family. The mother-in-law of his beloved nephew and namesake W. H. Northrop II was run over by the Seacoast Railroads engine near the Seashore Hotel. Susan McPherson had just left the Northrop Cottage and walked two hundred yards north to the stop on August 25 1899 when she “in some unaccountable way ” reported the Wilmington Messenger on August 26 1899 stepped right onto the track just five feet in front of the cow-catcher. The ocean side wheels cut her body in two on impact an unspeakable horror viewed by her son-in-law two young grandchildren and several other witnesses.

Mrs. McPhersons remains were returned to the Northrop Cottage where many neighbors gathered to comfort the family. Her brother Wilmington pharmacist J. H. Hardin accompanied the body to Wilmington on a special train run about three hours after the accident. The funeral service was held the next day at St. James Episcopal Church and Mrs. McPherson was laid to rest at Oakdale Cemetery on August 26 1899.

Eventually Harriss who was staying in another beach house bought Samuels larger cottage. An expansion created a 20-bedroom house the Northrop Guest Cottage run by Harrisss wife Alice Middleton Fillyaw Northrop. Capt. and Mrs. Northrop established the hospitable and jovial nature of the place described by the Star as “a select home for many people all over this and other states during the summer season.” Sadly Alice died at age 55 in 1912.

The following year the two Northrop brothers sold their lumber business to the Wilmington Terminal Company for what in those days was the whopping sum of $60 000. Partnership in several other businesses added to Harrisss ease of life. So did a very unconventional choice to make Wrightsville Beach his year-round residence.

Selling the house in 1919 to his nephews widow Sarah McPherson Northrop Harriss continued to live at the Northrop Cottage. During summers Miss Sarah was the lady of the house aided by the services of Josephine “Mammy” Nixon an African American who probably did most of the cooking and cleaning. Like Harriss Northrop Josephine lived at the cottage all four seasons of the year during that era.

Albert Hurst another African American a commanding figure pictured with Harriss Northrop ran the place. With a gift for organization and a somewhat imperial manner Albert kept things at the guest cottage going smoothly and was a good companion to the aging Harriss Northrop. Albert found time to harvest oysters for the cottage and other markets. He also ran a rustic water-taxi for other African Americans who worked at Wrightsville Beach or wanted to visit Shell Island at the north end during its short duration as an African American resort.

On July 3 1923 the newspaper reported that Capt. Northrop turned 87: “For the past many years ” reported the Star “Captain William Harriss Northrop has resided summer and winter at his cottage at Wrightsville Beach.” Beach life seemed to serve him well though for the octogenarian was known for his youthful energy and for being “unusually active for a man of his years.”

Maybe beach strolling kept him going. It was about 1923 when Harriss posed with his shell collection for a remarkable photograph. The image is rare for several reasons. Wrightsville Beach interior shots from the early 1920s are quite scarce. The shell and dried star fish designs with which he has surrounded himself are amazing and quirky.

Perhaps Albert Hurst helped gather the shells and produce the artistic presentations. Whites and Blacks posing together for photographs was still unusual in those days and may indicate the esteem with which they held one another. Ironically a Confederate flag hangs on the wall beside them.

The Northrop Cottage remained a guest house in the care of Harrisss brothers widow Sarah Northrop and descendants. Mr. and Mrs. Louis Woodbury parents of the late Louis Jr. Gene Tom and Richard were frequent guests.

After Hurricane Hazel the Woodburys rented a log cabin on the beach and then purchased the empty lot where the Northrop cottage had stood. They built a house there that still stands just south of the Blockade Runner Beach Resort. Today Gene Woodbury and his wife Tee own the house. It is a sentimental place for them loaded with family memories including some from the couples wedding rehearsal dinner held there in 1958.