She was sitting on 55-gallon barrels with a tree growing through her middle when he first saw her in a friends backyard. But for Wrightsville Beach waterman John Riggs there was no mistaking the clean crisp design or the rich juniper and oak paneling: She was a Harkers Island fishing boat a 1960s heirloom.

Harkers Island boats were first built by 17th century commercial fishermen living on Harkers Island (population 2 000) who traditionally traded blueprints and measuring tools for learned expertise. They are built today by descendants of those fishermen using that same old-world vision and style.

Off the North Carolina coast just east of Beaufort and north of Shackleford Island Harkers Island quickly became a mecca for boat building after its first shipyard was established as early as 1752 by the islands namesake Ebenezer Harker. Though part of Carteret County Harkers Island was once an isolated community of fishermen and builders before the invention of electricity and the building of a bridge to the mainland in the early 20th century.

Now the boats made by the careful eye-estimation and primitive tools of master native craftsmen like Julian Guthrie James Allen Rose and their ancestors are considered top-shelf by boaters from Maine to Florida in terms of quality and essence. The boats appeal broken down for landlubbers is analogous to the sleek timelessness of a 1959 customized Corvette. 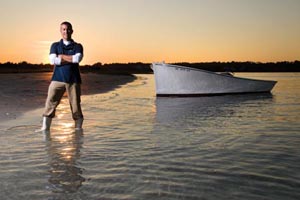 Riggs immediately recognized the opportunity to restore his found beauty to her once-striking state. With his friends wish-you-wells he brought her home to dry out for four months. Then began the back-breaking work: using a long board to grind years of paint off her peeling hull and then flipping her over to grind her insides. Riggs registers a blank look when recalling how many times he hand-sanded her old weak body.

“Too many to count ” he says. Next he soaked her with epoxy a resin that helps fiberglass adhere. Choosing whether to fiberglass an old wooden boat is one of the biggest decisions a restorer makes. Riggs reasoning was practical fiberglass is less likely to rot. With her new body intact Riggs electrically wired her and rebuilt the steering column. He decided to keep her trademark fall post a wooden post on the bow installed by the Harkers fishermen to hold net lines. After countless after-work rebuilding hours in his garage (sometimes accompanied by a few good-natured friends) she was ready to slide back in the water a year later in 1999.

Today the Bar Finder serves as Riggs primary boat for business and pleasure. He takes her out for sport fishing and enters her in the Wrightsville Beach Holiday Flotilla; one of her latest appearances was with a make-shift ferris wheel on her deck. Gliding across the open sea or skimming a sand bar near Masons Inlet shes caught many a boat enthusiasts eye.

“Older boats are just cooler you can put your own twist on them ” Riggs says adding “I know that no one else has a boat like me.”

“Im more of an up-to-date Carolina-boat kind of guy but I liked this boat. I liked the look of it ” Plott says of the 26-foot-long 9-foot-wide cruiser that he found (he laughingly admits) on Craigslist. 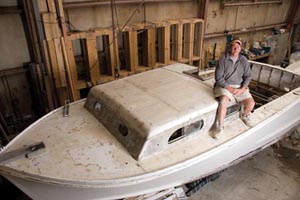 Plotts Harkers Island-style boat is a 1960s model that a previous owner handed over sheepishly with an original nonworking motor. But in his Ogden shop Sweet Tater Boats Plott restored the old motor to a healthy hum and rebuilt the deck working quickly over a month and a half to get it structurally ready for the Wrightsville Beach Holiday Flotilla this past November. During the winter hell restore the hull and give it a new paint job. Though he works on both new and old Plott expects a resurgence of boat restoration interest from his shop clientele.

“Weve done new construction but now weve gotten into a lot of the modern restoration ” he says. “With the economy people are keeping or buying older boats and fixing them up.”

Riggs also conscious of the new trend warns against assuming that boat restoration is cheaper: it can be but isnt always. Depending on the condition of the boat man-hours can really add up; whether its a do-it-yourself project taking a boatbuilder away from other ventures or an expensive contracted project. The expense isnt “so much the materials as the time sanding and glassing ” Riggs says. “Its cheaper to buy a new boat.” 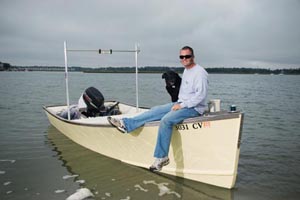 Karl Allen another local boat enthusiast avoided choosing between old and new designs: he elected both. While a student in the boatbuilding program at Cape Fear Community College he acquired a blueprint for an old Harkers Island wooden boat through research at the North Carolina Maritime musuem in Beaufort and built it from scratch himself.

Given the unspoken expertise of the trade on the island the plans were extremely hard to come by.

“I couldnt find anybody who had any plans or any measurements or anything ” Allen says. “They just build them by how they look how they feel. It was hard for me to grasp since this was my first boat that I built.”

Consequently Allen had to go with plans he found for a 21-foot boat that he adapted to a smaller style. Completed in 1998 the boat is an 18-foot-long and 8-foot-wide fiberglass blend of old-school lines and modern-day building techniques.

“Really I wanted to test myself to test what I had learned ” Allen says of his decision to build the old-time boat which he finished under an old oak tree on South Harbor Island. In accordance with tradition he installed a Sampson tie-in post that runs through the bottom of the boat rather than the more modern cleats or handle-looking bars on the inside of a boat.

Contrary to original design however Allen customized her interior with the more-modern non-rotting teak wood used in his boatbuilding classes and installed a smaller motor for fuel efficiency.

Gleaming in her “Fighting Lady Yellow” paint hue Allen uses his boat for trips to Masonboro Island with friends fishing and even duck hunting. A Wrightsville Beach native and owner of the local Riptide Boat Works boatbuilding company Allen knows the lay of the land and easily guides her through Wrightsvilles in-shore sandbars and inlets with a transom or large steering stick attached to the motor. These sticks are ideal for fishermen because theyre at the back of the boat and easier to manage than a steering wheel when pulling nets.

At the same time Allen is not afraid to take the old-time boat out into the open ocean where her proud bow deflects ocean waves with ease. “She hasnt capsized yet ” Allen says knocking on her wooden bow.

“Youve just got to trust what youre doing ” he says in the spirit of a true Harkers Island boat crafter. “Just like you trust that your car is going to crank in the morning.”