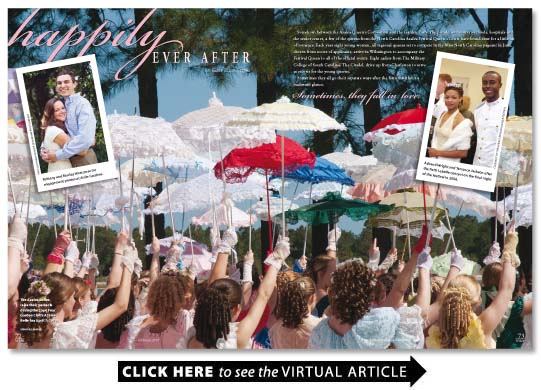 Somehow between the Azalea Queen s Coronation and the Garden Party the parade and visits to schools hospitals and the senior center a few of the queens from the North Carolina Azalea Festival Queen s Court have found time for a little bit of romance. Each year eight young women all regional queens set to compete in the Miss North Carolina pageant in June chosen from scores of applicants arrive in Wilmington to accompany the Festival Queen to all of the official events. Eight cadets from The Military College of South Carolina The Citadel drive up from Charleston to serve as escorts for the young queens.

Sometimes they all go their separate ways after the festival without a backward glance.

Sometimes they fall in love.

Beth Bell who organizes the queens confirms Romances do develop. They are neither encouraged nor denied but it s a wonderful environment to get to know someone free of the responsibilities of everyday life. Not to mention hair and makeup professionals to keep everyone looking their best throughout the week.

Brittany West who was crowned Miss Wilmington in 2008 and served as part of the Azalea Queen s Court the same year tells people how she met her husband Barclay.

Everyone says that it is the perfect fairytale situation. Some people don t believe us.  I don t even believe it myself sometimes she says.

Barclay was not assigned as Brittany s cadet during the week but she still caught his eye.

He says We arrived and met all of the ladies but were soon rushed off to go to the first event. The girls weren t allowed to go out period. They were locked down tight!

Instead there was a pizza party and everyone was sitting around in this hotel room looking around awkwardly. Brittany and I started comparing bad pick-up lines.

Brittany continues He asked me   How much does a polar bear weigh?   How much?   Enough to break the ice.

She laughed so I knew something was there Barclay says. She was the clear winner of the group in terms of personality he adds.

I ll admit that I found him very attractive when I first saw him Brittany says laughing.

Barclay originally from Texas was graduating from The Citadel that May.

At our wedding rehearsal dinner [in July 2013] my mom said   We almost got him back. One month. And then he met Brittany!  he says.

Barclay moved back to Texas after graduating but only made it until October when he returned to the east moving to North Carolina. He proposed at Airlie Gardens October 6 2012.

There was a wedding in the Pergola Garden. I had to stall until they left. I wanted to ask her to marry me right in front of the fountain there Barclay says.

We go back to the Azalea Festival every year Brittany says. We celebrate it almost more than our wedding anniversary.

The two welcomed a baby girl Margaret in September 2014.

Brittany continues When I was going through college thinking about the person I was going to marry I wanted a story I would be happy to tell my grandkids someday. And I feel like we have that.

The Azalea Festival is an intense five days so the queens and cadets have a chance to get to know each other well. Falling in love among the flowers means lengthy conversations instead of abbreviated texts and chaperoned civilized evenings with a group instead of rowdy nights at a bar.

Beth Bell says sometimes you can see a match happening right before your eyes.

It s fun to watch that develop Bell says. There have been several engagements. Many of the queens and cadets stay in touch after the event and often the cadets go to the Miss North Carolina pageant to support the queens. One year one of the Queen s Court members became Miss North Carolina. She fell in love with her cadet and he proposed to her the following year at the Patrons  Party.

There are at least eight couples that have made it all the way to the altar Bell says.

Ashanti Jackson a member of the Queen s Court in 2006 married her cadet Terrance Jackson in 2009. Nobody was more surprised at that turn of events than she was. Or maybe her mother.

I m one of those people who says   I ll never get married. Nope not me   Ashanti says. She talked to her mother after the festival.

Mom you know Terrance is someone I could see myself married to Ashanti says she told her mother.

Mom says I never thought that would happen.

It almost didn t. Terrance recounted the haphazard and random way he ended up at the festival.

I was sitting outside one day maybe a week before the festival and my company commander approached me and asked if I was interested in going up to Wilmington Terrance says. We would get emails about things like that all of the time and we would mostly just blow them off. Little did I know that it would end up being one of the most amazing times of my life.

Ashanti is a full-time writer working on her fifth degree a PhD in transformative studies. Her platform while serving as Miss Johnston County was advocacy for sexual assault victims and she has served as a Guardian Ad Litem.

Ashanti says Walking around with Terrance being at the garden party talking to so many different people together I got to see how supportive he was with my platform and he would talk about his future goal of being a US Army Special Forces Officer.

She says she was more outgoing but he would stand with her listening and supporting throughout the whole weekend.

It was that junction in life where you re a senior in college and about to make a transition from being a student and being under the wing of your family to being out on your own finding someone to share your life with he says. We talked about our perspectives on different things and we were similar in a lot of ways.

We talked constantly Ashanti says. Every time we were driving to an event waiting to walk in we were always talking.

She had a boyfriend at the time so she and Terrance kept their relationship on the friendship level. They lost touch but eventually reconnected still as friends. He moved to Alaska as part of his military service and Ashanti went to visit him. Friendship grew into something more and they got engaged before he deployed to Iraq in 2008.

Today Terrance is a Company Commander in the Special Forces and they reside in Yelm Washington (near Seattle) with their four-year-old daughter Kupuno Peru who has some inkling of how her parents met.

She sees pictures and says   Mommy is a princess   Ashanti says.

A Johnston County queen actually who got her fairytale ending during the North Carolina Azalea festival. Or should we say her beginning?