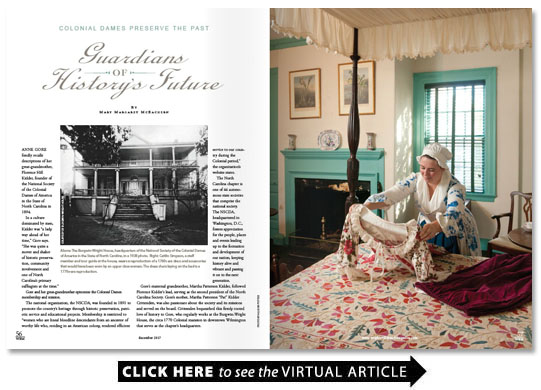 Anne Gore fondly recalls descriptions of her great-grandmother Florence Hill Kidder founder of the National Society of the Colonial Dames of America in the State of North Carolina in 1894.

In a culture dominated by men Kidder was “a lady way ahead of her time ” Gore says. “She was quite a mover and shaker of historic preservation community involvement and one of North Carolina’s primary suffragists at the time.”

Gore and her great-grandmother epitomize the Colonial Dames membership and mission.

The national organization the NSCDA was founded in 1891 to promote the country’s heritage through historic preservation patriotic service and educational projects. Membership is restricted to “women who are lineal bloodline descendantsfrom anancestor of worthy life who residing in an American colony rendered efficient service to ourcountry during the Colonial period ” the organization’s website states.

The North Carolina chapter is one of 44 autonomous state societies that comprise the national society. The NSCDA headquartered in Washington D.C. fosters appreciation for the people places and events leading up to the formation and development of our nation keeping history alive and vibrant and passing it on to the next generation.

Gore’s maternal grandmother Martha Patterson Kidder followed Florence Kidder’s lead serving as the second president of the North Carolina Society. Gore’s mother Martha Patterson “Pat” Kidder Crittenden was also passionate about the society and its missions and served on the board. Crittenden bequeathed this firmly rooted love of history to Gore who regularly works at the Burgwin-Wright House the circa 1770 Colonial mansion in downtown Wilmington that serves as the chapter’s headquarters.

Gore whose initial motivation to join the Colonial Dames was rooted in her long heritage of family involvement does her part to preserve history by working in the Colonial-style grounds of the house.

“My passion is gardening ” she says. “I really enjoy playing in the gardens at the Burgwin-Wright House.”

Colonial Dames membership runs in Wilmington native Jocelyn Lynch’s family too. Lynch joined the organization when she was 25. Now almost 70 she has enjoyed more than four decades of membership.

“I joined the Colonial Dames to follow in the footsteps of my mother and grandmother and especially since my sweet daddy said I should ” she says.

Gore and Lynch are continuing the legacy of other members who left a lasting impression on the organization. Margaret Hill Jewett McEachern retired as executive secretary of the North Carolina Society in 1994 one month before turning 91. She was described as a “Colonial Dame Extraordinaire” in an article by past president Lillian Bellamy Boney in the society’s newsletter The Pine Cone.

“No hurricane snow or rain ever deterred her from being on the job Monday through Friday even though it meant a 10-mile drive from the family compound on Greenville Sound ” Boney wrote.

Margaret’s memories of her 36-year career with the society “range from the sublime to the ridiculous ” the article continues. “[There was] the grateful man who kissed her after a tour of the Burgwin-Wright House the large rat she found swimming in the bathroom the night a photographer husband of a Dame tripped the alarm and had to explain before police took a shot at him and the Dame who fell into Joel Lane’s grave when his remains were reinterred.”

Christine Lamberton museum director for the Burgwin-Wright House says the NSCDA’s mission can be summed up in three words: “Preservation. Patriotism. Education.”

That includes saving restoring and interpreting Colonial-era sites like the Burgwin-Wright House.

English-born planter and merchant John Burgwin built the house in 1770 in the Georgian architecture style of the day. It became known as the Cornwallis House when British general Lord Charles Cornwallis used it as his headquarters while he and his troops occupied Wilmington in 1781. Thomas Grainger Wright purchased the house in 1799 and it remained in the Wright family for 90 years.

The North Carolina Colonial Dames purchased the historically important property in 1937 after “an eight-year campaign to save it” from demolition Lamberton says and began to restore the mansion to its original glory. It opened as a public museum in 1951 becoming a central component of the Colonial Dames’ educational mission.

Ambling through the preserved site one can be so captivated by its beauty that it’s easy to forget its historical significance to the city state and nation. That extends to the gardens lovingly kept by Lynch with the help of volunteers like Gore.

“I finally found my niche in the organization nine years ago in the garden and have been forming and shaping it ever since ” Lynch says. “It has been a learning experience an outlet for creativity and a place of peace and tranquility but above all I love it!”

Lynch recently received Preservation North Carolina’s prestigious Gertrude S. Carraway Award of Merit for her efforts at revitalizing the gardens and restoring them to their Colonial roots.

“I was so proud to be one of the 12 winners ” Lynch says. “It was wonderful to be in the company of fellow North Carolinians who are doing such good work all over the state in the areas of restoration and preservation.”

The North Carolina Dames own and maintain three other historically significant Colonial properties including the home of Joel Lane (the “Founder of Raleigh”) and Haywood Hall in Raleigh and Fourth House in Winston-Salem. Members donate and volunteer time toward preserving and maintaining these properties and other important historic sites.

Colonial Dames are passionate about their society its mission and how they can further that mission and they do not join or consider their membership and volunteer obligations lightly.

That includes Joy Allen the executive director of the North Carolina Society.

“Since I was a little girl I have loved old houses ” Allen says. “The adult ‘me’ is passionate about historic preservation so this job gives me the opportunity to make a difference in an arena I care about.”

Because of the ancestral requirement Allen isn’t an official member of the Colonial Dames. But she has enjoyed her position in the organization for the past five years just the same.

“I love my job for a few different reasons ” she says. “I enjoy working with the members so much I often have said that I am the president of their fan club.”

In fulfilling its educational mission the North Carolina Society maintains state archives containing information on its properties how it became involved with specific sites and genealogical information to assist members. The Burgwin-Wright House maintains local archives containing books and documents membership seals and family records donated by members. The archives are “open to academic research to universities other museums and other historical societies ” Lamberton says.

In 1952 the North Carolina Society instigated its Fourth Grade Program at the Burgwin-Wright House in which fourth-grade students in New Hanover County Public Schools can tour the house for free six weeks out of the year.

The Colonial Dames provide numerous educational opportunities including the Mary Bason Broadfoot Summer Internship which provides hands-on training at the Burgwin-Wright House for museum studies and library science students at the University of North Carolina Wilmington.

The Colonial Dames also assist active members of the military and their families by offering complimentary entry into the Burgwin-Wright House and Gardens. The organization supports immigrants striving to become citizens through education naturalization ceremonies and gifts. It also provides educational materials relating to flag etiquette.

While steeped in the very history that gave birth to our nation the NSCDA remains a dynamic organization whose members and employees verify facts dispel myths and foster genuine appreciation for our Colonial roots.

“There is so much more going on in the NSCDA since I became a member 50 years ago ” Lynch says. “The information now is historically accurate the organization as a whole is a leader in the areas of preservation restoration and documentation and is striding into the future with excellent leadership.”