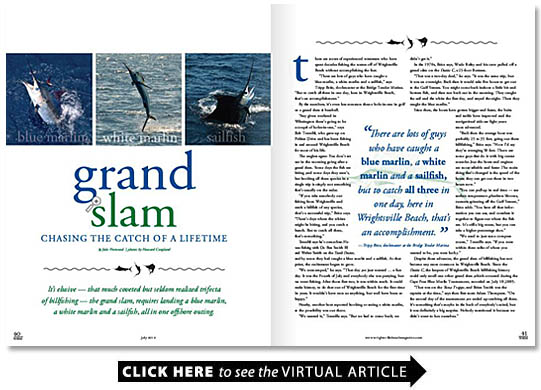 There are scores of experienced watermen who have spent decades fishing the waters off of without accomplishing the feat.

“There are lots of guys who have caught a blue marlin a white marlin and a sailfish ” says Tripp Brice dockmaster at the Bridge Tender Marina. “But to catch all three in one day here in Wrightsville Beach that’s an accomplishment.”
By the numbers it’s even less common than a hole-in-one in golf or a grand slam in baseball.

“Any given weekend in Wilmington there’s going to be a couple of holes-in-one ” says Rob Tennille who grew up on Pelican Drive and has been fishing in and around Wrightsville Beach for most of his life but a grand slam only been seen a couple of times in Tenille’s lifetime.

The anglers agree: You don’t set out in the morning going after a grand slam. Some days the fish are biting and some days they aren’t but hooking all three species in a single trip is simply not something that’s usually on the radar.

“If you take somebody out fishing from Wrightsville and catch a billfish of any species that’s a successful trip ” Brice says. “There’s days where the whites might be biting and you catch a bunch. But to catch all three that’s something.”

Tennille says he’s come close. He was fishing with Ben and Walter Smith on the Tooth Doctor and by noon they had caught a blue marlin and a sailfish. At that point the excitement began to grow.

“We were amped ” he says. “That day we just wanted … a fun day. It was the Fourth of July and everybody else was partying but we went fishing. After those first two it was within reach. It could make history to do that out of Wrightsville Beach for the first time in years. It wouldn’t have won us anything but we’d have been so happy.”

Nearby another boat reported hooking or seeing a white marlin so the possibility was there.

“We wanted it ” Tennille says. “But we had to come back; we didn’t get it.”
In the 1970s Brice says Wade Bailey and his crew pulled off a grand slam on the Dottie C a 25-foot Bertram.

“That was a two-day deal ” he says. “It was the same trip but it was an overnight. Back then it would take five hours to get out to the Gulf Stream. You might come back inshore a little bit and bottom fish and then run back out in the morning. They caught the sail and the white the first day and stayed the night. Then they caught the blue marlin.”
Since then the boats have gotten bigger and faster the baits and tackle have gotten better and the navigational aids are light years more advanced.

“Back then the average boat was probably 25 to 35 feet going out there billfishing ” Brice says. “Now I’d say they’re averaging 50 feet. There are some guys that do it with big center consoles but the boats and engines are more reliable and faster. The main thing that’s changed is the speed of the boats; they can get out there in two hours now.
“You can pull up in real time — sea surface temperature plankton blooms currents spinning off the Gulf Stream. You have all that information you can use and correlate it together to figure out where the fish are. It’s still a big ocean but you can take a higher percentage shot.”

“We used to just run a compass course ” Tennille says. “If you were within three miles of where you wanted to be you were lucky.”

Despite those advances the grand slam of billfishing has not become any more common in . Since the Dottie C the keepers of billfishing history could only recall one other grand slam which occurred during the Cape Fear Blue Marlin Tournament on July 10 2005.

“That was on the Tuna Trappe and Brian Smith was the captain at the time ” says then first mate Adam Thompson. “On the second day of the tournament we ended up catching all three. It’s something that’s maybe in the back of everybody’s mind but it was definitely a big surprise. Nobody mentioned it because we didn’t want to hex ourselves.”
Thompson says the reality didn’t set in until the boat got back to the dock.

“It didn’t really hit me until then. My buddies were there at the dock and they threw us in the water and we all celebrated ” he says.

Amazingly the catch wasn’t enough to claim the top prize in the tournament.

“We actually missed one more sailfish that day and another billfish I didn’t get my eyes on ” Brian Smith adds. “If we had caught one of those other fish we’d have won the tournament. The other boat had caught five white marlins and they beat us by 50 points. One more fish would have done it.”

In addition to good fortune a grand slam involves some strategy. Dr. Ben Smith grew up fishing with his father who is credited with introducing billfishing to a new generation of young men aboard the Tooth Doctor.

“I’ve come close a couple of times but I’ve never done it ” he says. “As far as strategy … usually you’re going to be in deeper water to catch a blue or a white so if you did that you’d head to the shallow water to try for a sailfish. Or if you had the white and the sail you’d head deeper for the blue. You’d switch up your tackle a little bit as well.”

It’s a passion that gets passed down. Today’s anglers learned from the watermen of the 60s and 70s who learned in turn from the early pioneers of Gulf Stream fishing.
“It’s just an incredible community ” Tennille says. “You help each other out. Whether it’s engine trouble or needing tackle or anything else you’re going to help if you can and you’re going to get help if you need it.”

Thompson says “I grew up in then moved here in high school and worked around the marina.” “Ben Smith Robbie Wolfe Rob Tennille Tripp Brice Kit Taylor — all those guys are the ones that taught me how to tie the knots hook the fish and rig the bait.”

Now there’s a new generation of kids around the marinas looking for a ride on the billfishing boats. Perhaps some of them will return to the dock one day aboard a boat flying a catch-and-release flag for each species.

“Every day there are kids around here getting started fishing ” Brice says. “The older guys are always looking for someone who can come along and help and that’s when they start to learn rigging and tackle. You can tell the ones who are going to gravitate towards it.”

It’s the excitement of the catch of hooking a fish that draws people in Tennille says.
“I’ve been out so many days that I had boat problems bad weather all those things ” he says. “But when the outrigger pin pops that moment — it could be a trash bag or grass on your rig or it could be the next world record of some species. That moment you don’t know. I still leap from a cooler lid to that rod with the same enthusiasm … that still gets me.”