Good Shepherd: The Path to Housing 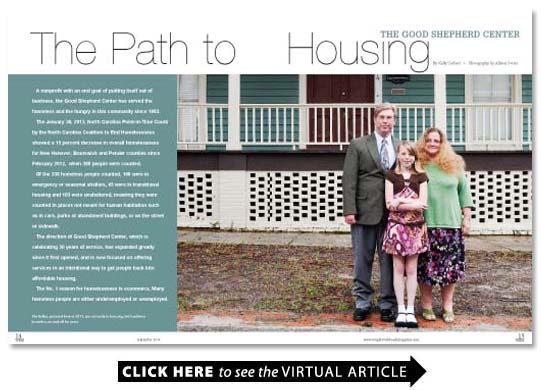 A nonprofit with an end goal of putting itself out of business the Good Shepherd Center has served the homeless and the hungry in this community since 1983.

The January 30 2013 North Carolina Point-in-Time Count by the North Carolina Coalition to End Homelessness showed a 15 percent decrease in overall homelessness for New Hanover Brunswick and Pender counties since February 2012 when 398 people were counted.

Of the 338 homeless people counted 190 were in emergency or seasonal shelters 45 were in transitional housing and 103 were unsheltered meaning they were counted in places not meant for human habitation such as in cars parks or abandoned buildings or on the street or sidewalk.

The direction of Good Shepherd Center which is celebrating 30 years of service has expanded greatly since it first opened and is now focused on offering services in an intentional way to get people back into affordable housing.

The No. 1 reason for homelessness is economics. Many homeless people are either underemployed or unemployed.

Kimberly Gatlin 44 says she made a bad choice leaving her employment at Verizon Wireless citing it as the reason she is homeless.

She is from Virginia and has no family in the Wilmington area.

Gatlin who is on the Good Shepherd housing plan has been staying at the center since March 25.

I thought I wasnt going to be able to open up she says. Everyone was so sociable. I thought it was a pretty good experience.

There is a common misperception of the average homeless person.

Theyre just regular people trying to figure out the next step says Logan White associate development director of Good Shepherd. I think thats important for people to realize most of the time when they see someone that they realize for sure is homeless its because theyre unique. Theyre a unique case whereas the average homeless person isnt going to be walking around shouting to the rooftops that theyre homeless and they need money.

Good Shepherd originally operated as a soup kitchen in the basement of a church. It now serves the tri-county area with a day shelter a night shelter social workers a medical clinic and mental health counselors.

Executive director Katrina Knight says while they are proud of the numbers of meals served and people sheltered the ultimate test is the reduction in homelessness and people moved to housing.

The criticism of a shelter is that if you dont do it in a very intentional way you really could just be a witness to people suffering and you really could just be doing nothing more than keeping them alive overnight Knight says. We want to figure out how to really end their homelessness and not just create a short- or a long- term home for people.

Theres no greater prevention of homelessness including for families than having adequate amounts of affordable housing Knight says.

Kay Blyths sister dropped her off at Good Shepherd Center on Feb. 5. She remembers when she first arrived she was in shock and would not talk to anyone.

Blyth 50 was left without anything when her 22-year marriage ended.

In Virginia she worked as an attendant caregiver for a child with Down syndrome. Blyth is now living down the street from Good Shepherd and looking for a retail or customer service job.

That would give me a chance to get back on my feet she says.

She relied on Good Shepherd for everything down to basic necessities like soap and shampoo. Working in the shelter made her gain back her sense of self-worth and responsibility.

She plans to set up an emergency fund so she never finds herself homeless again.

The Good Shepherd Center now located at 811 Martin Street opened in the 1980s when homelessness was becoming more visible in the United States and was increasing at a rapid rate in urban communities. The perception of homelessness moved away from just single men and instead grew to include working poor women children and entire families.

With the help of St. James Episcopal Church the nonprofit was able to expand move from the church basement and open a day shelter in 1987.

Part of Phase I of the shelter included the soup kitchen food redistribution and day shelter. Phase II included the creation of a 118-bed night shelter in 2005 for men women and families also with St. James financial support.

Jesse Jones 53 requested to come to Wilmington to finish out a 16-month prison sentence after having his license revoked for the 11th time.

He previously worked as a forklift operator at the North Carolina State Ports Authority and for a manufacturer in Ayden where he is from.

Good Shepherd is a good facility if people abide by the rules and regulations Jones says.

Jones was on Good Shepherds 90-day housing plan before staying with friends and now staying at Mercy House on Red Cross Street. Opened in October 1995 Wilmingtons Mercy House shelter is a 42-bed facility.

It doesnt matter where youre at it matters what your plan is Jones says. Wilmington is one of the best places on this earth for helping people.

Good Shepherds day shelter is designed more for the chronically homeless or people with disabilities or mental illness so they have a place to stay during the day.

We start where the client is; and if what theyre comfortable with is coming in and taking a shower every once in awhile great Knight says. Were going to try to learn their name were going to try to remember them next time they come in and be really warm and try to engage them. Sometimes over a period of months or years that develops into a willingness to try overnight.

The shelter is a wet shelter accepting homeless people who are under the influence of drugs or alcohol as long as they are not violent. But guests have to provide a birth certificate or social security paperwork undergo a background check and be searched for weapons drugs and alcohol before being housed in the shelter.

The shelter can sleep about 60 men and 28 women on separate sides. The family area has four private rooms allowing a limited number of parents to stay with their children as one unit.

The Sergeant Eugene Ashley Center located in a separate building on Colwell Avenue offers transitional housing to homeless veterans with a history of substance abuse through an 18-month program. Six apartments for permanent supportive housing were recently added to the Ashley Center.

Good Shepherd has done so much and its changed so much especially in the last ten years White says. Its almost backward of what people would think for the average homeless shelter. A lot of people either think of Good Shepherd as a soup kitchen or they think of it as a shelter and they dont realize all of the other stuff that goes on and how it all sort of fits together to create that path to housing. Because thats the real goal at the end of all of the programs we have is to a path to housing. The more people you can move into housing the people who are left are the tougher cases.

Michael Kelly 38 now lives in a duplex with his mother-in-law wife and daughter but had been homeless on and off since 2007 when his family lived in Clearwater Florida. Two years ago the Kellys rode a bus to Wilmington with a $4 000 income tax refund check. The money ran out and the family was homeless again.

They were sheltered in separate quarters at Good Shepherd for 30 days but Kelly said he did not like being separated from his wife and daughter. A spot opened up for them in the Wilmington Interfaith Hospitality Network a faith-based collaborative which provides homeless families with minor children temporary emergency shelter for up to three months.

The family graduated out of the hospitality network when Kelly found employment at the hospital and the family moved into its first transitional housing. From there it moved to permanent supported housing.

Michael Kelly has experience as a convenience store clerk and house painter among other things but is again unemployed. Section 8 housing vouchers to Kellys mother-in-law pay for the duplex they now share.

Good Shepherd Centers 30th anniversary will be formally celebrated during a Masquerade Ball on October 26 at the Hilton Wilmington Riverside.