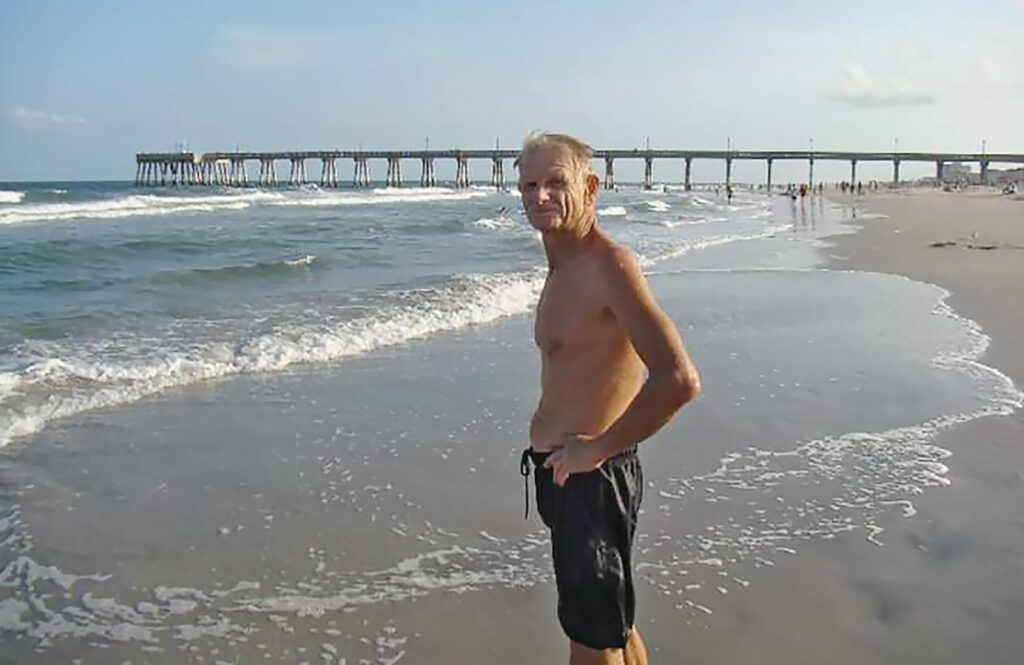 The high temperature where I live in Colorado is 8 degrees. I check the calendar, counting the days until summer. It can’t get here fast enough. Then his words come back to me. “Never cross off life.”

My interest in the refrigerator calendar’s colored Xs and sticky notes had prompted Uncle David’s words of wisdom: “It helps to see what day we are on but never, never cross off life.”

My husband’s Uncle David was born Feb. 27, 1939, and grew up in Fremont, North Carolina, with his older brother George and younger sister Mary Sue. He was extremely close with his mother Sue-Sue, as her grandchildren affectionately called her. He and Mary Sue were always the best of friends and his presence was significantly impactful in his niece and nephew’s upbringing.

Extremely health conscious, he took multiple walks and swims a day. One could spot him walking with his flip-flops tucked in the back of his swim trunks and whatever pair of sunglasses he’d most recently found washed up on the beach.

My husband’s uncle had a knack for leaving notes, making time, and finding room. Goggles hang on the nail in the carport, water goes in the OJ pitcher, socks can be worn with flip flops. Uncle David made sense of things in life.

Uncle David was like fresh beach air; taking him in made everyone feel relaxed and content. Never married, he was a low-maintenance man who surrounded himself only with things that were special and served a purpose. His home was a Wrightsville Beach cottage on Bay Street his mother had purchased decades before, near the one his aunt and cousin lived in.

When he renovated his domain, he spent many days retrieving relics around North Carolina making every inch unique, deliberate and rich with history. Most of the floors and walls were artifacts he hauled in his red truck from Fremont to Wrightsville, then sanded himself.

They serve as a constant reminder to his extended family of how Uncle David treasured things in life. He loved the ocean and made sure the Intracoastal Waterway was visible from almost every window.

He loved celebrating holidays with family. Every Fourth of July he hosted a cookout and fireworks viewing party, the highlight of everyone’s summer. He was pleased to do anything in preparation for the party — except cook.

One year he spelled NOEL in large letters on his house by the water, later discovering the E was backwards. A man with a good sense of humor who didn’t take himself too seriously, he kept that E backwards thereafter.

Years ago, we all slept in sleeping bags on the floor of the tiny room off his kitchen after Hurricane Floyd. When renovations happened, it created room for visiting adults to sleep in beds, even Uncle David’s. He always gave up his room, sleeping on the floor even in his 80s. He didn’t seem to mind, saying he got used to it while living in Japan and teaching PE.

Uncle David taught physical education in England, Turkey, Germany and the Philippines, before retiring home to the beach, but this didn’t mean an end to his adventures. In his 70s, he rode his bicycle solo from San Diego to Wrightsville Beach, as well as down the West Coast from Vancouver, Canada to the Mexican border.

Uncle David loved hearing others’ stories. “How’s your Daddy doing? Please tell your family to come over any time.” Friends became family, then heard the question Uncle David asked everyone: “Have we measured you?” It was a tradition. Uncle David measured children in the family annually and adults at least once. He documented new friends’ visits, noting their height, name and date on the wooden column by the stairs.

Cooking was not something he enjoyed, but eating was. In my last memory he was seated outside at the old plywood table, freshly showered after a sunset swim, the newspaper open to the sports page, his one beer of the day opened. I don’t remember what I cooked, only Uncle David’s enthusiastic reaction: “GREAT meal. Mmm. Great meal.”

He made me feel appreciated. I commented how much fun he was to cook for because he never cared what I made. His response sticks with me. “It’s not that I don’t care, it’s that it doesn’t matter.”

March 24, 2022 marked one year since Uncle David passed away. Summer isn’t the same without him.

I hope folks will remember him well: wear socks with flip flops, take a shower outside, sit a spell on his bench at the Loop, appreciate a meal. The world’s news can feel overwhelmingly sad, making Uncle David’s words more relevant than ever: stay measured, root for others, know what matters, and never cross off life.