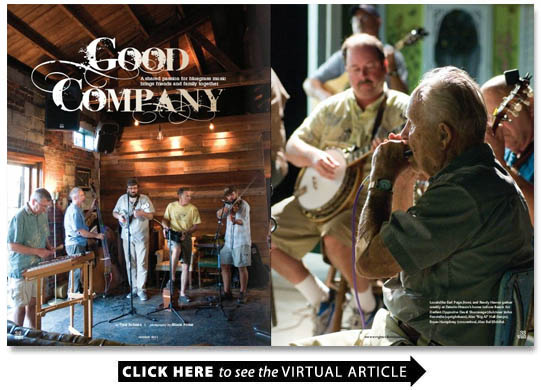 Fingers are resting on steel strings. A horsehair bow is poised ready to saw and a man is at the microphone waiting to exhale into his harmonica the first notes of an old bluegrass tune. These arent some yokels strumming on a porch. It is a Sunday night at the Satellite Lounge in downtown Wilmington and pickers of all ages have taken center stage.

The jam begins with strumming guitar the upright bass follows then the mandolin and vocals. Electrified by the hollow wooden instruments the room pulses with the chugging sound of hammer claw banjo picking and the high cries of the fiddle.

The audience claps and stomps and dances and sings and hollers.

The ensemble is a mingling of musicians of varying ages and musical backgrounds brought together by their love for good old fashioned bluegrass. To know how these aficionados came to be in such good company you must trace the history of bluegrass to its roots.

Bluegrass in the Cape Fear region began in 1967 when C.L. Reavis the lead member of the Cape Fear Ramblers opened the doors of his home to friends and family who shared his passion for picking. Every Tuesday night for more than three decades Wilmington musicians packed into Reavis home to share the joy of bluegrass.

“Everyone that played bluegrass in Wilmington learned right there on that front porch ” says John Privette Reavis grandson. Privette recalls joining his grandfather on stage with the Cape Fear Ramblers at the age of 11. The group often played for private parties and pig pickings around the Wilmington area.

“I learned how to play bluegrass by going to the festivals with my grandfather ” Privette says. “I would watch their fingers and jam with them. People watch my hands now.”

Jamming is an integral part of the beginning pickers education in bluegrass; in fact many bluegrass musicians argue that this is the best way to learn. Old tunes and traditions are handed down from generation to generation during these jam sessions perpetuating the rich cultural history locked inside the melodies and chords.

Age old tunes like “John Henry” and “Cripple Creek” are recognized throughout the bluegrass community as invaluable songs in a pickers repertoire. Although there are more contemporary bluegrass songs and many variations of the old hymns and ballads it is essential for new bluegrass musicians to familiarize themselves with the original arrangements.

“Interpretations of the music are penciled in the structure of the song ” says longtime bluegrass musician Derwin Hinson. “Someone might change the song adding a minor chord where there should be a major chord to give it a little bit of flare. If someone gets too far away from the tune though they lose the crowd.  They will lose the attention of the ones who really appreciate it.”

Musical integrity is something that Hinson believes should be preserved in bluegrass but considering the progressive nature of the music this may be easier said than done. For traditional bluegrass to remain relevant to more modern generations sometimes modern interpretations are needed to create a connection with younger audiences.

“The new generations of bluegrass musicians are keeping up with the tradition of borrowing from different musical styles and making it their own ” says John Fonvielle the host of the Magnolia FatBack Folk Hour radio show on WHQR 91.3 FM. He describes how multiple genres like jazz and the blues have come to influence bluegrass.

“They add a little more to the sauce ” Fonvielle says.

Like many of todays young bluegrass bands the members of Possum Creek Bluegrass Band never set out to become bluegrass musicians when they first picked up their instruments. The bands mandolin player Jones Smith was originally in a punk band. It wasnt until he entered college that he first started playing bluegrass. The music genre offered something different than what he had experienced musically before culture.

“Southern culture was looked down upon for awhile and some people try to shake it ” Smith explains. “There is not a lot to point to and say hey this is my culture. I think people can hear bluegrass and say I can be accepted into this and feel proud to be who I am.”

It is this connection to the past that appeals to a wide audience. From good ole boys to suburban teenagers bluegrass has a tightening grip as a staple music genre in the southeast.

“I found a jug band album and couldnt listen to anything else ” musician Kellie Everett explained. Fascinated by an increasingly obscure branch of bluegrass she began playing the banjo; however she enjoys playing a washboard modified with tin objects that she found in the trash. At the Satellite jam she is the sole percussionist save for a guest spoon player.

“It is just an infectious type of music ” explains Bob Stroud another musician participating in the weekly bluegrass sessions. “Once you get hooked on it it is hard not to play.”

Aside from the bluegrass jam at Satellite there are other pockets of pickers throughout the Cape Fear area. For example Hinson hosts his own jam Derfest every Thursday night at his home in Kure Beach. Sitting on the front lawn of the Hinson household spectators and musicians experience a feeling of camaraderie as the band plays through the summer evening.

“The purpose of our jam is fellowship for the people who come almost every week to play or to listen ” Hinson says. “It is also for folks who dont have anyone to play with and gives them a chance to be a part of something. It helps the ones that are learning to hone in on their instrument and skills. We never play down to someone elses level. Beginners have to play beyond their level to learn.”

Hinson is a man of many instruments and performs as a one-man band in his bluegrass gospel ministry. On stage he runs from instrument to instrument playing old hymns and adding his own flavor to each song.

“There are a lot of old hymns that I like to put my stamp on ” he says. “I make it a Derwin song without it losing its familiarity.”

Back at the bluegrass jam at the Satellite Lounge people cram into the barn-like structure. Children and adults dance to the rhythmus plucking and twanging while loose dogs run between their legs. Some stand with their backs pressed against the splintered wooden wall clapping their hands and singing along.

Surrounded by old oil paintings and charcoal portraits its like stepping back in time and absorbing the culture. Engaging bluegrass captures the soul and brings it home.

“When you go see a live bluegrass show its like youre putting your feet in the dirt a little bit ” Jones Smith says. “You may start realizing where you are coming from.”