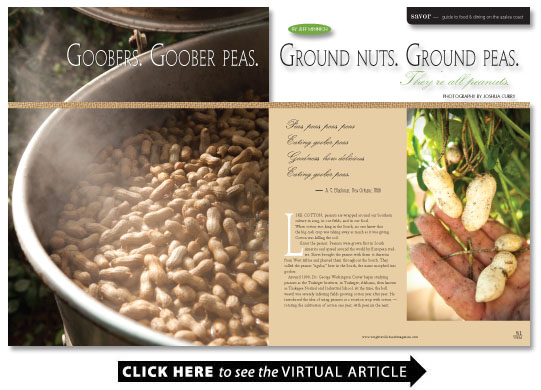 Like cotton peanuts are wrapped around our Southern culture in song in our fields and in our food.

When cotton was king in the South no one knew that the big cash crop was taking away as much as it was giving. Cotton was killing the soil.

Enter the peanut. Peanuts were grown first in South America and spread around the world by European traders. Slaves brought the peanut with them to America from West Africa and planted them throughout the South. They called the peanut nguba; here in the South the name morphed into goober.

Around 1900 Dr. George Washington Carver began studying peanuts at the Tuskegee Institute in Tuskegee Alabama then known as Tuskegee Normal and Industrial School. At the time the boll weevil was severely infesting fields growing cotton year after year. He introduced the idea of using peanuts as a rotation crop with cotton rotating the cultivation of cotton one year with peanuts the next.

By doing so the infestation cycle was broken and the fertility of the soil replenished at the same time.

Carver saw the benefits of growing the peanut for its versatility. He developed more than 300 uses for the peanut during his research including food sources cosmetics and industrial products. He is known as the father of the peanut industry and his research and innovations helped save the Souths economy.

Not actually a nut the peanut (Arachis hypogaea) is in the bean pea or legume family Leguminosae. Like all legumes it has the wonderful property of utilizing nitrogen in the atmosphere. The nitrogen is pulled into the soil and converted into other forms which can be utilized by growing plants thus enriching the soil.

Peanuts grow in a very curious way. The plants mature at about 18 inches to two feet high. The yellow flowers are pollinated. Then the branch on which the flowers are borne takes a turn and heads downward toward the soil. The branch with its maturing fruit or peg penetrates the soil. The peanut develops underground. It takes about 120 days for a peanut crop to mature.

Harvesting is a two-step process. First the plants are lifted by a peanut digger that shakes then inverts the peanuts and on the ground where they dry for two or three days. A combine separates nuts from vines in the second step. From there they go on to further curing and then they are sorted graded and packaged or processed for other uses.

Prior to the Civil War peanuts were considered poor mans food or feed for ­animals. Peanuts were difficult to grow and harvest. When food became scarce during the Civil War soldiers and others turned to the peanut for food. After the war the soldiers took peanuts home with them and peanut consumption spread.

Peanuts were grown here for their oil explains Caryl Finn docent at Poplar Grove. They were bagged and shipped to Wilmington to make oil for lubrication [and] lamps.

As a food source peanuts are high in protein vitamins and minerals. They are naturally cholesterol-free. The fat in peanuts is about 85-percent unsaturated the good kind. They contain dietary fiber. Peanuts have a low glycemic index so they are a good food for diabetics.

There are four varieties of peanuts grown today for processing: the Virginia which has the largest fruit and is the primary peanut grown in Virginia and the Carolinas the runner Spanish and Valencia.

Popularity and production increased after the World Wars. These days peanuts have become a big business. In southeastern North Carolina peanuts are grown primarily in Bladen and Duplin counties. Farther north there are many growers from Edenton into southern Virginia. Peanuts are also grown in Horry County South Carolina.

About 60 percent of all the peanuts grown in the U.S. are utilized for peanut butter says Niles Brisson president of Houstons Peanuts in Dublin North Carolina. The rest are pretty evenly divided into other categories in-shell candies cocktail nuts and other peanut products.

Poplar Grove docents educate adult visitors and children about the local history of peanut growing. A Livermon picker and other equipment are on display as well as chronological display boards.

Poplar Grove has a popular farmers market every Wednesday morning from April into November says Jeanne Walker public relations director for Poplar Grove. Hampstead Peanuts has a booth and they sell boiled and roasted peanuts as well as homemade peanutbutter.

Astronaut Alan Shepard took a peanut to the moon.

And the beloved popular comic strip Peanuts has become part of our culture.

Peanut butter was introduced in 1904. It takes 540 peanuts to make a 12-ounce jar of peanut butter. Peanut butter is made by grounding dry roasted peanuts and making a paste. Women and kids prefer the creamy; men prefer the crunchy as a rule.

Peanut oil is used in cooking particularly in frying because of its high smoke point and mild flavor. Its also one of the healthiest cookingoils.

Peanut soup recipes have been around for 400 years.

Peanut brittle is a candy made by heating sugar and water adding nuts pouring onto a flat surface for cooling and breaking into pieces when cool. Boiled peanuts are raw or green peanuts boiled in salty water until soft. They have been popular in the South for more than a century. Boiled peanuts are high in antioxidants.

Cook caramels and 1/4 cup cream in small saucepan over low heat stirring until caramels are melted. Spread over marshmallow layer. Cool until set.

Crush 16 cookies; toss with the butter. Press into an ungreased 9-inch square dish; set aside.

In a large bowl beat the cream cheese peanut butter and 1 cup confectioners sugar until smooth. Fold in half of the whipped topping. Spread over crust. Sprinkle with peanut butter cups.

Preheat the oven to 350 degrees. Line 12 muffin cups with paper liners and set aside. In large bowl combine 1/2 cup peanut butter and softened butter and beat well until combined. Add sugar and brown sugar and beat until light and fluffy. Add eggs and vanilla and beat well.

Bake for 20-25 minutes or until muffins spring back when touched in center. Remove to wire racks to cool.

Bake 30 to 40 minutes or until cheesecake layer is set and edges are light golden brown. Cool on cooling rack 30 minutes. Refrigerate 40 minutes.

In small microwavable bowl microwave chocolate chips and cream uncovered on high 40 to 60 seconds or until chips are melted; stir until smooth. Spread over cheesecake layer. Sprinkle with remaining toffee bits. Cool completely about 1 hour. For brownies cut into 6 rows by 6 rows.

The peanut harvest signals the season of rich hearty dishes. The deep flavors are perfect for cooler weather. Flavors can be twisted or turned using a complexity of ingredients or they can be allowed to stand on their own. Think of tomatoes: eat them right off the vine or cook them into a rich sauce. Peanuts are just as versatile.

1 (28 ounce) can crushed tomatoes with liquid

Salt and seasoning to taste

Place them in a stainless steel kettle. Fill it with water and turn on the heat until it reaches a boil.

Then turn down the flame and let simmer for about 10-12 hours stirring every so often until ready. Test taste. When ready turn off the heat. Add salt and seasoning. Stir and let sit overnight. Bag peanuts. Reserve some brine to freeze. Reheat peanuts in brine before serving.

Melt peanut butter and butterscotch morsels together in heavy saucepan over low heat. Mix in noodles and peanuts until all ingredients are well moistened. Form little clusters on foil or waxed paper and allow to harden.