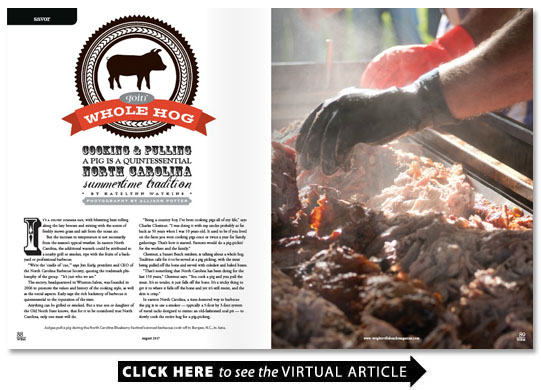 It’s a sultry summer day with blistering heat rolling along the lazy breezes and mixing with the scents of freshly mown grass and salt from the ocean air.

But the increase in temperature is not necessarily from the season’s typical weather. In eastern North Carolina the additional warmth could be attributed to a nearby grill or smoker ripe with the fruits of a backyard or professional barbecue.

“We’re the ‘cradle of ‘cue ‘” says Jim Early president and CEO of the North Carolina Barbecue Society quoting the trademark philosophy of the group. “It’s just who we are.”

The society headquartered in Winston-Salem was founded in 2006 to promote the values and history of the cooking style as well as the social aspects. Early says the rich backstory of barbecue is quintessential to the reputation of the state.

Anything can be grilled or smoked. But a true son or daughter of the Old North State knows that for it to be considered true North Carolina only one meat will do.

“Being a country boy I’ve been cooking pigs all of my life ” says Charles Chestnut. “I was doing it with my uncles probably as far back as 50 years when I was 10 years old. It used to be if you lived on the farm you were cooking pigs once or twice a year for family gatherings. That’s how it started. Farmers would do a pig-pickin’ for the workers and the family.”

Chestnut a Sunset Beach resident is talking about a whole hog. Tradition calls for it to be served at a pig picking with the meat being pulled off the bone and served with coleslaw and baked beans.

“That’s something that North Carolina has been doing for the last 150 years ” Chestnut says. “You cook a pig and you pull the meat. It’s so tender it just falls off the bone. It’s a tricky thing to get it to where it falls off the bone and yet it’s still moist and the skin is crisp.”

In eastern North Carolina a time-honored way to barbecue the pig is to use a smoker — typically a 5-foot by 3-foot system of metal racks designed to mimic an old-fashioned coal pit — to slowly cook the entire hog for a pig-picking.

reg Brooks of PigMasters in Greensboro describes the preparation process as “butterflying” the pig: splitting it down the middle then placing it atop the racks skin-side up so that every part can cook evenly at roughly 125 degrees for 10-12 hours.

“They are a rarity now mostly because not everyone has a good smoker or the time to do it right ” Brooks says.

His business specializes in pig-pickings for corporate events and family get-togethers where cooking the whole pig and letting guests choose their favorite parts straight from the source has what he calls a “novelty effect.”

But even if a lack of equipment and time deters backyard cooks from cooking the entire pig there are others who do so for catered barbecues as well as for competitive purposes like Scott Ramsey a competition-grade pig cooker. Though his family-run business Ramco Machine and Pump Service out of Leland tends to monopolize much of his time it hasn’t stopped him from pursuing another activity that strikes close to home.

“I’ve been competing two years now ” Ramsey says. “My first competition I placed fifth out of 20 at the North Carolina Blueberry Festival.”

Ramsey did better at this year’s blueberry festival placing second. It helped to have Chestnut a 23-year veteran at competitive pig cooking by his side.

“I probably won in 23 years about 75-80 trophies ” Chestnut says. “I do more mentoring now. I will go out there and work with somebody and show them exactly how I done it.”

Ramsey entered the arena of competitive cooking after years of volunteering his services and his smoker for church events neighborhood gatherings and family affairs. He quickly realized it was going to be a challenge.

“When I got to the cook meeting they said ‘no sauce allowed ‘ and I was so surprised ” Ramsey recalls. “I said ‘I might as well go home now.'”

At any casual function he flavors the pig with his signature sauce throughout the cooking process. For a competition the professionals may only use the basics for consistent results and fair judging: baking soda cooking oil and salt.

contest begins typically around 8 p.m. the night before when the pigs are delivered to the competitors and ends with judging the next morning.

“It’s an all-night thing ” Chestnut says. “You get up Friday morning and you don’t go to bed until Saturday night. You don’t put the pig on and go to sleep.”

The pigs are between 120-130 pounds; the smaller the pig the lower the fat content and the more difficult they are to cook well on a smoker Ramsey says. When he’s catering a pig-picking for around 100 he shops for a pig weighing about 135 pounds.

The two key things that Ramsey says are imperative to remember during a competition cook-off are that all blood must be drawn from the pig to avoid black marks in the meat and that the animal’s core temperature must be at minimum 140 degrees to avoid disqualification.

For the tasting portion of the competition judges are seated before actual place settings as though they are attending dinner at a friend’s house and generally stick to set criteria regarding the quality of the barbecue they’re served: appearance brownness moisture taste and overall condition of the site to name a few.

“The most critical part is the skin ” Chestnut says. “There can’t be soft spots. It has to be like a bag of potato chips. When they break into it it has to crack. You can probably hear it for 50-60 feet.”

Ramsey agrees on the importance of the crispness of the skin.

“It sounds like tapping on glass ” he says. “Or it should anyway. They call it ‘blond ‘ that perfect place where the skin is crispy but not too burnt.”

The North Carolina Pork Council publishes a point system that judges use at each sanctioned event. It takes 5 000 points to become a pit master the ultimate goal. Some competitions award cash prizes to up to five placing competitors — Ramsey earned $700 at the blueberry festival which he split with Chestnut — but he says most contestants are more interested in bragging rights.

Earning those bragging rights can be addictive.

“It’s a hobby but it quickly turns into a fulltime hobby ” Chestnut says. “The more you do it the better you get. It becomes a passion especially if you are winning.”

The desire to be the considered the best motivates a lot of North Carolina barbecue cooks. So does the desire to uphold the state’s cherished traditions.

Early president of the North Carolina Barbecue Society found those traditions vary by region when he traveled all over the state for his in-depth investigation of Southern barbecue “The Best Tar Heel Barbecue: Manteo to Murphy ” published in 2002.

He also found the tradition of cooking the whole pig is becoming a rare practice for backyard cooks.

“Now most people are just too busy to put in the time it takes to prep and cook the pig that way; it is a ton of work ” Early says.

The society is doing its part to keep it alive by teaching whole-hog cooking during the three annual cooking school sessions it conducts across the state.

“Cooking that pig is the ‘wow factor’ of the schools ” Early says. “It’s not like cooking a chicken after all.”

Ramsey can attest to that fact given that his days at a pig-cooking competition can be grueling. The cooking portion runs 12 hours and then there’s the judging and award ceremony before he can pack up his smoker and tent and head home.

Despite the work and sometimes the risk in coming up short with the judges Ramsey maintains that cooking for others whether in someone’s backyard or on festival grounds is worth the effort.

“It’s something I love doing it doesn’t really matter where or why ” he says.

Whether for competition or for a backyard celebration cooks like Ramsey and Chestnut continue the state’s traditions ensuring eastern North Carolina’s summers still smell of sea salt warm grass and the rich scents of a well-roasted pig.