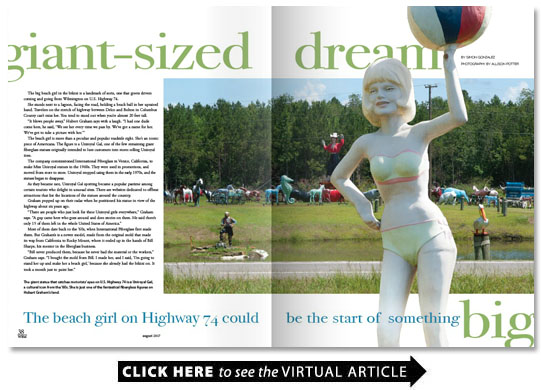 The big beach girl in the bikini is a landmark of sorts one that greets drivers coming and going from Wilmington on U.S. Highway 74.

She stands next to a lagoon facing the road holding a beach ball in her upraised hand. Travelers on the stretch of highway between Delco and Bolton in Columbus County can’t miss her. You tend to stand out when you’re almost 20 feet tall.

“It blows people away ” Hubert Graham says with a laugh. “I had one dude come here he said ‘We see her every time we pass by. We’ve got a name for her. We’ve got to take a picture with her.'”

The beach girl is more than a peculiar and popular roadside sight. She’s an iconic piece of Americana. The figure is a Uniroyal Gal one of the few remaining giant fiberglass statues originally intended to lure customers into stores selling Uniroyal tires.

The company commissioned International Fiberglass in Venice California to make Miss Uniroyal statues in the 1960s. They were used in promotions and moved from store to store. Uniroyal stopped using them in the early 1970s and the statues began to disappear.

As they became rare Uniroyal Gal spotting became a popular pastime among certain tourists who delight in unusual sites. There are websites dedicated to offbeat attractions that list the locations of the statues around the country.

Graham popped up on their radar when he positioned his statue in view of the highway about six years ago.

“There are people who just look for these Uniroyal girls everywhere ” Graham says. “A guy came here who goes around and does stories on them. He said there’s only 15 of them left in the whole United States of America.”

Most of them date back to the ’60s when International Fiberglass first made them. But Graham’s is a newer model made from the original mold that made its way from California to Rocky Mount where it ended up in the hands of Bill Sharpe his mentor in the fiberglass business.

“Bill never produced them because he never had the material or the workers ” Graham says. “I bought the mold from Bill. I made her and I said ‘I’m going to stand her up and make her a beach girl ‘ because she already had the bikini on. It took a month just to paint her.”

She was his first statue but not his last. A second became a cowgirl. She stands on a 10-foot fiberglass rock in a field behind the lagoon looking out over a herd of longhorn steers. A third one lies in the grass behind Graham’s house waiting to be painted.

“She will be an Indian girl ” he says. “She’ll stand in the back Indians and rearing horses.”

He’s planning to create a fourth a black woman who will have two black panthers with her.

The new statues might attract more Uniroyal Gal spotters but that’s not why Graham is creating them. They will be among the attractions for Grahamland the amusement park he intends to create on his property.

“I’m going to put animals on motorized bases ” he says. “When the motor comes on it’ll spin the animals. You’ll be able to ride a horse a bull an ox a rooster a bear — any animal that’s here you’ll be able to ride. There’ll be mini-golf over here on the right. I’ll have the heads with the holes in their mouth so you’ll be able to putt the ball into the mouth of the animals. Boo-Boo Bear will be at the 10th hole. If you make a hole-in-one you’ll get a T-shirt that says ‘I made a Boo-Boo at Grahamland.'”

His dream includes a seafood restaurant with a replica of the Cape Hatteras Lighthouse on the roof talking cars and flying horses.

It seems like a grandiose undertaking but spend a few minutes talking with Graham and it’s easy to catch his vision. Especially when you look around and see what he’s already created. There are fiberglass animals everywhere — flamingos horses chickens cows a pair of seahorses pulling a wagon.

“This is all God ” he says. “God created this. God is making all this happen. I’m only the shepherd.”

The idea for the amusement park can be traced back to a burglary in 1996.

“We had a break-in in the house ” Graham says. “I said ‘I’m going to put something outside the road that’s going to start recording people and the lights will come on when they break the beam.'”

Graham made a couple of 8-foot metal lighthouses with lights on the top.

“We plugged them in and bam everybody said ‘Where’d you get the lighthouses?'” he says. “I said ‘I made them.’ Then people started ordering them. I started selling a few here and there but it wasn’t a big booming business.”

Graham’s lighthouses were severely damaged in a hailstorm. He wanted to replace them with something that would stand up to the weather. He found Sharpe who not only made him a couple of fiberglass lighthouses but taught Graham how to do it himself.

“I started making them ” Graham says. “Then Bill said ‘Listen I’m planning on going out of business. I’ve got all these molds here.’ So I started buying molds a few at a time.”

He cleared some trees from the front of the property and began to populate the field with his creations — lighthouses animals the Uniroyal Gals. Gradually the vision for Grahamland began to take shape.

“Albert Einstein said knowledge doesn’t come from learning things ” he says. “Knowledge comes from imagination. I’ve had this in my mind and now I’m making it happen with my own hands. A lot of people can dream. But when you can do it with your own hands and mind then you can make it happen.”

Graham says he has 225 pieces now but wants to make 750. They will include 50 winged horses flying overhead on a ski lift.

“I want their legs to move I want their wings to move and their head to move from side to side ” he says. “I already do the lighthouses. The motor makes the light turn; I can make them do just about anything. Now I want to make the rest of the animals do automated things. When I was a little boy I always read this comic book called Richie Rich. Everything he had was animated and automated. It was like a world from the future. And that world he lived in it’s here today.”

Much of Graham’s motivation comes from an incident that happened in 1974 when he was the only black child in a school choir that sang at an all-white church in Columbus County.

“All of a sudden the pastor tapped me on the shoulder ” Graham says. “He said ‘It’s not me but the people don’t want you here.’ He took me in his car. I couldn’t do anything but cry. I never could understand why. It’s just the color of your skin. You’re not going to be equal to them and have the things they have.”

Grahamland is his way of proving them wrong.

“There’s never been a black man own a theme park ” he says. “It will support all these jobs. For someone black to be doing something great in this area. � The last black guy who did great is that artist who died Ivey Hayes.”

Graham still has a long way to go to make the dream a reality. There are funds to raise and hundreds of pieces to build and automate. But he doesn’t doubt that it will happen.

“People questioned Disney; you’re going to do what with this mouse?” he says.

In the meantime there will be the occasional visitor stopping by drawn by the big beach girl out front.