Get Your Records On 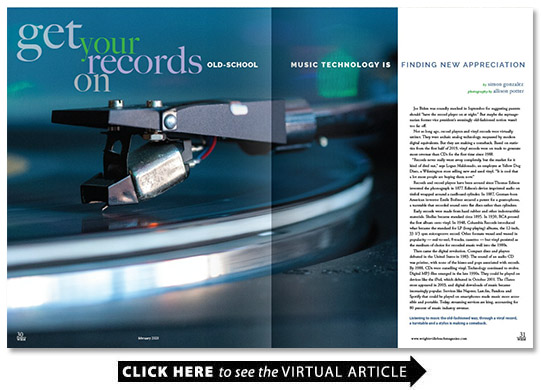 Joe Biden was roundly mocked in September for suggesting parents should “have the record player on at night.” But maybe the septuagenarian former vice president’s seemingly old-fashioned notion wasn’t too far off.

Not so long ago record players and vinyl records were virtually extinct. They were archaic analog technology surpassed by modern digital equivalents. But they are making a comeback. Based on statistics from the first half of 2019 vinyl records were on track to generate more revenue than CDs for the first time since 1988.

“Records never really went away completely but the market for it kind of died out ” says Logan Maldonado an employee at Yellow Dog Discs a Wilmington store selling new and used vinyl. “It is cool that a lot more people are buying them now.”

Records and record players have been around since Thomas Edison invented the phonograph in 1877. Edison’s device imprinted audio on tinfoil wrapped around a cardboard cylinder. In 1887 German-born American inventor Emile Berliner secured a patent for a gramophone a turntable that recorded sound onto flat discs rather than cylinders.

Early records were made from hard rubber and other indestructible materials. Shellac became standard circa 1895. In 1930 RCA pressed the first album onto vinyl. In 1948 Columbia Records introduced what became the standard for LP (long-playing) albums the 12-inch 33 1/3 rpm microgroove record. Other formats waxed and waned in popularity — reel-to-reel 8-tracks cassettes — but vinyl persisted as the medium of choice for recorded music well into the 1980s.

Then came the digital revolution. Compact discs and players debuted in the United States in 1983. The sound of an audio CD was pristine with none of the hisses and pops associated with records. By 1988 CDs were outselling vinyl. Technology continued to evolve. Digital MP3 files emerged in the late 1990s. They could be played on devices like the iPod which debuted in October 2001. The iTunes store appeared in 2003 and digital downloads of music became increasingly popular. Services like Napster Last.fm Pandora and Spotify that could be played on smartphones made music more accessible and portable. Today streaming services are king accounting for 80 percent of music industry revenue.

During the ascendancy of the new technology vinyl remained a favorite of audiophiles who preferred its rich warm resonance over the compressed sterile sound of digital replacements but that was a miniscule market. Sales reached a nadir in 2006 dipping below 1 million units. Since then they have grown every year. In 2018 16.8 million LPs were sold in the U.S. They were on track to surpass those numbers in 2019. While still only accounting for about 4 percent of all music sales it seems that records are off the endangered species list.

“Part of it is everything comes back around right?” says Catherine Hawksworth owner of Modern Legend a downtown Wilmington store selling new vinyl. “And the trend aspect of it. It’s like everything the ebb and flow. It goes out and comes back in.”

Tim Freeman owner of Yellow Dog Discs has experienced the depths and the rebound. The store was established in 2000 as an outlet for used music videos and games. He made the questionable decision to add vinyl to the inventory when he took over in 2004.

“All we had was CDs and DVDs ” he says. “I introduced records. Everybody thought I was crazy. It wasn’t a big boom all of a sudden. There was a bit of an underground market here for it. The local collectors slowly found out and started coming in. It grew from there.”

The store still sells used CDs DVDs and video games but “vinyl is the main focus right now ” Freeman says. The records are sold to customers like Sarah Hager a 76-year-old who is browsing the bargain box where every record is priced at $1 sold as is.

“I’m just seeing if they have any of my favorites ” she says. “I love all kinds of music. It’s whatever gets my fancy at the moment.”

She picks out a couple to add to her extensive collection which numbers at least 300. Just about every day in just about any room in her house she’ll listen to a record or two.

“Just recently I bought a portable turntable that I can carry around with me ” she says. “I put it on the countertop when I’m cooking. I just like the way they sound and I like the way they look. And if you get tired of them you can make a dish out of them. Really we did that in Girl Scouts. We made dishes out of the worn-out vinyl.”

What’s the appeal? Perhaps it’s a counter revolution a form of analog rebellion in an impersonal digital age. Listening to an album requires some level of commitment. Take the old record off the shelf place in on the turntable and use a brush and cleaning fluid to remove the dust. Switch on the turntable move the tone arm to the edge and place the stylus on the vinyl. Sit back and enjoy often while reading the liner notes. And of course when Side A is finished turn it over and play Side B.

“I think it’s the tactile part of actually having that item in your hands and looking at the cover and looking at the liner notes reading where it was recorded who played on the record ” says Chuck Spry who works at Gravity Records. “There’s no intimacy in listening to something on a streaming service. Sitting there with a glass of something watching a record spin and listening to it is a lot different than saying ‘Hey Alexa play this.'”

Gravity Records on Castle Street in Wilmington is a throwback to the heyday of record stores back when classic rock was just rock. Customers browse through an extensive selection of used LPs organized by genre. They pick up an album check out the artwork then flip it over to check out the track listings and musicians. They can talk to the employees about music chat about their favorite bands and get recommendations.

“It’s nice to be able to talk to people about something you’re passionate about ” Spry says. “Some young kid came in a couple of weeks ago and said he liked Rush and some other bands. I said you need to listen to Yes’s Fragile album. You’ll probably like it. He came back a week or two later and was like ‘I love that record.'”

That’s not a feature of the digital world. Sure Amazon Pandora and Spotify will give recommendations but it’s not the same as actually being in a store and talking with fellow music lovers. And clicking through an online playlist isn’t the same as picking up and holding an album.

“I love looking at album covers and looking inside reading who was in the band ” says Rodney Petersen 56 a Gravity Records shopper. “It’s fun to go back and say ‘I didn’t know he played on this album.'”

Petersen typifies many record buyers. He grew up listening to LPs then switched to newer more convenient digital formats. He held on to some of his old records but never played them. Now he’s frequently out looking to add to his collection.

“Five or six years ago I started getting back into it ” he says. “It’s the thrill of the hunt. I used to go to thrift stores Goodwill Salvation Army. You could get albums and pay $3 or $4. Now that it’s getting more popular you have to go to record stores like this. It brings you back. No cell phones just music. You just listen to the music.”

Buyers like Hager and Petersen are looking for music they grew up with — albums they used to own or singers and bands they liked back in the day. But the record revival is not just old folks on a nostalgia kick. Yellow Dog Discs is just north of the University of North Carolina Wilmington and students frequent the store.

“We sell lots of vinyl to the college kids ” Freeman says. “Their mom and dad got them a turntable for their birthday or Christmas and they’ll come in and buy some records. Or they’ll say I never listened to records before but I got my dad’s old turntable and his collection from the ’70s and I’m digging it so I thought I’d come in. Next thing you know they’ve got the bug and they’re in here every week buying stuff. It’s a black hole you can fall into.”

Hawksworth who is 27 also reaches beyond the nostalgia market at Modern Legend. A significant part of her inventory is albums recorded by current artists.

“A lot of the customers especially around my age will come in and get the new releases the modern music that’s coming up ” she says.

Regardless of the age of the collector or the genre of music playing a record still requires a turntable and speakers. But there are contemporary upgrades to the old technology. Back then the turntable might have sat atop an audio rack. Lower down were the tuner amplifier and cassette deck. It all was played through huge floor-standing speakers with big woofers and tweeters. These days there are Wi-Fi turntables that stream music through Bluetooth speakers.

They still play old-fashioned vinyl but there are major changes there too. Anyone shopping for new records a few decades after last buying them is going to experience sticker shock. The cost has gone up. A lot. The average cost of a new album is about $25.

One thing that hasn’t changed is the experience of unwrapping the plastic of a just purchased record anticipating what’s inside — “It’s like a gift ” Hawksworth says — putting it on the turntable and listening to a complete album.

“People could listen to any platform Spotify or whatever and they’re choosing to come in and be part of this whole experience of listening to a full record ” Hawksworth says. “It’s so much more rewarding than just pressing a button.”