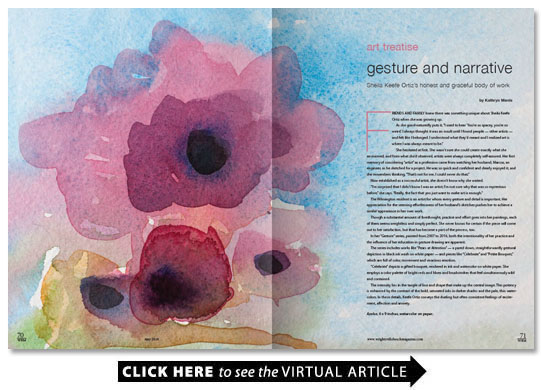 Friends and family knew there was something unique about Sheila Keefe Ortiz when she was growing up.

As she good-naturedly puts it “I used to hear ‘You’re so spacey you’re so weird.’ I always thought it was an insult until I found people — other artists — and felt like I belonged. I understood what they’d meant and I realized art is where I was always meant to be.”

She hesitated at first. She wasn’t sure she could create exactly what she envisioned and from what she’d observed artists were always completely self-assured. Her first memory of considering “artist” as a profession came from watching her husband Marcos an engineer as he sketched for a project. He was so quick and confident and clearly enjoyed it and she remembers thinking “That’s not for me I could never do that.”

Now established as a successful artist she doesn’t know why she waited.

“I’m surprised that I didn’t know I was an artist; I’m not sure why that was so mysterious before ” she says. “Really the fact that you just want to make art is enough.”

The Wilmington resident is an artist for whom every gesture and detail is important. Her appreciation for the seeming effortlessness of her husband’s sketches pushes her to achieve a similar appearance in her own work.

Though a substantial amount of forethought practice and effort goes into her paintings each of them seems weightless and simply perfect. She never knows for certain if the piece will come out to her satisfaction but that has become a part of the process too.

In her “Gesture” series painted from 2007 to 2016 both the intentionality of her practice and the influence of her education in gesture drawing are apparent.

The series includes works like “Pears at Attention” — a pared down straightforwardly gestural depiction in black ink wash on white paper — and pieces like “Celebrate” and “Petite Bouquet ” which are full of color movement and vivacious emotion.

“Celebrate” depicts a gifted bouquet rendered in ink and watercolor on white paper. She employs a color palette of bright reds and blues and brushstrokes that feel simultaneously wild and contained.

The intensity lies in the tangle of line and shape that make up the central image. This potency is enhanced by the contrast of the bold saturated inks in darker shades and the pale thin watercolors. In these details Keefe Ortiz conveys the dueling but often coexistent feelings of excitement affection and anxiety.

Keefe Ortiz met her husband while working as a university secretary but it would be a few more years before she returned as a student herself after earning bachelor’s degrees in studio art and art history as well as a Master of Education.

Early in her studies she experimented with gesture drawing — a technique using line alone to capture the most basic essence of the subject and to establish mood and tone. This was formative to the development of her personal style.

“I started with gesture and went from there ” she says. “It had a huge impact on my work. I wanted to do a lot more and have done a lot more but gesture is my favorite. It’s really in everything I make and I still find it so beautiful.”

This influence is visible even in her most heavily abstracted pieces. In a series of watercolors made at Wrightsville Beach and Fort Fisher she captures the core spirit of North Carolina nature by allowing the elements themselves to influence her.

“I sat there with my paper and brush and looked around me ” she says. “I let the wind move my hand across the paper and let sand blow it and let nature paint the painting. I wanted to let go of trying to control it to stop getting in the way.”

The resulting images are simple and delicate. “Wrightsville Beach NC” captures the layered horizon over the sand and sea. In dripping applications of yellow green purple and blue with spherical shapes layered on top of light washes Keefe Ortiz depicts a soft beach view. The image is abstracted down to simple shape and color and appears hazy as though pictured through a dream or fading memory.

The piece has literally captured a beach scene’s most basic elements: colors for sand water and sky and layers in the picture plane that recall their meeting on the horizon. It also captures the mood of Wrightsville: relaxed colorful and welcoming.

Not content with one style or subject Keefe Ortiz’s approach to painting allows her to learn things about herself as well as share something with the world. Working predominantly in series she explores her own feelings and their more universal implications. In particular place and time are a shared narrative in much of her work. This is not surprising given the many different places she has lived and the jobs she has held including devoted mom to two boys.

In the “Playground” series she utilizes the still life genre to create intimate and lighthearted vignettes of childhood. This series was initially influenced by her teaching career. Many of the objects depicted were collected for use in still life setups for her young students. Keefe Ortiz realized she’d unintentionally created an ongoing nostalgia-flavored story.

“I have a lot to say and I didn’t even know that ” she says. “Every part of it seems to have a narrative in it about time and place. Before my [art] education I was also interested in anthropology archaeology and artifacts what meaning a place holds that type of thing. So I think that interest has always been there.”

Keefe Ortiz poses whimsical artifacts of childhood — storybooks toys and dolls — in various stages of realism. The colors are bright primary and emphatically cheerful and recall color schemes from nurseries and kids’ bedroom walls. The facial expressions of many of the toys are amused sometimes seeming to smirk at the viewer.

In varying the style arrangement and context of the figures Keefe Ortiz encourages the viewer to read a story in their progression.

In “Playground ” done in acrylic on canvas the spirited creatures are depicted with three-dimensional realism and set inside a comforting powder-blue palette. The scene includes bright yellow and green spotted giraffes a small bluebird and a pillowy white llama in a charming Christmas scarf. None of these characters look directly ahead but viewers can feel their sideways stares.

The collected toys also appear in “Hush Little Baby ” abstracted to simple shapes and colors on top of a darker dripping watercolor scene and in “Rainbow” as simple swaths of color on white paper coalescing at the center.

Some of these pieces connect to her childhood both in atmosphere and in depicting artifacts of significance. Arranging them in a range of styles and scenes the series reads like pages in a children’s book where the viewer must infer the missing text. This narrative capacity and the intentionally nondescript backdrops encourage viewers to fill in the story with their own memories and to reminisce on a beloved but bygone time.

Keefe Ortiz was a dancer for 15 years before becoming a visual artist and sees parallels between the mediums.

“I loved the movement and gesture really reminds me of dance ” she says. “The essential line of the object is really important in this style of work and it carries through from the drawing to the final product. It’s an incredibly honest form.”

This sense of movement honesty and grace is visible across her body of work — from completely abstracted mood scenes to dainty watercolors of roses. A particular imperative is finding honesty and beauty in her surroundings. This means that local charm appears often in her recent work.

Pieces like “Azalea ” an intimate 6×9-inch watercolor depiction of the local flower in an arresting purple sitting atop a dreamy sky-blue background reveal some of the sources of meaning and inspiration she has found in her relatively new home.

Her art is ultimately about sharing beauty and hope with others.

“I want the work to be pleasing and beautiful and soothing ” she says. “I want to contribute beauty and balance and respect for the process. I want to say something about the world that I live in and the beauty that I appreciate; to give the world something worth looking at or thinking about.”