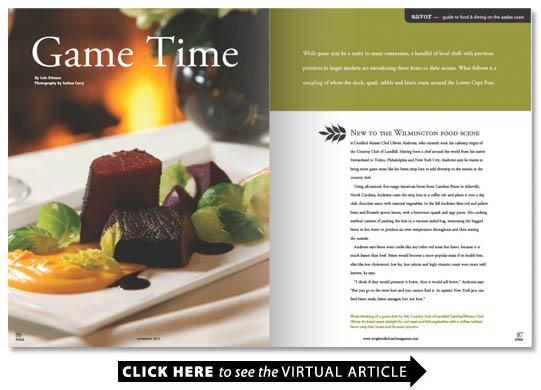 While game may be a rarity in many restaurants a handful of local chefs with previous positions in larger markets are introducing those items to their menus. What follows is a sampling of where the duck quail rabbit and bison roam around the Lower Cape Fear.

New to the Wilmington food scene is Certified Master Chef Olivier Andreini who recently took the culinary reigns of the Country Club of Landfall. Having been a chef around the world from his native Switzerland to Tokyo Philadelphia and New York City Andreini says he wants to bring more game meat like his bison strip loin to add diversity to the menus at the country club.

Using all-natural free-range American bison from Carolina Bison in Asheville North Carolina Andreini coats the strip loin in a coffee rub and plates it over a dry chili chocolate sauce with seasonal vegetables. In the fall Andreini likes red and yellow beets and Brussels sprout leaves with a butternut squash and sage puree. His cooking method consists of packing the loin in a vacuum sealed bag immersing the bagged bison in hot water to produce an even temperature throughout and then searing the outside.

Andreini says bison meat cooks like any other red meat but faster because it is much leaner than beef. Bison would become a more popular meat if its health benefits like low cholesterol low fat low calorie and high vitamin count were more well known he says.
I think if they would promote it better then it would sell better Andreini says. But you go to the store here and you cannot find it. In upstate New York you can find bison steak bison sausages but not here.

Also difficult to find on the shelves of most super markets Brasserie Du Soleil Chef Tripp Engle has introduced all-natural quail from Manchester Farms in South Carolina. The small and sweet quail provides a healthier poultry option than chicken he says.

The meat has a sweetness to it and overall it is a darker meat than chicken Engle says. It is more of a pinkish red color. It is very lean; there is little fat on it whereas a chicken has a lot of fat on it. When you cook it in the skin being very lean and thin it will get really crispy.

Engles preferred dry-heat cooking method for quail is either roasted or grilled but he says brining would be a good idea regardless of the technique.

It takes very well to brining beforehand to maintain juiciness it is easy to dry quail out because it is so small he says. With roasting it is nice to stuff it and filling the cavity of the bird with the stuffing makes it all big and round and it is really pretty on the plate. When grilled it tends to be a little flat but still delicious.

Engle says the size also makes it a good option for dinner parties or a hearty appetizer because it only takes 12-15 minutes to roast.

Having cooked in restaurants like Le Bernadin in New York City Engle says there is a drastic difference in how small game meats are perceived there versus in Wilmington.

If we were in New York City I would be selling a lot of rabbit quail venison guinea hen veal all kinds of things he says. Here it is a little different you have people that appreciate it and really like it and will order it but it is not a large percentage. It is just a lot more common to eat these kinds of things in other environments. For example in France you are going to see a lot of rabbit and quail on the table.

Like quail rabbit is a very healthy and sustainable meat to eat. However Engle has found that diners at the Brasserie are much more apprehensive about trying it.

I just love rabbit; it is very delicious and underrated Engle says. You can do so many things with it but people are a lot more scared to order rabbit than quail.

Chef Michael Greczy has been trying to alter the perception of rabbit at Cobblestone Cafe his new downtown Wilmington eatery. There diners can find options like roast rabbit sandwiches and pulled rabbit salads. For Greczy eating rabbit just makes sense and he added it to his menu when he found a local supplier of New Zealand white rabbit meat — Carolina Petes Rabbitry in Claremont North Carolina.

I know rabbit is one of the healthiest meats you can eat Greczy says. Also they reproduce quickly and dont take up a lot of space so they are much more sustainable to mass-produce rabbit than beef or other animals.

Spending time on his sisters farm helped open his eyes to the benefits of eating rabbit Greczy says.

My sister has a farm down in Florida and I lived with her a while to help her get it set up and one of the things we looked into was raising rabbits he says. So for a while I have been really interested in rabbits in general just in working with her and when I came here I wanted to try to implement rabbit into the menu.

Greczy says rabbit mostly tastes like chicken but its leaner. For those willing to try he says samples are available.

Some people come in and are happy to see it because they have had rabbit before and you dont see it everywhere and then there are the people that come in and say Ew you have rabbit But once we explain the reasons why we have rabbit they are willing to try and even sample some.

Unlike rabbit duck is a game meat variety that most diners are not afraid to try and it has become a year-round staple at local restaurants like the Brasserie Du Soleil where Chef Engle uses a moulard duck variety from the Hudson Valley. Moulard is a cross between Peking and Muscovy ducks and Engle says it is a popular choice for his patrons any time of the year.

Duck has a very loyal following; there are certain people who love duck and they are not going to stray away from it Long says. Since people have been doing a lot more with the farm raising of duck — the gamey-ness that used to turn people off of eating duck is not as prevalent as it used to be and it is much milder so I think that helps.

At The Basics Long cooks white Peking duck from Maple Leaf Farms in Canada. Its served as a duck breast entree like her cider and bourbon marinated seared duck breast with chili and pomegranate glaze and also in various seasonal stews like duck and Andouille sausage gumbo. During the fall and winter months this hearty meal offers warmth savory flavors and a little kick of spice.

The Basics duck and Andouille sausage gumbo introduces a Southern staple to a wet-heat cooking method by classically French-trained Chef Chris Tucker. Prepared with traditional mirepoix — chopped carrots celery and onions — and served over a bed of jasmine rice the ducks tenderness is a focal point of the dish.

We wanted a moist cooking method so we got a big pot of duck stock put everything in for about an hour covered; and when it came out basically the skin and bones were all falling off Tucker says.

Along with its Brunswick stew Tucker says the duck and Andouille gumbo is typically one of The Basics most ordered dishes when there is a chill in the air.

Directions: In a small bowl combine all the ingredients. Rub 1 tablespoon coffee mixture on each steak. In a skillet heat 1 tablespoon of vegetable oil over medium heat. Cook steaks for about 3 minutes per side or until desired doneness (137 to 139 degrees F). Allow steaks to rest 5 minutes before serving.

Directions: Sweat shallots in vegetable oil. Deglaze with red wine and reduce by half. Add stock and dried chili. Simmer until reduced by half. Place chocolate in a mixing bowl strain stock and slowly whisk into chocolate until desired consistency is achieved. Keep warm. Whisk in the butter and adjust seasoning with salt as needed.


Directions: Soften the vegetables in butter over low heat. Add cherries and thyme. Allow mixture to cool and mix into cornbread and egg. Fill the chest cavities with stuffing.

Preheat oven to 350 degrees F. Season quail with salt and pepper and tie legs together with cooking twine. Sear the quail in a cast iron skillet until brown on all sides using a minimal amount of oil. Place quail in roasting pan and roast in oven for around 12 minutes or until thermometer reads 115 degrees F in the center of the bird. Remove the string and let birds rest for 5-10 minutes. Serve with port wine sauce.

Preheat oven to 350 degrees F. Add about 1/2 inch of water to a roasting pan with 2-inch sides and then cover with plastic wrap. Add aluminum foil over the plastic. (The plastic wrap helps retain moisture and the foil keeps the plastic wrap from melting and holds the plastic wrap in place.) Season the whole rabbit with seasoned salt such as Morton Season-All or Lowrys Seasoned Salt and place in roasting pan. Place pan in preheated oven and bake it until the rabbit reaches an internal temperature of 160 degrees F (approximately 1 hour depending on the size of the rabbit). Remove the rabbit from the oven and pull the meat by hand.

Directions: Combine all ingredients and bring to a boil until the salt is dissolved. Cool before using. Combine quail and brine in sealed container and ensure entire quail is coated. Brine quail six hours prior to cooking.