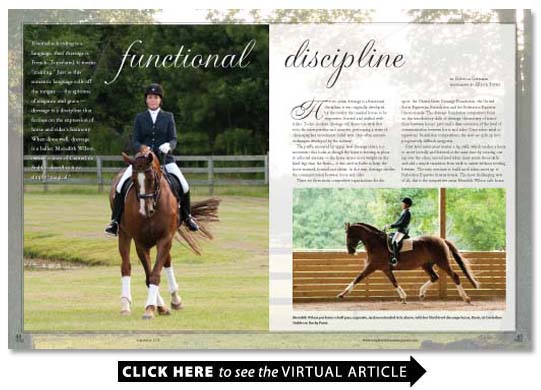 If horseback riding is a language then dressage is French. Translated it means training. Just as this romantic language rolls off the tongue the epitome of elegance and grace dressage is a discipline that focuses on the expression of horse and riders harmony. When done well dressage is a ballet. Meredith Wilson owner/trainer of Centerline Stables describes it as simply magical.

At its core dressage is a functional discipline; it was originally developed by the cavalry that needed horses to be responsive focused and unified with riders. Today modern dressage still shares ties with that root. As riders practice and compete performing a series of choreographed movements called tests they often execute techniques developed by the military.

The piaffe mastered by upper level dressage riders is a movement that looks as though the horse is trotting in place. A collected exercise the horse carries more weight on the hind legs than the front it was used in battle to keep the horse warmed focused and elastic. In this way dressage clarifies the communication between horse and rider.

There are three main competitive organizations for the sport: the United States Dressage Foundation the United States Equestrian Foundation and the Federation Equestre Internationale. The dressage foundation competitors focus on the introductory skills of dressage: the mastery of transitions between horses gaits and a demonstration of the level of communication between horse and rider. Once riders excel to equestrian foundation competitions the tests are split up into progressively difficult categories.

First level riders must master a leg yield which teaches a horse to move laterally and forward at the same time by crossing one leg over the other; second level riders must retain those skills and add a simple transition from walk to canter without trotting between. The tests continue to build until riders move up to Federation Equestre Internationale. The most challenging tests of all this is the competitive arena Meredith Wilson calls home.

Together with her 16.3-hand 11-year-old Hanoverian mare Gigi Wilson competes at the Prix St. George level the first in a four-part series of federation levels. Its an accomplishment some riders work their entire lives to achieve just three steps below Olympic caliber competition. Riders at this level must master the pirouette and flying changes. With a pirouette a horse must twirl in a tight inner circle with its hind feet almost in place as its front feet trace a larger outer circle. Flying changes occur when a horse switches leads the leg the horse throws forward first at a canter without transitioning to a trot. At this level flying changes are required every three to four strides creating a movement that resembles skipping or dancing.

To be successful riders practice rigorously. Wilson is no different. She rides daily and attends clinics both close to home and overseas to learn from dressage professionals like Susie Weidman and German FEI Judge and Grand Prix competitor Harald Cornelissen. She does this because to her dressage is a journey.

At her farm that remains her focus. Although Gigi is recovering from a suspensory injury she continues the practice of partnership with her other mare Rosie a big-hearted but even bigger statured 17.3-hand third level dressage horse.

It takes time Wilson says. Wilson is a natural competitor who loves to show and recently earned her silver medal at Prix St. George. She says I fell in love with dressage because its about building a relationship with your horse finding that partner who has the heart and will to listen.