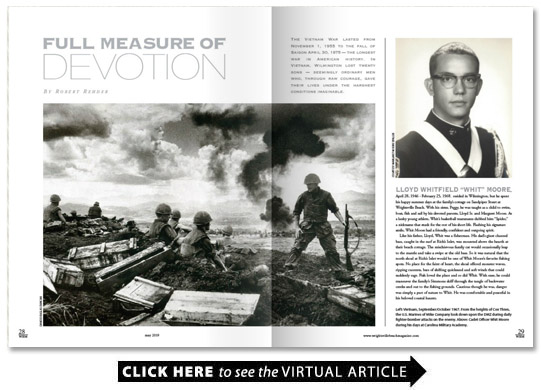 Lloyd Whitfield “Whit” Moore April 28 1946 – February 25 1968 resided in Wilmington but he spent his happy summer days at the family’s cottage on Sandpiper Street at Wrightsville Beach. With his sister Peggy he was taught as a child to swim boat fish and sail by his devoted parents Lloyd Sr. and Margaret Moore. As a lanky young athlete Whit’s basketball teammates dubbed him “Spider ” a nickname that stuck for the rest of his short life. Flashing his signature smile Whit Moore had a friendly confident and outgoing spirit.

Like his father Lloyd Whit was a fisherman. His dad’s giant channel bass caught in the surf at Rich’s Inlet was mounted above the hearth at their beach cottage. The mischievous family cat would occasionally leap to the mantle and take a swipe at the old bass. So it was natural that the north shoal at Rich’s Inlet would be one of Whit Moore’s favorite fishing spots. No place for the faint of heart the shoal offered monster waves ripping currents bars of shifting quicksand and soft winds that could suddenly rage. Fish loved the place and so did Whit. With ease he could maneuver the family’s Simmons skiff through the tangle of backwater creeks and out to the fishing grounds. Cautious though he was danger was simply a part of nature to Whit. He was comfortable and peaceful in his beloved coastal haunts.

Supported by a close circle of friends and family and with inspiration from his mentors at Wilmington’s St. Andrews-Covenant Presbyterian Church Whit cruised through high school at Carolina Military Academy and entered Montreat College in North Carolina’s Blue Ridge Mountains.

How he came to be on a battlefield in Vietnam might best be answered by his love of country. Above all he was a patriot. His father a respected Wilmington banker and civic leader served as a Navy officer in World War Two and Whit’s tenure at military school only strengthened his affinity for duty. Whatever the reason when the Vietnam War was at its height in 1968 he left college to serve his country and volunteered for the rigorous Navy Hospital Corpsman School.

Navy corpsmen also known as combat medics are trained as emergency medical technicians and take their skills to combat zones. Often risking their own lives they are the first responders to injured Marines in battle. More than just caregivers battlefield medics act as one-person triage units performing many of the same trauma tasks as emergency room doctors only under extraordinarily perilous conditions. After graduation from corpsman school Moore completed a tour of duty in Spain before receiving orders to join the 3rd Marine Division in Vietnam.

On January 11 1968 he joined the 3rd Marines at the Khe Sanh Combat Base in Quang Tri Province — one of the deadliest places in the country and during the worst of times for American forces — the Tet Offensive. The offensive was a coordinated series of North Vietnamese attacks on South Vietnamese cities and outposts that took place from January 30 1968 to March 28 1968. Khe Sanh was a major target. The main U.S. forces defending Khe Sanh were two regiments of U.S. Marines pitted against two divisions of the North Vietnamese Army.

Moore immediately settled into his medical duties at the besieged base — duties that included daily patrols outside the Khe Sanh perimeter into enemy-held territory. In the early morning hours of February 25 Moore was one of 41 men in patrol squads who took intense enemy fire. An excerpt from the battle report states: “When 2nd Squad of B-l became pinned down HN MOORE fearlessly moved through the heavy barrage to provide aid to the seriously wounded. He continued despite heavy mortars saving the lives of three Marines. As he was trying to reach a fourth wounded Marine an incoming mortar took his life.”

Of the 41 men on that mission in that one day at Khe Sanh 31 perished. For his actions in Khe Sanh Moore was posthumously awarded the Bronze Star with Combat V to denote heroism — the fourth-highest military decoration for valor.

There are 690 Navy Hospital Corpsmen on the Vietnam Veterans Memorial Wall in Washington D.C. Lloyd Whitfield Moore appears on Panel 41E Line 25. He was 21 and had been in Vietnam 42 days. Whit Moore and his brother corpsmen saved countless lives on the battlefields of Vietnam. To the grim and harrowing corridors of war through extraordinary courage and total faith in one another they gave the gift of life.