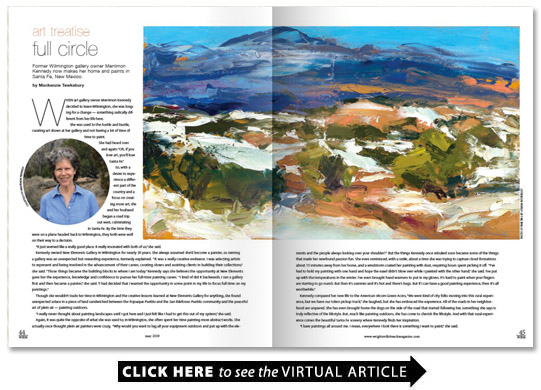 When art gallery owner Merrimon Kennedy decided to leave Wilmington she was longing for a change — something radically different from her life here.

She was used to the hustle and bustle curating art shows at her gallery and not having a lot of time of time to paint.

She had heard over and again: “Oh if you love art you’ll love Santa Fe.”

So with a desire to experience a different part of the country and a focus on creating more art she and her husband began a road trip out west culminating in Santa Fe. By the time they were on a plane headed back to Wilmington they both were well on their way to a decision.

“It just seemed like a really good place. It really resonated with both of us ” she said.

Kennedy owned New Elements Gallery in Wilmington for nearly 30 years. She always assumed she’d become a painter so owning a gallery was an unexpected but rewarding experience Kennedy explained. “It was a really creative endeavor. I was selecting artists to represent and being involved in the advancement of their career curating shows and assisting clients in building their collections ” she said. “Those things became the building blocks to where I am today.” Kennedy says she believes the opportunity at New Elements gave her the experience knowledge and confidence to pursue her full-time painting career. “I kind of did it backwards. I ran a gallery first and then became a painter ” she said. “I had decided that I wanted the opportunity in some point in my life to focus full time on my paintings.”

Though she wouldn’t trade her time in Wilmington and the creative lessons learned at New Elements Gallery for anything she found unexpected solace in a piece of land sandwiched between the Pojoaque Pueblo and the San Ildefonso Pueblo community and the peaceful art of plein air — painting outdoors.

“I really never thought about painting landscapes until I got here and I just felt like I had to get this out of my system ” she said.

Again it was quite the opposite of what she was used to; in Wilmington she often spent her time painting more abstract works. She actually once thought plein air painters were crazy “Why would you want to lug all your equipment outdoors and put up with the elements and the people always looking over your shoulder?” But the things Kennedy once rebuked soon became some of the things that made her newfound passion fun. She even reminisced with a smile about a time she was trying to capture cloud formations about 15 minutes away from her home and a windstorm coated her painting with dust requiring hours spent picking it off. “I’ve had to hold my painting with one hand and hope the easel didn’t blow over while I painted with the other hand ” she said. I’ve put up with the temperatures in the winter. I’ve even brought hand warmers to put in my gloves. It’s hard to paint when your fingers are starting to go numb. But then it’s summer and it’s hot and there’s bugs. But if I can have a good painting experience then it’s all worthwhile.”

Kennedy compared her new life to the American sitcom Green Acres “We were kind of city folks moving into this rural experience but we have our token pickup truck ” she laughed but she has embraced the experience. All of the roads in her neighborhood are unpaved. She has even brought home the dogs on the side of the road that started following her something she says is truly reflective of the lifestyle. But much like painting outdoors she has come to cherish the lifestyle. And with that rural experience comes the beautiful Santa Fe scenery where Kennedy finds her inspiration.

“I have paintings all around me. I mean everywhere I look there is something I want to paint ” she said.

Her paintings now channel her conceptual origins as they have been often described as “abstract landscapes.” She doesn’t strive for realism but rather capturing the artistic essence of the subject itself. She normally paints with oil on panel and chooses to paint with optical color or what the eye presently sees instead of hues found locally to help herself find that perfect balance between observation and interpretation. She often uses hues of blues greens reds and browns to try to capture the mountains lakes rivers skies and trees of Santa Fe.

“Being able to see what you are painting is such a different experience ” she said. “The depth-of-field is really important. You see colors so differently and so much more accurately. You don’t have to second-guess anything when you’re right there in the moment. You even find yourself growing into what you’re painting.”

Kennedy said painting outdoors has really helped her find her painting groove and she has to force herself to paint in her studio. She’s come almost full circle since her days of running a gallery in Wilmington and writing off plein-air painters but to Kennedy she still has a long and exciting road ahead of her.

“This is where I can really let go and be a lot looser ” she said. “I think this is going to be a really important year for me as far as where I am going compared to where I started when I got here ” she said. “Because I’m in my 50s and not my 20s every day is so important and I feel like I’ve got to accomplish everything I possibly can.”

Kennedy might have moved nearly 2 000 miles away but her experiences painting in New Mexico and owning New Elements Gallery have both taught her that it doesn’t matter where you live; art is universal.

“You can live anywhere and find something you relate to ” she said. “Art has a worldwide audience. It’s not restricted to one place. You can have a little background in art or a lot of education. It’s just something that will resonate with your soul. That’s why people create art. It’s part of your quality of life. It’s part of the joy of every day.”