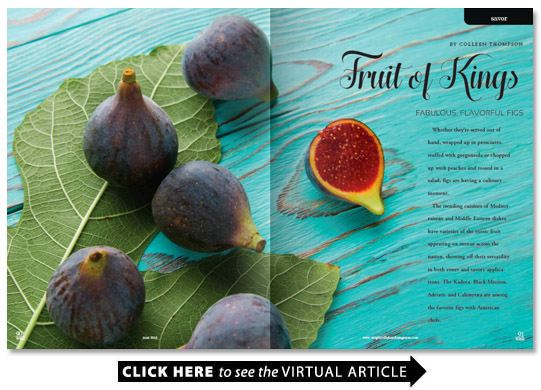 Whether they’re served out of hand wrapped up in prosciutto stuffed with gorgonzola or chopped up with peaches and tossed in a salad figs are having a culinary moment.

The trending cuisines of Mediterranean and Middle Eastern dishes have varieties of the exotic fruit appearing on menus across the nation showing off their versatility in both sweet and savory applications. The Kadota Black Mission Adriatic and Calimyrna are among the favorite figs with American chefs.

A Short History of an Ancient Tree

Legend has it that fig trees were planted in the hanging gardens of Babylon by King Nebuchadnezzar II. Greeks and Romans believed this delicate fruit had been sent from heaven. They’ve been associated with Christmas since the time of Charles Dickens. Believed by some to be the actual “forbidden fruit” eaten in the Garden of Eden since Adam and Eve clothed themselves in fig leaves after partaking they are steeped in a complex and symbolic history — a kind of Holy Grail of fruits.

Figs are thought to be native to Asia Minor and western Asia eventually spreading throughout the Middle East and the Mediterranean. The fig tree appears throughout the Old and New Testament of the Bible and Sumerian stone tablets dating back to 2500 B.C. have recorded their culinary use. The remains of fig trees have been found in excavations of Neolithic sites dating from 5000 B.C.

They were introduced into the New World by Spanish and Portuguese missionaries mainly to the West Indies in 1520 and to Peru in 1528. From the West Indies figs quickly spread across the southeastern United States.

The first figs were reportedly flourishing at Parris Island South Carolina by 1577. Two years later they were in St. Augustine Florida and by 1629 they had been introduced to Virginia via Bermuda.

They were exported from the West Indies to Spanish missions in Mexico and spread to California where the Franciscan missionaries planted them in their gardens in San Diego in the middle of the 18th century — hence the name “mission” for the dark purple California figs we know and love today.

Thomas Jefferson had fig cuttings sent to Monticello from Paris at the end of the 18th century. Jefferson’s passion for figs helped promote varieties in Virginia and the Carolinas. He deemed the White Marseille fig as being superior for its small seeds jammy taste and unique creamy white flesh. In many areas of the South fig trees grew so abundantly that they became an accepted part of the countryside landscape.

The fig tree is indeed an extraordinary creature with a complex and fascinating biology. What we think of as the fruit is really an inside-out blossom — a cluster of ingrowing flowers known botanically as a syconium. The inside of the fig is lined with hundreds of male and female flowers. The males carry pollen while the females bear seeds.

There are more than 750 named varieties of fig trees but all fall into four types. The common fig the one found growing in most gardens requires no pollination because all of the flowers are female. The caprifig only produces male flowers and is pollinated by wasps. The smyrna requires cross-pollination with a caprifig. The San Pedro bears an independent first crop like the common fig but the second crop is dependent on pollination.

These peculiar differences were the source of much frustration for early cultivators who were often confounded by barren plants.

A single tree will have two distinct harvest periods during a season. Around the middle of June comes the “breba” crop the fruit that emerges from the old wood on the tree. This season is very short and serves as a preview of the larger longer harvest from the new branches of the tree.

Another unique aspect of figs is that unlike other commercial fruit trees that have a relatively short lifecycle figs can be prolific for 50 years or more.

They also play a vital role in the ecosystem.

In his book “Gods Wasps & Stranglers ” rainforest ecologist Mike Shanahan says more than 1 200 species eat figs including one-tenth of the world’s birds along with nearly all known fruit bats and dozens of species of primates dispersing seeds as they digest.

“Ecologists therefore call figs a keystone resource ” Shanahan writes. “Like the keystone of a bridge if figs disappeared everything else could come crashing down.”

Flavor of the Year

Anyone holding a fresh fig is immediately faced with a choice: skin or no skin? There is no right or wrong answer. It comes down to personal taste. Fig skins are edible but contain an enzyme called ficin that can cause a tingling sensation.

“The proper way to eat a fig in society ” he wrote “is to split it in four holding it by the stump and open it so that it is a glittering rosy moist honied heavy-petalled flower. Then you throw away the skin which is just like a four-sepalled calyx after you have taken off the blossom with your lips. But the vulgar way is just to put your mouth to the crack and take out the flesh in one bite.”

However the juicy fleshy-textured fruit is eaten figs are rewarding with their musky sweetness and hints of vanilla and honey. The Swiss flavor company Firmenich has named them the flavor of the year and describes them as artisanal and complex. With an array of colors in their skins from bright green to bronze to violet and their delicate strawberry middles it’s little wonder they have replaced the avocado as the most photographed and trending Instagrammable food.

In Southern kitchens preserved figs hold sway over all else. Perhaps because Southeastern figs are so perishable and the season so brief whole Brown Turkey and Celeste varieties are often dipped in a syrup with thin slices of lemon and ginger and drizzled over freshly baked buttermilk biscuits.

In the Outer Banks Ocracoke Island is dotted with 14 varieties that thrive despite the heat salt and sand. The island has become quite famous for its moist spice fig cake that was first made in the 1950s or 1960s by the late Margaret Garrish. Her children say she didn’t have dates for a date cake recipe and her fig version spread to other home cooks via church suppers and community potlucks. The cake is now served at a number of restaurants on the island and sold by the slice at a fish house.

There are many varieties of figs available but most are very difficult to transport so the variety of figs in grocery stores or at farmers markets will depend on the distance from the source. The three most common varieties are the Black Mission Brown Turkey and Kadota.

This teardrop-shaped fig with purple-hued brown skin and amber pinkish-colored pulp is an old favorite. Its origins are thought to go back to the early 1700s when it was first introduced to England. The pulp is not as sweet as other varieties. It produces two crops a year one in late May and another in late September. It has a broad-spreading tree shape and the leaves have five lobes instead of the three-lobed leaves of many other fig trees.

This Turkish fig is often found dried but it is delicious fresh if you can find it. It is a comparatively large varietal with golden skin and pinkish flesh with a distinctive nutty flavor.

Perhaps the most esteemed fig variety. It is believed to have originated from a tree in the Balearic Islands off the coast of Spain. This vigorous growing fig has purple-black skin and light strawberry pulp. It has a heavy first crop (breba) in early summer and another crop in late fall.

A Southern favorite this small pear-shaped fig has purple-brown skin and very light pink pulp. They are deliciously sweet and are therefore also called honey or sugar figs.

A common green fig grown in California it is believed to be thousands of years old. Pliny the Elder is said to have commended this variety known in Italy as the Dotatto. The skin is greenish yellow and very smooth with amber pulp. These figs are often canned or dried.

Cream together butter sugar and eggs until pale yellow and fluffy. Add sifted dry ingredients to the egg mixture alternating with the buttermilk. Add vanilla and fold in the figs and nuts. Pour into greased bundt or tube pan and bake at 350 degrees for 45 minutes to 1 hour. Dust with confectioner’s sugar and roasted walnuts.