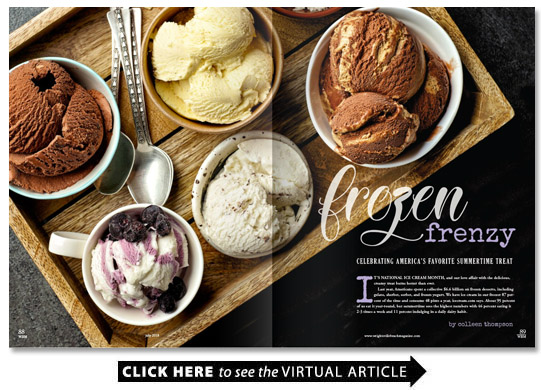 It’s National Ice Cream Month and our love affair with the delicious creamy treat burns hotter than ever.

Last year Americans spent a collective $6.6 billion on frozen desserts including gelato sherbet sorbet and frozen yogurt. We have ice cream in our freezer 87 percent of the time and consume 48 pints a year icecream.com says. About 95 percent of us eat it year-round but summertime sees the highest numbers with 46 percent eating it 2-3 times a week and 11 percent indulging in a daily dairy habit.

The history of ice cream is swirled with colorful stories and there are more myths and legends surrounding its origin than there are flavors of Ben & Jerry’s.

The Chinese are generally acknowledged as the inventors of the first frozen dairy treat possibly as early as 200 B.C. Some say Marco Polo brought it back to Italy in the 13th century. From there it spread throughout Europe possibly when Catherine de’ Medici married King Henry II of France in 1533.

Historians might not agree on the timeline or the people involved but it is known that ice made with sweetened milk was being eaten in Naples by 1664 and in England by 1671 when the dish appeared on the menu at a banquet for the Feast of St. George at Windsor Castle.

The first documented account of ice cream being served in America was in 1744 when Maryland Governor Thomas Bladen put it on his dessert table. It was a warm day in May and having something frozen to eat astonished the guests. William Black of Virginia wrote of it in a letter mentioning “a Dessert no less curious; Among the Rarities of which it was Compos’d was some fine Ice Cream which with the Strawberries and Milk eat most Deliciously.”

A 1751 cookbook called “The Art of Cookery Made Plain and Easy: Which Far Exceeds Any Thing of the Kind Yet Published ” by Hannah Glasse included a recipe for ice cream. Martha Washington owned a copy of Glasse’s cookbook and likely put the recipe to use. George Washington purchased a “cream machine for ice” in 1784. Records show that while president Washington bought an ice cream spoon tin molds and “ice pots.”

We have Thomas Jefferson to thank for bringing America’s favorite flavor to these shores. He developed a passion for ice cream while serving as a diplomat in Paris in the 1780s. He brought back a recipe for a French-style vanilla made with egg yolks along with 40 vanilla bean pods. The recipe calls for “2 bottles of good cream 6 yolks of eggs 1/2 lb. sugar” to be flavored with vanilla and frozen in a sarbottiere (ice freezer). When he was president Jefferson had an icehouse built for the President’s House.

First Lady Dolley Madison served it often at White House social occasions extending the popularity of ice cream — at least among the wealthy. At the time ice cream remained an elite treat due to the expense of machines and scarcity of ice.

As technology evolved including the development of ice harvesting and the invention of the insulated icehouse and ingredients like sugar became more affordable ice cream became available to the less affluent. But it took two other developments to make ice cream mainstream.

In 1843 Nancy M. Johnson invented an efficient hand-cranked ice cream freezer “a new and useful Improvement in the Art of Producing Artificial Ices.” An inner cylinder containing the ice cream mix was inserted into an outer wooden pail with crushed ice and rock salt and a handle inserted through the top of the lid was turned to freeze the mix.

Johnson’s machine made it possible to make ice cream at home but it was Jacob Fussell who truly took the treat to the masses when he opened the first large-scale commercial plant in Pennsylvania in 1851. Rather than let his excesses of milk and cream go sour he contracted a local miller Daniel Henry to build an icehouse and factory that turned them into ice cream. Mass production cut the cost significantly. Advances such as industrial refrigeration motorized vehicles and electric power made it easier to produce transport and store.

More and more people could enjoy ice cream around the turn of the century but flavors were limited — chocolate vanilla strawberry maybe coffee — until 1929 when Edy’s Grand combined chocolate ice cream with walnuts and miniature marshmallows a concoction named Rocky Road.

About the same time Howard Johnson took over a soda fountain in Wollaston Massachusetts which sold just vanilla chocolate and strawberry. Johnson wanted to offer more flavors but only after he improved the quality of the ice cream. He discovered that doubling the butterfat content and using only natural ingredients produced a superior product.

Johnson added food to the menu and became the first to franchise his restaurant. By 1954 there were 400 of the ubiquitous orange-roofed eateries in 32 states. Ice cream — now available in 28 flavors — remained the foundation.

While it was possible to find quality ice cream in many flavors at ice cream parlors the news wasn’t as good at the local supermarket. “I scream you scream we all scream for ice cream.” But not all ice cream is created equal even if it’s a simple combination of milk sugar and eggs. These once-noble treats that were hand-cranked and made from fresh all-natural and seasonal ingredients lost their way like all mass-produced products and became sticky overly sweet and artificially flavored goop.

Quality ice cream began to find its way to the local grocery store when gourmet brands like H�agen-Dazs and Ben & Jerry’s moved from the scoop shop to the supermarket freezer section.

H�agen-Dazs was created by Reuben Mattus in 1958. His premium product used all-natural ingredients and 12 percent butterfat instead of the standard 10. He gave his fancy ice cream a fancy made-up name that sounded Danish.

Ben and Jerry two guys from Vermont ended up making ice cream in 1978 because bagel manufacturing equipment cost too much. They became the darlings of ice cream connoisseurs everywhere by rejecting common practices like the addition of milk powder vegetable oil and artificial flavorings. They also rejected high overrun a practice in which air is whipped into the ice cream to make it soft so that less can be sold as more.

Today’s artisan ice cream makers are opting for hormone-free milk and fresh seasonal local ingredients. Rather than using cheaper ingredients to stabilize and thicken ice cream they use the more expensive choices of heavy cream and egg yolks.

On any given day Boombalatti’s Homemade Ice Cream in Wilmington serves up a selection of creative handcrafted flavors – Cinnamon Caramel Oatmeal Cookie Vietnamese Coffee or how about Key Lime and Coconut?

“Coming up with seasonal flavors is one of our favorite things to do because it lets us continue to be creative ” says owner Wes Bechtel. “One of my favorites is blueberry ice cream during the hot days of summer using super ripe berries from Burgaw.”

Latella Gelato in Carolina Beach is owned by husband-and-wife team Erik Dietrich and Jeanie Shaffer who after attending training at Carpigiani Gelato University in Winston-Salem decided to pay homage to their Italian roots and open a handmade gelato shop.

“Gelato is something that really appealed to us ” Shaffer says. “For Erik it’s a tie to his Italian grandfather Mario Latella. It’s a chance to indulge my love of sweets and interesting flavor pairings.”

Making their gelato from scratch in small batches the couple changes their flavors on a daily basis.

“To date we have over 100 flavors and sometimes we feel like crazy mad scientists in our kitchen ” Jeanie says.

By federal law ice cream must contain at least 10 percent milkfat less than 1.4 percent egg yolk solids and weigh a minimum of 4.5 pounds to the gallon. Ice cream must have at least 14 percent milkfat to be labeled premium. All ice cream has air whipped pumped or churned into it a practice called overrun. Ice creams with a high overrun (30 percent or more) are less expensive and of lesser quality.

Similar to ice cream with a minimum of 10 percent milkfat and at least 1.4 percent egg yolk.

The Italian-style treat uses more milk and less cream than ice cream and generally doesn’t use egg yolks. It is churned at a slower speed so has less air and is denser. Gelato is typically stored and served at a slightly warmer temperature so it’s creamier.

Sherbet (not sherbert) is basically a fruit-flavored dairy dessert. It can only have 1-2 percent milkfat and 2-5 percent total milk solids. Sherbet has 25-50 percent less overrun than ice cream.

Frozen yogurt consists of low-fat or non-fat yogurt with ingredients for sweetening and flavoring.

Sorbet is similar to sherbet but has no dairy. The two main ingredients are fruit and sugar.

Soft serve is less dense than ice cream as a result of air being introduced during freezing. It is made in and dispensed from a freezer in which it is aerated and continuously churned.

The Evolution of Ice Cream in America

1777 The first advertisement for ice cream appears in the “New York Gazette” on May 12 when confectioner Philip Lenzi announces its availability “almost every day.”

1790 Records kept by a New York merchant show that George Washington spent approximately $200 for ice cream during the summer.

1874 Robert M. Green creates the ice cream soda when he runs out of sweet cream while selling soda fountain drinks at an exhibition in Philadelphia and substitutes vanilla ice cream.

1892 Chester Platt places an ad in the “Ithaca Daily Journal” for the “Cherry Sunday” served at Platt & Colt’s soda fountain. It was born on a Sunday when Rev. John M. Scott came in for his usual dish of vanilla ice cream after services. Platt poured cherry syrup over the top and added a candied cherry. Another story claims the ice cream sundae was invented in Evanston Illinois. Carbonated drinks were prohibited on the Sabbath so an enterprising soda jerk substituted syrup for soda.

1904 The waffle cone is created at the World’s Fair in St. Louis when an ice cream vendor runs out of glass dishes. Ernest A. Hamwi a nearby Syrian concessionaire selling a crisp waffle-like pastry rolled one of his wafer-like waffles into the shape of a cornucopia. The fresh-made cone cooled in a few seconds and the vendor put a scoop of ice cream in it.

1904 or 1907 Latrobe Pennsylvania and Wilmington Ohio both claim credit for the banana split. Latrobe says David Strickler created it at the Tassell Pharmacy in 1904. Wilmington hosts an annual Banana Split Festival in honor of E.R. Hazard who the town says made culinary history in 1907 by flanking three scoops of ice cream with a banana cut lengthwise in hopes of attracting more students from nearby Wilmington College.

1919 Archie C. Kohr adds eggs to an ice cream recipe to create a light and fluffy product that “tasted just like a custard.”

1920 Harry Burt of Youngstown Ohio develops frozen ice cream on a stick and calls it the Good Humor bar. Burt sells the treat out of trucks driven by men in white uniforms. The drivers ring bells to get people’s attention and the ice cream truck is born.

1940 The rationing of ingredients like sugar and cream during World War II leads to the creation of milk ice or ice milk a low-fat alternative to the ice creams of the day which were traditionally made with 14 percent fat.