From Wax to Bronze: Lost & Found 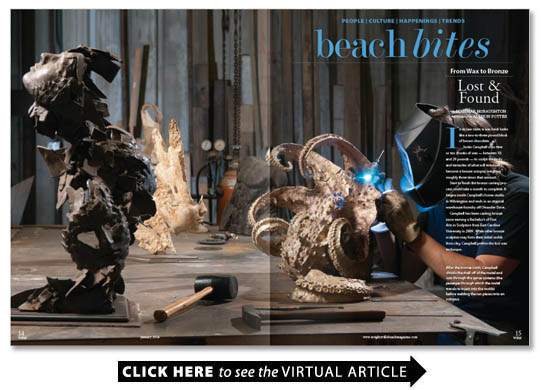 In its raw state a wax brick looks like a two-to-three pound block of brown chocolate.

Justin Campbell uses nine or ten chunks of wax — between 18 and 20 pounds — to sculpt the body and tentacles of what will eventually become a bronze octopus weighing roughly three times that amount.

Start to finish the bronze casting process could take a month to complete. It begins inside Campbells home studio in Wilmington and ends in an atypical warehouse foundry off Oleander Drive.

Campbell has been casting bronze since earning a Bachelors of Fine Arts in Sculpture from East Carolina University in 2009. While other bronze sculptors may form their initial molds from clay Campbell prefers the lost wax technique.

The lost wax method dates back 5 000 years to its first known use in India. Other ancient cultures have perfected the process in parts of Asia Egypt Greece and in Central and South America. Beeswax molds are replaced with precious and semi-precious metals to create jewelry ornamental and ceremonial objects. The process was also adopted by European artists for large-scale sculptures.

I almost always work directly in wax Campbell says. I dont like the repetitive mold process because I like my pieces to have a semblance of one-of-a-kind all the time.

For Campbells octopus six solid wax molds are used to create six hollow ceramic shells made largely from silica compounds in liquid and powder forms along with other elements and a suspension agent that prevents the substances from falling apart he explains.

An entire tank is filled with liquid slurry. Other tubs are filled with different aggregates of silica — from fine to medium to coarse.

Campbell dips one of his wax molds into the slurry.

Its like the consistency of a thick soup he says. The first coat takes about a half day to dry. Then you add another coat.

While the second coat is still wet the mold is rolled in solid silica sand.

The process is repeated with the other five pieces. Drilling holes in the hardened mold to allow the wax to escape each mold is low melted in a 1 300-degree Fahrenheit kiln.

The wax melts out quickly instantaneously Campbell says. Because the casting process was produced with liquid slurry after the drilled holes are filled the ceramic shell mold captures the finest minutist details of the original sculpted wax pieces.

Each ceramic mold is vented to allow off gases to escape during the pour when each cavity is filled with the liquid metal.

With the majority of the work completed before the pour Campbell invites friends and family to witness the dramatic highlight of the process.

While his guests mill about the side yard of his foundry the chatter is overpowered by the sound of the hissing propane tank. Kernstine dressed in a suede hide apron a visored welders helmet and elbow-length canvas gloves repeatedly checks the temperature. They are waiting for nightfall before the fireworks begin.

Their silhouettes are framed in the backlight flooding the warehouse interior. Together they remove a slender iron cylinder from the furnace. This is the crucible carried with oversized iron tongs to three of the six molds waiting to be filled. Kernstine steadies the crucible for Campbell who has earned the honor of pouring.

In its liquid form the bronze is dark red to orange with flashes of gold. When it fills the molds its white hot.

Each of the molds is allowed to cool for 30 minutes before it is hosed down with water. The vents are cut off and melted into the remaining bronze to be used in casting the second set of molds.

After all of the molds are filled three more stages remain: breaking the ceramic shell off the bronze cleaning each cast piece and welding the parts together.

The octopus is the finale in Campbells sea life series.

I love the form but I dont want to be niched Campbell says. My next series is going to be based off the human form.