From Warrior to Healer 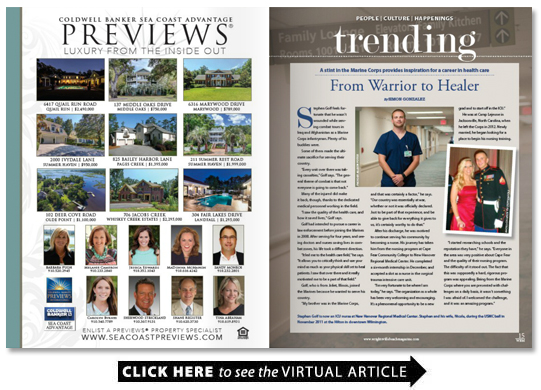 Stephen Golf feels fortunate that he wasn’t wounded while serving combat tours in Iraq and Afghanistan as a Marine Corps infantryman. Plenty of his buddies were.

Some of them made the ultimate sacrifice for serving their country.

“Every unit over there was taking casualties ” Golf says. “The general theme of combat is that not everyone is going to come back.”

Many of the injured did make it back though thanks to the dedicated medical personnel working in the field.

“I saw the quality of the health care and how it saved lives ” Golf says.

Golf had intended to pursue a career in law enforcement before joining the Marines in 2008. After serving for four years and seeing doctors and nurses saving lives in combat zones his life took a different direction.

“It led me to the health care field ” he says. “It allows you to critically think and use your mind as much as your physical skill set to heal patients. I saw that over there and it really motivated me to be a part of that field.”

Golf who is from Joliet Illinois joined the Marines because he wanted to serve his country.

“My brother was in the Marine Corps and that was certainly a factor ” he says. “Our country was essentially at war whether or not it was officially declared. Just to be part of that experience and be able to give back for everything it gives to us it’s certainly worthy to do that.”

After his discharge he was motived to continue serving his community by becoming a nurse. His journey has taken him from the nursing program at Cape Fear Community College to New Hanover Regional Medical Center. He completed a six-month internship in December and accepted a slot as a nurse in the surgical trauma intensive care unit.

“I’m very fortunate to be where I am today ” he says. “The organization as a whole has been very welcoming and encouraging. It’s a phenomenal opportunity to be a new grad and to start off in the ICU.”

He was at Camp Lejeune in Jacksonville North Carolina when he left the Corps in 2012. Newly married he began looking for a place to begin his nursing training.

“I started researching schools and the reputation they have ” he says. “Everyone in the area was very positive about Cape Fear and the quality of their nursing program. The difficulty of it stood out. The fact that this was supposedly a hard rigorous program was appealing. Being from the Marine Corps where you are presented with challenges on a daily basis it wasn’t something I was afraid of. I welcomed the challenge and it was an amazing program.”

He started his six-month internship after graduating last May. He rotated through the surgical trauma ICU the medical ICU the coronary care unit and the cardiovascular intensive care unit.

“We spent time in each unit building our skill sets and learning the trade of each of the different ICUs in partnership with the doctors and the other nurses ” he says. “In these six months you get to learn all these different skill sets and bring it to whatever unit you end up in. I’ll be in the surgical trauma unit here so I’m very excited about that and very grateful.”

While working as a nurse Golf is also continuing his education. He is in a program called RIBN or Regionally Increasing Baccalaureate Nurses a partnership between Cape Fear Community College and the University of North Carolina Wilmington. Students are dual enrolled at the two schools. After receiving their associate degree in nursing from CFCC they continue to take online classes from UNCW to complete the bachelor of science degree.

“It’s been incredible to watch him ” says Erin Luce the advisor for the program at UNCW and a nurse in the surgical trauma ICU at New Hanover Regional Medical Center. “He is humble and he has a drive. He knows exactly what he wants to do and what it takes to get there. He’s such a well-rounded respectful person. He’ll meet the needs of whatever patient he takes care of.”

The RIBN program emphasizes community-based nursing. Someday Golf might combine that with his former military career.

“I have a passion for veterans health care ” he says. “Recently I completed a paper on an analysis of veterans health care that advocates for homeless veterans on a federal level and the state and local level as well. Nursing allows you to choose areas that you’re passionate about because it is so diverse. It’s great that you can participate in all these different areas.”