From Plow to Carriage 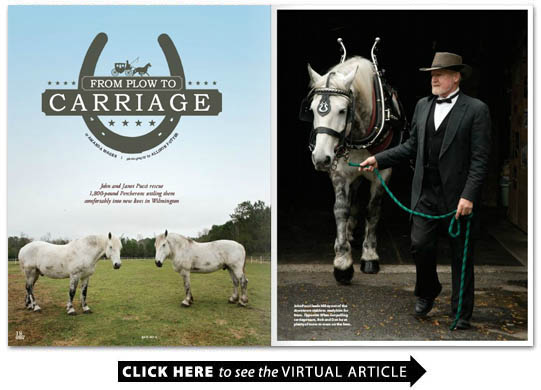 Its 8 a.m. and the overhead barn door rises allowing light to pour over the perked ears of a stocky horse in the third stall. His coat was once much darker. His head is now almost completely white. This is Mikey an eight-year-old Percheron that was rescued by John and Janet Pucci owners of Springbrook Farms Inc.

Today the Amish still use Percheron draft horses for farming but the Puccis and other members of Carriage Operators of North America use the gentle-natured horses for pulling carriages and trolleys in areas like historic downtown Wilmington.

The Puccis brought Springbrook Farms to Wilmington 25 years ago. Since then they have rescued 16 horses that may have otherwise gone to meat processors. Horses like Mikey are raised from birth by Amish farmers to become plow horses. If they do not perform at the same speed as the other horses by the time they turn three Amish farmers sell them at auctions.

Pucci says “Its not their fault ” that the Amish dont want to send them to the meat auctions to be processed as food but they have no choice.

Some Amish farmers first contact Pucci who purchases horses like Mikey. Rescued five years ago Mikey has settled into his comfortable life as a carriage tour horse. He hardly pays attention when Michael todays carriage man loads a breakfast of fresh hay and a bucket of water right in front of his nose. Mikeys stall is one of seven in Springbrooks downtown stable. The horses reside here while they are working and spend the rest of their time at the main farm outside of Wilmington. Each stall has a red nameplate soft bedding a continuous feed of hay and water a ceiling fan music and a toy hanging by a string. Mikeys stall has an old jug swaying; Neds stall has a large plastic apple. All of the horses receive a pampering unheard of on a working farm.

After Mikey eats Michael leads him to the wash down a large enclosed stall just outside of the barn doors. Mikey is then led back to the barn for further grooming.

Mikey is tacked for the day including a studded brow band attached to blinders that keep him focused during the tours. On special occasions Mikey and other horses are festively dressed.

When ready Michael harnesses Mikey to the carriage and begins driving north on Second Street. The carriage-loading station is located at the foot of Market Street next to the Cape Fear River.

Mikeys hooves clop clop along the 18th-century bricks at a steady pace; the carriage wheels roll smoothly swaying a little from the uneven cobblestones. Downtown feels different from underneath the awning of the carriage; its full of rich stories and memories that pull guests into a time of revolution and petticoats. Michael waves at passers-by describing the history of homes businesses and residents to his passengers.

Every horse that the Puccis rescue has gone through extensive training to be able to navigate through the congested city streets. Until they are three years old the Amish voice trains them for fieldwork. At Springbrook the horses learn to disregard noises made by people and instead follow the direction given through the reins. This ensures the carriage horse will follow only the carriage mans instructions.

“Our business is one of the few that perfectly matches these slower draft horses ” Pucci says at their preferred pace while still getting the exercise they need. For Mikey and the other 1 800-pound horses pulling a full carriage is equal to a person casually riding a bicycle.

The horses work approximately one week per month and are rotated to guarantee that each horse is healthy and does not become overweight.

“We like that we can keep them active because that is the key to longevity ” Pucci explains. “The average farming horse wears out around 12 to 15 years because of the strain on their knee joints; the average carriage horse can work for almost twice as long before being retired.”

In the summertime horses at the downtown barn are rotated throughout the day. Today Mikey works the whole day; he pulls some sightseers but not enough to tire him out. He has a fresh bucket of water at the carriage-loading station that he drinks from during breaks. When the day ends he returns to the downtown stable and is unharnessed at the end of his shift.

Back at the main farm the other horses eat and play all day long. Bobby and Radar two retired horses with completely white coats stand next to each other. Ned sneaks a mouthful of food from Radars trough. Two riding horses stand next to Ned. Rex a newer horse grazes alone in the middle of the pasture. Prince slobbers a drink of water and shakes his head. Don and Pete stand taller than the rest their manes covering their eyes looking a little more carefree than the others. The remaining horses hang out inside of the barn free to roam in and out as they please.

“We dont need this many horses ” Pucci says. “But if the business can help us feed them take care of them and have good vet care then why not save them?”

The rest of the farm includes a large pond with ducks and geese two rescued dogs and a wooden farmhouse that was designed by the Puccis.

“This farm life and everything is going away ” Pucci says. “Its disappearing and were happy to keep the tradition going not only to save the horses but to save this whole lifestyle.”