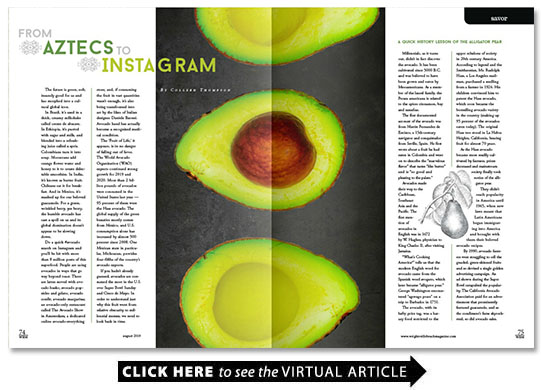 The future is green soft insanely good for us and has morphed into a cultural global icon.

In Brazil it’s used in a thick creamy milkshake called creme de abacate. In Ethiopia it’s pur�ed with sugar and milk and blended into a refreshing juice called a spris. Colombians turn it into soup. Moroccans add orange flower water and honey to it to create delectable smoothies. In India it’s known as butter fruit. Chileans eat it for breakfast. And in Mexico it’s mashed up for our beloved guacamole. For a green wrinkled berry yes berry the humble avocado has cast a spell on us and its global domination doesn’t appear to be slowing down.

Do a quick #avocado search on Instagram and you’ll be hit with more than 8 million posts of this superfood. People are using avocados in ways that go way beyond toast. There are lattes served with avocado husks; avocado popsicles and gelato; avocado confit; avocado margaritas; an avocado-only restaurant called The Avocado Show in Amsterdam; a dedicated online avocado-everything store; and if consuming the fruit in vast quantities wasn’t enough it’s also being transformed into art by the likes of Italian designer Daniele Barresi. Avocado hand has actually become a recognized medical condition.

The ‘Fruit of Life ‘ it appears is in no danger of falling out of favor. The World Avocado Organization (WAO) expects continued strong growth for 2019 and 2020. More than 2 billion pounds of avocados were consumed in the United States last year — 95 percent of them were the Hass avocado. The global supply of the green beauties mostly comes from Mexico and U.S. consumption alone has increased by almost 500 percent since 2008. One Mexican state in particular Michoacan provides four-fifths of the country’s avocado exports.

If you hadn’t already guessed avocados are consumed the most in the U.S. over Super Bowl Sunday and Cinco de Mayo. In order to understand just why this fruit went from relative obscurity to millennial memes we need to look back in time.

A Quick History Lesson of the Alligator Pear

Millennials as it turns out didn’t in fact discover the avocado. It has been cultivated since 5000 B.C. and was believed to have been grown and eaten by Mesoamericans. As a member of the laurel family the Persea americana is related to the spices cinnamon bay and sassafras.

The first documented account of the avocado was from Martin Fernandez de Encisco a 15th-century navigator and conquistador from Seville Spain. He first wrote about a fruit he had eaten in Colombia and went on to describe the “marvelous flavor” that tastes “like butter” and is “so good and pleasing to the palate.”

Avocados made their way to the Caribbean Southeast Asia and the Pacific. The first mention of avocados in English was in 1672 by W. Hughes physician to King Charles II after visiting Jamaica.

“What’s Cooking America?” tells us that the modern English word for avocado came from the Spanish word avogato which later became “alligator pear.” George Washington encountered “agovago pears” on a trip to Barbados in 1751.

The avocado with its hefty price tag was a luxury food restricted to the upper echelons of society in 20th century America. According to legend and the Smithsonian Mr. Rudolph Hass a Los Angeles mailman purchased a seedling from a farmer in 1926. His children convinced him to patent the Hass avocado which soon became the bestselling avocado variety in the country (making up 95 percent of the avocados eaten today). The original Hass tree stood in La Habra Heights California bearing fruit for almost 70 years.

They didn’t reach popularity in America until 1965 when new laws meant that Latin Americans began immigrating into America and brought with them their beloved avocado recipes.

By 1990 avocado farmers were struggling to sell the gnarled green-skinned fruits and so devised a single golden advertising campaign. An ad shown during the Super Bowl catapulted the popularity. The California Avocado Association paid for an advertisement that prominently featured guacamole and as the condiment’s fame skyrocketed so did avocado sales.

More Than A Dip

Out of the billions of avocados consumed in the U.S. each year 1.4 billion pounds of them are eaten in the form of guacamole. Considered a dip by some the roots of the word actually mean sauce. It dates back to 16th-century Aztecs and comes from a Nahuatl word ahuacat meaning avocado and mulli meaning mixture or sauce.

The Aztecs mixed the creamy pulp with herbs vegetables and spices in a molcajete (mortar and pestle) making guacamoleone of the oldest (if nottheoldest) traditional American foodstill made today. Cilantro and lime weren’t added until after the arrival of the Spanish who brought them to the New World.

Journalist Richard Harding Davis reportedly introduced avocados to New York high society; restaurateur Charles Delmonico and his French chef Charles Ranhofer put them on the menu. Avocado preparations became fashionably exotic after a recipe on how to prepare them was published in the New York Times in 1912.

Many people particularly Mexicans are very particular about how guacamole is prepared. In the definitive guide to Mexican food “Tacopedia: The Taco Encyclopedia ” writers D�borah Holtz and Juan Carlos Mena tell us “it’s a dish impossible to fully encompass or describe.”

Chef and author Diana Kennedy (“The Art of Mexican Cooking”) and Hugo Ortega (“Street Food of Mexico”) believe that the addition of lime juice actually disrupts the flavor of avocado and suggest leaving it out completely.

In Mexico guacamole is usually eaten at the beginning of a meal accompanied by a stack of freshly prepared hot chicharron carnitas or tortilla chips. These days it’s more often than not made with onions lime juice cilantro perhaps a bit of tomato or chili.

Guacamole Bowl — is the traditional Mexican mortar and pestle used for making guacamole and salsa. They are still handmade in Mexico from lava (basalt) stone. The chilies onion and salt are first placed in the molcajete and ground to a paste then avocados are chopped in mixed roughly allowing small chunks of avocado to remain and then be served in the molcajete.

While there are many variations traditional Mexican guacamole has only six ingredients.:

These are the stars in all guacamole and no amount of salt or lime will mask the flavor of a sketchy avocado. The fruit should be firm to the touch with just a little give to indicate ripeness. The Hass is the avocado of choice.

The most common chilies in Mexico are serrano and jalapeno and therefore the go-to choice for guacamole. They are both hot so chop finely before adding to your guacamole.

The white onion which has a pure clean hot flavor is most commonly used in Mexican cooking. You don’t want onion flavor to overpower the guacamole so chop it very fine.

Select ripe but still firm red tomatoes: Italian or plum styles have the most flavor.

This spice also called coriander is widely used in Mexican cooking and has a strong pungent flavor.

Flaked sea salt like Maldon adds both flavor and crunch and is worth the splurge.

1 smalljalapeno finely chopped (seeded if you want it milder)

Scoop out the flesh of the avocados and mash slightly with a fork.

In a mortar and pestle or traditional molcajete crush the onion jalapeno and cilantro.

Add the avocado and lime juice to the molcajete and mix it with the rest. Make sure not to over-mix and blend too smooth.

Add the tomato salt pepper and combine gently with a spoon.

Taste and adjust seasoning if necessary.