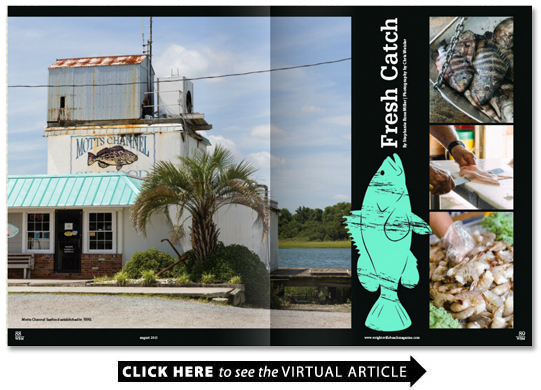 A beat-up Ranger pickup pulls in at Motts Channel Seafood on Wrightsville Beach. The local fishermen haul a heavy cooler full of sheepshead and flounder. With a Motts employee they tote the cooler to the cutting room where a briny smell comes off the tables reminiscent of seaweed-studded beaches.

The men dicker over the weight of the catch. A hundred and two pounds says the fisherman. Moments later he throws the fish into a basin that resembles a metal swing attached with three heavy-duty chains to the scale. The fish weighs in at 101 pounds.

August will bring plentiful grouper flounder snapper and shrimp says Tom Franz who has been with Motts for most of its 25 years. He ticks off the fish that are local each season.

Mom and Pop fish stores like Motts owned by Alison and Gene Long hark back to the days when customers patronized the fish store for fillets a farm stand for fresh fruit and vegetables and the butcher for a shoulder of beef. The milk truck replaced empty bottles with full and the egg lady put the eggs at the back door.

Eagle Island Fruit Stand and Seafood on US Highway 421 spitting distance from the Battleship is of the same breed. Owners Carolyn and Norris Flowers brought in seafood back in 1969. Oysters were their main trade then and the business is still famous for the salty delicacy.

The store started by Norris’s parents has that country feel. It has expanded to include refrigerators loaded with fresh butter beans and peas Amish country butter lard and pork sausage. Wooden shelves groan with moonshine jelly habanero pineapple jam and gumbo. Baskets spill over with fresh peaches plums and corn. Now there’s alligator in and among the usual suspects in the fish market.

Norris likes his fish pan-fried especially Virginia mullet dipped in white corn meal and cooked to perfection. So there are plenty of mullets amid a host of flounder and other sleek whole fish buried in ice. While the customer goes next door to pay the cutters hand-trained by a 20-year veteran cutter make quick work of the whole fish neatly wrapping the fillets. A large freezer holds a supply of crab scallops and shrimp.

Mom and Pop Revonda and Ronnie Williams of Ronnie’s Crab Shack have been doing things a little differently over the last ten years. Their immaculate store on South Third Street in the same block as the Red Barn Studio Theater is so clean that you’d never guess there was a fish to be had within those four walls. Johnnie Gore store manager and his staff scrub walls and baseboards to make sure no fishy smell lingers.

“We pride ourselves on our cleanliness ” Gore says.

Live crabs are their mainstay with Ronnie doing all of the crabbing as well as bringing in some of the fish.

“I’ve never seen people eat crab like they do in Wilmington ” Gore says as he digs his hand into a basin and picks up a shiny wriggling blue crab. “It’s like they’re addicted to crab. They can’t get enough.”

Bright-eyed flounder along with Virginia mullet spots and more lie in mounds of ice looking more like a display case in a jewelry store with the ice like sparkling gemstones than a table at a fishmonger’s.

On Thursdays Fridays and Saturdays from 11 am to 6 pm at Ronnie’s mobile kitchen customers line up for steaming shrimp or flounder burgers along with clam strip plates fried crabs and lots more.

One of Ronnie’s cutters William Harris Jr. has been in the business since age 16 and has trained many of the local cutters for more than 40 years. One of his protegees Venice Smith of Howard’s Seafood at Fifth and Castle streets calls him the Captain a sign of respect for the trade and Harris’s place in it.

Also a family-owned business Seaview Crab Company opened a second Wilmington area store at Marstellar and 16th streets just over a year ago. The pristine fish cases have “Got to be NC Agriculture” signs dotted everywhere throughout the mounds of ice next to all the fish caught here in North Carolina.

Seaview likes to go live along with its fresh-caught fish. In addition to its signature crabs the company brings in lobsters from Maine every week and a large variety of oysters throughout the year says Zach Sweeney the Marstellar location store manager. More unusual fare is the whole live octopus whelk and sea snails.

Mom and Pop fish stores Sweeney says preserve the old fashioned fisherman-to-consumer relationship while adhering to modern FDA regulations and dealing with infrastructure issues due to coastline diminshment and development.

“I am afraid that in my lifetime there will only be three fish left ” Sweeney says “flounder because there is a lot and salmon and catfish because they’re farm raised.”