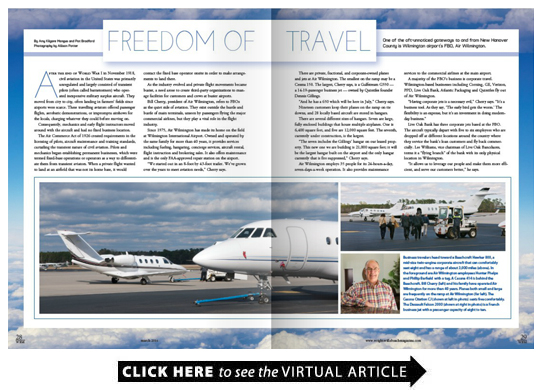 After the end of World War I in November 1918 civil aviation in the United States was primarily unregulated and largely consisted of transient pilots (often called barnstormers) who operated inexpensive military surplus aircraft. They moved from city to city often landing in farmers’ fields since airports were scarce. These travelling aviators offered passenger flights aerobatic demonstrations or impromptu airshows for the locals charging whatever they could before moving on.

Consequently mechanics and early flight instructors moved around with the aircraft and had no fixed business location.

The Air Commerce Act of 1926 created requirements in the licensing of pilots aircraft maintenance and training standards curtailing the transient nature of civil aviation. Pilots and mechanics began establishing permanent businesses which were termed fixed-base operations or operators as a way to differentiate them from transient aviators. When a private flight wanted to land at an airfield that was not its home base it would contact the fixed base operator onsite in order to make arrangements to land there.

As the industry evolved and private flight movements became busier a need arose to create third-party organizations to manage facilities for customers and crews at busier airports.

Bill Cherry president of Air Wilmington refers to FBOs as the quiet side of aviation. They exist outside the hustle and bustle of main terminals unseen by passengers flying the major commercial airlines but they play a vital role in the flight industry.

Since 1975 Air Wilmington has made its home on the field at Wilmington International Airport. Owned and operated by the same family for more than 40 years it provides services including fueling hangaring concierge services aircraft rental flight instruction and brokering sales. It also offers maintenance and is the only FAA-approved repair station on the airport.

“We started out in an 8-foot by 43-foot trailer. We’ve grown over the years to meet aviation needs ” Cherry says.

There are private fractional and corporate-owned planes and jets at Air Wilmington. The smallest on the ramp may be a Cessna 150. The largest Cherry says is a Gulfstream G550 — a 14-19-passenger business jet — owned by Quintiles founder Dennis Gillings.

Nineteen customers keep their planes on the ramp on tie downs and 28 locally based aircraft are stored in hangars.

There are several different sizes of hangars. Seven are large fully enclosed buildings that house multiple airplanes. One is 6 400 square feet and five are 12 000 square feet. The seventh currently under construction is the largest.

“The seven includes the Gillings’ hangar on our leased property. This new one we are building is 21 000 square feet; it will be the largest hangar built on the airport and the only hangar currently that is fire suppressed ” Cherry says.

Air Wilmington employs 35 people for its 24-hours-a-day seven-days-a-week operation. It also provides maintenance services to the commercial airlines at the main airport.

“Having corporate jets is a necessary evil ” Cherry says. “It’s a business tool. As they say ‘The early bird gets the worm.’ The flexibility is an expense but it’s an investment in doing modern-day business.”

Live Oak Bank has three corporate jets based at the FBO. The aircraft typically depart with five to six employees who are dropped off at different locations around the country where they service the bank’s loan customers and fly back commercially. Lee Williams vice chairman of Live Oak Bancshares terms it a “flying branch” of the bank with its only physical location in Wilmington.

“It allows us to leverage our people and make them more efficient and serve our customers better ” he says.

On a typical day there are also 10-15 transients that come in; sometimes these are planes carrying a high-profile movie star athlete or celebrity.

“They are either here to do business or get fuel ” Cherry says. “You never know who is going to walk through the door.”

For the visitors Air Wilmington offers a private pilots’ lounge with a snooze room and shower WIFI and computers and snacks.

“We thrive on Southern hospitality ” Cherry says. “I want everyone to be courteous.”

Some of the transients arrive from out of the country to clear customs at the Wilmington International Terminal staffed by Customs and Border Protection officers.

“We are getting customs traffic from longer distances ” Cherry says. “We had some in here not too long ago from Mexico; we will get some out of Europe that actually run out of fuel and this makes a good stop for that.”

Federal law establishes Wilmington as the only location on the East Coast where planes returning from areas south of 30 degrees north latitude may land to clear customs north of Jacksonville Florida without an overflight exemption a specific authorization from the landing airport. Wilmington is unique because it is the only location north of the demarcation line that doesn’t require the authorization to land.

“In 2006-2007 at customs we were doing 2 700 airplanes a year. They were high- profile people. Wilmington was their choice because we could get them in and out of customs quickly ” Cherry says. “The average turnaround at customs for a large jet is about 30 minutes. At another location you could wait an hour before anyone would even look at you. Now with the new overflight exemptions that number is down to about 1 500 clearing customs.”

The amount of private aircraft either stationed locally or arriving from elsewhere makes it critical to airport operations to have ramp space — the tarmac or concrete that serves as a parking area for planes without hangars. Air Wilmington has approximately 10 acres of ramp space with an additional 5-6 acres being resurfaced at the north end of the airport.

“The airport is expanding its existing terminal. They are going to change some ramp space to get more availability of it to park more airliners ” Cherry says. “There are a couple of acres there at customs we use just to park the airplanes that come in there. The corporate jets will have a 100-foot wingspan and you need more than that to adequately taxi them in and taxi them out. Most of our aircraft are in the neighborhood of 50- or 60-foot wingspan. But we do get a lot of the 95-foot wingspans. Some of these military airplanes exceed well over 100 feet. It eats up a lot of room quickly. Being able to have room to maneuver these airplanes in and out is a key element to having an efficient operation for both the customer and the operation that is handling it.”

A number of other airplanes use the ramp on a regular basis including a fair amount of military traffic.

“We are a popular destination for the military ” Cherry says. “There is a lot of traffic that goes through our airspace that never lands here out of Goldsboro [Seymour Johnson Air Force Base] Pope Army Airfield Marine Corps Air Station Cherry Point Marine Corps Air Station New River. But we have a lot of military traffic that does land here. The Harriers out at Cherry Point and New River use Wilmington as a training base generally on the weekends. And we also have C-130s that do the same thing.”

If there is anything going on offshore here the Coast Guard planes will use Wilmington as a base.

“We get turboprop or light jets out of Washington going down to Gitmo [Guantanamo Bay Naval Base in Cuba] with intelligence teams base inspectors that go to check on the facilities that stop here for fuel going down or for clearing customs and fuel coming back ” Cherry says.

Military aircraft out of Andrews Air Force Base that are part of the presidential fleet — any plane that transports the president is designated as Air Force One — also operate in and over Wilmington.

He says the larger airplanes rarely stop “because of the logistics of shutting one of these things down and cranking it back up.”

The FAA is in and out of the airport flight-checking airplanes and the instrument landing systems that Wilmington has and also checking the navigation aids in and around the area.

Vince Tryer 56 a 1984 NC State University graduate and a general contractor got his private pilot’s license at Air Wilmington in the late 1980s and continued with additional flight ratings. It proved to be very valuable.

“Years ago I joined a small company as a partner. We were doing everything — estimating project managing selling — trying to do everything for the company. Even though we had cell phones we spent a lot of time on the road. It became unproductive. So we bought an airplane ” he says. “I had a job in Hilton Head. It was a two-day thing just to go down there and back. What I found was I could literally fly to the job check on things turn around and leave and be back in the office by noon. I could be home for family time instead of living on the road.”

The company’s work more than doubled that first year after purchasing the plane.

“It wasn’t solely because of the airplane but flying afforded us the ability to have more time to solve problems while doing other things ” he says.

“We probably flew 700 hours the first year ” Tryer says. “We were licensed contractors in 31 states. As our jobs became further away we moved up to a single-engine turboprop airplane. This allowed us to fly safer faster and at higher altitudes.”

The airplane proved to be unreliable though and Air Wilmington became an invaluable expert for the company.

“It happened to be an airplane we had a lot of trouble with ” Tryer says. “There were a lot of issues with maintenance and operational costs. Bill [Cherry] has been doing this forever and coached me on what type of plane to get.”

His expertise guided the company to pick the right airplane and they moved up to a King Air.

“It’s been around for a long time and is an awesome airplane from an operational and maintenance standpoint. It’s a workhorse ” Tryer explains.

Tryer is now vice president and division manager for Thomas Construction Group and doesn’t travel as much but still flies recreationally. He owns and operates an RV-4 two-seat homebuilt airplane.

“I fly on the Bandit Flight Team based out of Sanford ” he says. “We fly the national anthem flyover formation for a variety of events — all the NC State home football games some NASCAR events Wounded Warriors. Some days we have three missions to fly. It’s pretty inspirational for me.”

Tryer is one of only a handful of recreational pilots who participate in formation flying.

Tryer says Wilmington is an awesome venue for recreational flying.

“You have a fantastic airport and a fantastic FBO with Air Wilmington — a bunch of professionals to aid you with knowledge and experience ” he says. “It’s a great environment. They do a fantastic job. They continue to make it better for pilots.”

“An airplane is no different than your car; it breaks down ” he says. “Bill’s maintenance staff are some of the finest around. It’s comforting. In an airplane you cannot pull over when something is wrong. To have as professional and as talented a group over there is pretty awesome. You’re trusting them with your life. When they say it’s right you know you’re safe to go out. You can’t find a finer group to be around than the Wilmington International and Air Wilmington staff.”