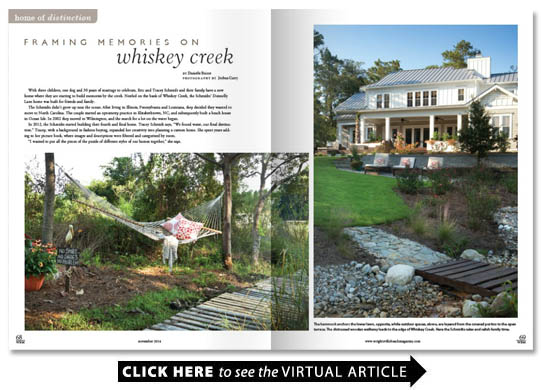 With three children one dog and 30 years of marriage to celebrate Eric and Tracey Schmidt and their family have a new home where they are starting to build memories by the creek. Nestled on the bank of Whiskey Creek the Schmidts  Donnelly Lane home was built for friends and family.

The Schmidts didn t grow up near the ocean. After living in Illinois Pennsylvania and Louisiana they decided they wanted to move to North Carolina. The couple started an optometry practice in Elizabethtown NC and subsequently built a beach house in Ocean Isle. In 2002 they moved to Wilmington and the search for a lot on the water began.

In 2012 the Schmidts started building their fourth and final home. Tracey Schmidt says We found water our final destination. Tracey with a background in fashion buying expanded her creativity into planning a custom home. She spent years adding to her picture book where images and descriptions were filtered and categorized by room.

I wanted to put all the pieces of the puzzle of different styles of our homes together she says.

The inspiration for the home was clear. Tracey sought a mix between East Hampton and California – coastal living with a cottage feel. When they purchased the lot at 4150 Donnelly Lane Tracey imagined all of the living spaces having a creek view.

The Schmidts started working with architectural designer John Croom of Cornerstone Residential Designs. Tracey noted what she didn t like in her previous homes.

The kitchen was never big enough she says.

They worked with Croom to minimize hall space maximize living space and preserve the square footage of all rooms.

When they were ready to start building in 2012 Eric and Tracey took their ideas to Plantation Building Corp.

Plantation allowed the creativity to see things the way I wanted them done Tracey says. Through Plantation she worked very closely with Charlie Davis who built all of the custom trim in the home. Davis says Tracy made it easy by knowing what she wanted.

Charlie understood what I wanted to accomplish. I wanted a wood element in all of the rooms. I wanted the wood to be the design and the art work of the house Tracey says.

The Schmidts came from a house with color. Tracey had an idea for this home to have white walls with minimal decoration.

I wanted everything to be textured in the house. I wanted texture instead of color she says.

The great room which includes the kitchen casual dining area and living room is rich in texture and allows the wood elements to shine. The kitchen is framed in dark reclaimed wood.

The wood was already 200 years old. You wire brush the wood to bring the grain out. When you stain it the grain really stands out Davis says.

In the kitchen function is sublimated by the juxtaposition of materials. With white wood planking adding a cottage feel to the walls open shelves expose the homeowners  vases bowls and platters.

I wanted it to be functional art Tracey says. Everyone puts their platters away they put their plates away. But when you look at it the lines are so pretty. I wanted the shelves to be free-floating so the pieces spoke for themselves. The eye from the family room goes to the kitchen so I wanted that wall to look like art.

An unexpected combination of materials creates a contrast between white walls warm natural textures and industrial accents. Woven shades in the windows mercury glass pendants above a distressed walnut island wrought iron barstools Restoration Hardware accent lighting and concrete countertops all complement each other with their contrasting consistencies.

The wood and the pieces speak for themselves she says.

Floating beneath a board and batten ceiling a casual dining area shares the same simple aesthetic as the living room. The furniture which is upholstered in linen and burlap-like fabrics sits on knobby sisal rugs. These natural textures dissolve into the neutral palette that is warmed by the tones of a reclaimed wood coffee table and the saturated floors.

I didn t want the furniture to distract from the trim work or work against it Tracey says. For years to come I see Eric and me staying here until the kids come home and having a party with entertainment down here. I made the rooms down here big because when you think about your living space you spend all your time in the family room or the kitchen. That s all you need in the house.

Built off of the living room the master suite introduces high Shaker-style wainscoting a driftwood bed and large basket lights that create a cozy atmosphere.
The neutral palette is once again accented with organic and worn textures. Wood-grain clay tile on the master bedroom floor Carrara marble countertops and vertical two-by-four boards were meant to resemble the Hamptons cottage style. Tracey wanted penny gaps between each board.

We actually used a real penny to make the spaces Davis says.

Heading up the stairs is a collage of family photos in diverse frames. Different colors and sizes pop against white walls and the dark wood used on the stair treads and railing.

I wanted a classic cottage look and I definitely wanted a family wall. I had that in my head Tracey says.

At the top of the stairs are sliding glass doors leading to a den that has the best view of Whiskey Creek. The den is a space for the kids to get away but not be closed in. Three bedrooms one for a son in high school and two for the daughters in college fill up the remainder of the upstairs and continue with the white walls dark wood floors and the simple cottage appeal.

Sunday afternoons the family enjoys the water views from the backyard and participates in activities such as paddle boarding kayaking boating or just lounging on the raft.

When it s high tide you can get in and go you don t have to think about it. It s nice because we have privacy Tracey says.

The Schmidt family has been in its Whiskey Creek home for one year. With three happy children and one happy dog Tracey will frame her family s traditions and the memories made by the creek.