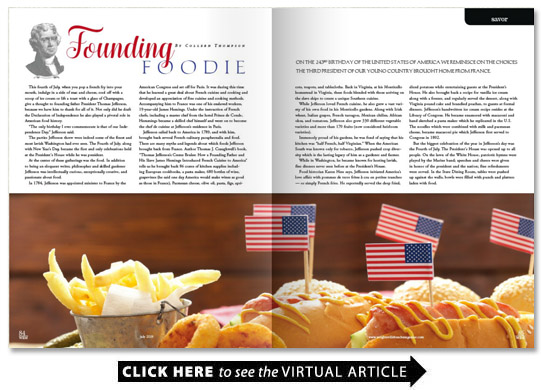 On the 243rd birthday of the United States of America we reminisce on the choices the third president of our young country brought home from France.

This fourth of July when you pop a french fry into your mouth indulge in a side of mac and cheese cool off with a scoop of ice cream or lift a toast with a glass of Champagne give a thought to founding father President Thomas Jefferson because we have him to thank for all of it. Not only did he draft the Declaration of Independence he also played a pivotal role in American food history.

“The only birthday I ever commemorate is that of our Independence Day ” Jefferson said.

The parties Jefferson threw were indeed some of the finest and most lavish Washington had ever seen. The Fourth of July along with New Year’s Day became the first and only celebrations held at the President’s House while he was president.

At the center of these gatherings was the food. In addition to being an eloquent writer philosopher and skilled gardener Jefferson was intellectually curious exceptionally creative and passionate about food.

In 1784 Jefferson was appointed minister to France by the American Congress and set off for Paris. It was during this time that he learned a great deal about French cuisine and cooking and developed an appreciation of fine cuisine and cooking methods. Accompanying him to France was one of his enslaved workers 19-year-old James Hemings. Under the instruction of French chefs including a master chef from the hotel Prince de Conde Hemings became a skilled chef himself and went on to become the chef de cuisine at Jefferson’s residence in Paris.

Jefferson sailed back to America in 1789 and with him brought back several French culinary paraphernalia and food. There are many myths and legends about which foods Jefferson brought back from France. Author Thomas J. Craughwell’s book “Thomas Jefferson’s Creme Brulee: How a Founding Father and His Slave James Hemings Introduced French Cuisine to America” tells us he brought back 86 crates of kitchen supplies including European cookbooks a pasta maker 680 bottles of wine grapevines (he said one day America would make wines as good as those in France) Parmesan cheese olive oil pasta figs apricots teapots and tablecloths. Back in Virginia at his Monticello homestead in Virginia these foods blended with those arriving on the slave ships to create a unique Southern cuisine.

Immensely proud of his gardens he was fond of saying that his kitchen was “half French half Virginian.” When the American South was known only for tobacco Jefferson pushed crop diversity which is the lasting legacy of him as a gardener and farmer.

While in Washington he became known for hosting lavish fine dinners never seen before at the President’s House.

Food historian Karen Hess says Jefferson initiated America’s love affair with pommes de terre frites a cru en petites tranches — or simply French fries. He reportedly served the deep fried sliced potatoes while entertaining guests at the President’s House. He also brought back a recipe for vanilla ice cream along with a freezer and regularly served the dessert along with Virginia pound cake and brandied peaches to guests at formal dinners. Jefferson’s handwritten ice cream recipe resides at the Library of Congress. He became enamored with macaroni and hand sketched a pasta maker which he replicated in the U.S. The noodles which were combined with milk and parmesan cheese became macaroni pie which Jefferson first served to Congress in 1802.

But the biggest celebration of the year in Jefferson’s day was the Fourth of July. The President’s House was opened up to all people. On the lawn of the White House patriotic hymns were played by the Marine band; speeches and cheers were given in honor of the president and the nation; fine refreshments were served. In the State Dining Room tables were pushed up against the walls bowls were filled with punch and platters laden with food.

In a large saucepan over a high heat boil the potatoes in salted water until tender and easily pierced with a fork. Set aside to cool.

In a medium bowl whisk together the mayonnaise buttermilk and Dijon mustard. Add in 1/2 the green onions 1/2 chives 1/2 dill 1/2 parsley lemon zest salt and pepper.

When the potatoes are cooled slice them in half.

In a large bowl combine the cooled potatoes with the buttermilk dressing and hard-boiled eggs and season generously with salt and pepper to taste.

Place in the fridge for 45 minutes to cool. When ready to serve sprinkle with the remaining herbs.

Whisk mayonnaise vinegar honey celery seeds salt and pepper in a large bowl to combine. Add white and red cabbage and carrots red bell pepper and apple to dressing and toss to coat. Cover and chill until ready to serve.

Wash the tomatoes pat them dry slice them into quarters and place them in a medium sized bowl. Sprinkle with salt and black pepper. Slice the mozzarella balls in half dice the avocado and add them to the tomatoes. Finely chop the anchovies and capers together tear up the basil into small pieces and add. Drizzle with good quality olive oil and balsamic vinegar and mix to combine all the ingredients.

Dissolve sugar and water in a small saucepan over medium heat stirring constantly. Remove from heat; stir in lime zest and lime juice. Cover and chill for one hour. Add an ounce or two of sugar syrup per glass. Add blueberries and cherries and top with sparkling water.

In a medium bowl whisk together the boiling water cocoa powder milk and vanilla.

In a separate bowl sift together the flour baking soda and salt.

In the bowl of a stand mixer combine the butter and sugars and beat until light and fluffy. Add the eggs one at a time and beat on medium.

Add the flour and cocoa powder mixtures in batches.

Pour the batter into the prepared pan and bake for 35 to 40 minutes. Let the cake cool in the pan on a rack for 10 minutes then invert the cake onto the rack remove the wax or parchment paper and let it cool completely.

In the bowl of a stand mixer combine the cream cheese butter and vanilla extract and beat until combined. Add the confectioners’ sugar beat until the frosting is smooth. Chill the frosting in the refrigerator for 30 minutes.

Frost the top and sides of the cake.