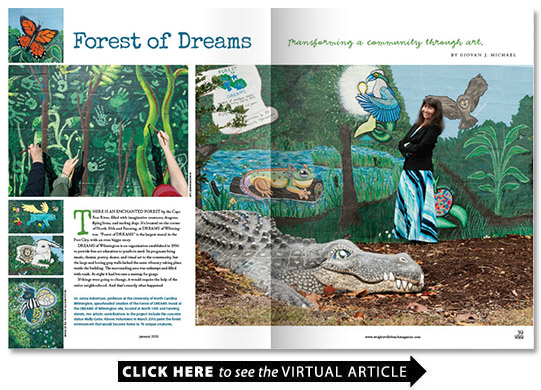 There is an enchanted forest by the Cape Fear River filled with imaginative creatures; dragons flying lions and surfing dogs. It’s located on the corner of North 10th and Fanning at DREAMS of Wilmington. “Forest of DREAMS” is the largest mural in the Port City with an even bigger story.

DREAMS of Wilmington is an organization established in 1996 to provide free art education to youth in need. Its programs bring music theater poetry dance and visual art to the community but the large and boring gray walls lacked the same vibrancy taking place inside the building. The surrounding area was unkempt and filled with trash. At night it had become a meetup for gangs.

If things were going to change it would require the help of the entire neighborhood. And that’s exactly what happened.

In the spring of 2016 Dr. Janna Robertson of the University of North Carolina Wilmington took a sabbatical to spearhead the creation of a mural that would transform the dull wall into a lush forest. To fund it she had the idea of offering a unique creature to anyone who donated $50 to the cause and submitted a design. The mural now includes 76 special creatures each representing a different community group or sponsor. They include the referee/bumblebee of the Police Athletic League a googly-eyed furball from the NAACP and an exotic rainbow bird from the Cameron Art Museum.

Robertson had to wear many hats during the semester-long project. She not only oversaw the artistic direction of the mural but also was present at every Wilmington City Council meeting making sure progress was not delayed. A project of this scale could take over two years to complete but Robertson simply didn’t have that kind of time. Her ability to work through the red tape while also leading more than 600 volunteers was not only impressive but necessary.

And yet Robertson will be the first to say this isn’t her mural.

“I do enough of my own art to satisfy my ego ” she says. “Everybody who worked on this mural thinks of it as their mural. And they’re right. It belongs to everybody who had a part in it.”

Rather than being stressful running such a large project was a labor of love.

“I get more back from the relationships I have with all these people than I have ever given them ” Robertson says. “Every great change in the world started with a small group of people who had relationships with each other. All change comes from relationships and all change is local.”

It’s that collective mindset that gives the piece its unique flair. The handiwork of people from all walks of life is seen in the brushstrokes and handprint-shaped leaves of the forest. The murals’ website says the ages of the volunteers “ranged from 0-to-94 and included school children college students teachers artists neighbors city officials police community nonprofits churches businesses and random people who heard about the mural and wanted to help!”

The mural is jam-packed with rich details large and small. There is Wally Gator the giant concrete statue of an alligator constructed by Robertson out of a dilapidated corner of the wall. There is a huge wooden cutout of a cosmic deer and a poem that goes along with it encouraging children to follow their dreams. Behind that are small fairy doors nailed to a tree and a garden of gnomes hidden throughout the mulch.

But the most touching detail has to be the Dexter James legacy tree.

Dexter was known as the “mayor of the street.” He would often check in on the single older women of the neighborhood making sure they were all right and offering them rides if needed. He was responsible for the legacy tree which has leaves painted with the names of deceased loved ones. And he was very protective of the mural as a whole.

“He would patrol the mural at night or when Janna wasn’t there ” says Gladys Hardy a neighbor and one of the women James would regularly check on. She calls him Chico. “If you came to the mural and Chico didn’t know you he would ask what business you had being there. Then he would call Janna up to see if she sent you. He didn’t want anybody messing with it.”

Hardy makes cakes with a secret recipe she’ll never tell! When Dexter passed away in April 2017 she made a cake for his memorial service. On his birthday August 6 Robertson and Dexter’s family threw a party and unveiled the Dexter James Memorial Path.

Robertson remembers that while they had a loving relationship she and Dexter did have some disagreements. This was exacerbated by the fact that he had lung cancer and had to yell at her from the street when she was painting because he couldn’t breathe in the fumes.One of their biggest arguments came when Robertson had to seal the wall.

“He was furious that I was going to stop people from being able to add the names of their loved ones to the tree ” she says. “I sealed the wall but I promised to make him a pathway. And although he never got to see it for $1 you can add the name of your loved one to the path.”

It’s a beautiful little pathway of rainbow bricks with the phrase “Dreams do come true!” painted at the end. People often come to the legacy tree and path to spend time with their loved ones. They say they much prefer the Forest of DREAMS a place filled with so much life to Oakdale Cemetery across the street.

The whole neighborhood is invested in the mural and they look after it. Every morning the first thing Hardy does as she wakes up is to enjoy the mural from her window and make sure nobody has done anything to it.

The area has undergone a metamorphosis and the community feels much safer. The grass is regularly mowed and mulched by the city and even the condemned house across the street got a makeover. What used to be a boarded-up eyesore is now painted to look like a lovely summer cottage with a steaming blueberry pie in the window.