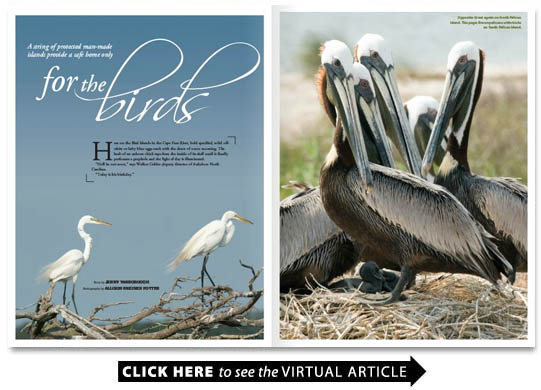 Here on the Bird Islands in the Cape Fear River bold speckled solid off-white or baby blue eggs crack with the dawn of a new morning. The beak of an unborn chick taps from the inside of its shell until it finally perforates a peephole and the light of day is illuminated.

“Today is his birthday.”

Pelican nests tower up to three feet in the air. Herons and egrets build higher in the brush than the others. Terns and gulls scratch out their nests in the sand decorated with broken shells and shattered bone.

“After the birds leave theres not much here ” Golder says. During the winter months the island is populated by lifeless gnarled cedars that when uprooted by the tides wash ashore when they die.

But now as the temperature rises the islands pulse and breathe. April 1 and Aug. 31 is nesting season. Around 14 different species of colonial water birds flock to these islands to mate to nest and to hatch. By late May nearly every square inch of sand and thicket is occupied by nesting brown pelicans; royal gull-billed and sandwich terns; snowy cattle and great egrets; black-crowned night tricolored and little blue herons; white and glossy ibis; laughing gulls and American oystercatchers.

It is here on the river about halfway between downtown Wilmington and the mouth of the Cape Fear where the calm moving water suddenly begins to stir with winged creatures. Skimming the horizon where the water meets the sky they dive beneath the surface and re-emerge with fish hanging from their beaks as they fly back to their nests. Beside the now-cracked egg of the laughing gull sits another chick that awaits its first saline taste of regurgitated fish.

On the islands some birds like the brown pelican build their beds with dried grasses and other locally collected foliage neatly stacked upon the sand.

Brown pelicans were once endangered due to the spraying of DDT pesticide on cornfields. The toxic chemicals bled into the waterways and estuaries into the bellies of fish which were then consumed by water birds such as these. The concentrated pesticide inhibited the ability to lay an egg with a structurally sound shell. And even if those eggs affected by DDT didnt crack when they were laid they were shattered when the mother tried to roost. At one point the species was almost wiped out. But after the use of DDT was banned in 1972 it gradually recovered.

“Thirty years ago ” Golder explained “there was only one colony of pelicans in the state around Ocracoke around 1980.”

Then there were less than 100 brown pelican pairs statewide but a second colony congregated in the Cape Fear River and the numbers have skyrocketed.

“Today theres about 4 000 ” Golder explains. “Pelicans
are a real success story.” So sucessful in fact that about
30 percent of the states brown pelican population nests in the Lower Cape Fear.

Another tale of triumph for conservationists is that of the great egret. The birds image is embroidered on the breast of Golders shirt and hat the symbol of the National Audubon Society.

“Thats where the organization started ” he says.

“Those wispy plumes ” Golder says as he points to the striking white long-legged shore birds “were almost the end of the great egret.”

Hunted for their plumage which was used for garnishing hats worn by women around the turn of the 20th century the great egrets story is much the same as the brown pelicans. It was only through measures taken during the Audubon Societys beginnings in the 1880s and the protesting of the mass slaughter of the elegant birds that the species was saved. Some of Audubons earliest conservation efforts were concentrated close by.

“After the turn of the century ” Golder says “there was only one colony that was known of in the early 1900s and that was at Orton Plantation.”

The colony was guarded by one of the states first hired game wardens.

Today there are no such threatened inhabitants of the Bird Islands but these aviaries are still guarded as if they were. The birds depend on these sanctuaries a place where food is readily available and most predators are too far away to swim. When a predator is spotted birds take flight blanketing the sky like a quilt of winged creatures.

Golder began his career with these birds more than 20 years ago as a graduate student studying under Dr. James Parnell professor emeritus of biology at the University of North Carolina Wilmington and one of the pioneers in the Bird Island studies.

In the mid-60s before Audubon or the U.S. Fish and Wildlife Service or the N.C. Wildlife Resources Commission took note of the common nesting grounds young professor Parnell was just learning his way around Wilmington. He had come to teach at the University of North Carolina Wilmington after receiving his Ph. D. in Biological Sciences at North Carolina State University.

His graduate research prior to coming to Wilmington dealt with birds an animal he says he learned to appreciate with his mother an avid bird watcher and father a hunter in the small town of Timmonsville South Carolina where he grew up. When he migrated to the coast Parnell found the colonial nesters of the Cape Fear.

At first glance Parnells islands appear pristine untouched and natural. But the islands were not formed by years of naturally accumulated sand. They are man-made spoil islands formed when the U.S. Army Corps of Engineers dredged the river channel years ago.

These birds Golder says “have to have it all. They wouldnt be here without these islands.”

It was the work of Parnell and his associate Robert Soots who first documented the use of the spoil islands and enticed other agencies to them when 40 years ago Parnell says nobody really cared.

“The most important thing is that we made other folks who are in the position to do so aware of what needed to be done ” Parnell explains. “Thats one of the things university people can do. We can go out and study and point out things. We dont have the authority to buy land or set land aside that sort of thing but we can point out the need for that to those folks who are in power to do it.” Since then Parnell says “A lot of agencies have become involved not just because of our work but partially because of it.”

While he was teaching Parnells lessons oftentimes involved field trips to these very same bird islands and also inspired Golder. Years down the road Golder became the first manager of Audubons sanctuary system where he essentially continues his mentors studies. During the nesting season no one is allowed on the island aside from Golder and his fellow biologists. Golder recalls a time when just one person disobeyed this statute to go camping. Six hundred nests were abandoned. Each clutch with an average of two to three eggs perished.

In the 1990s Parnells avian discoveries which expanded outside of the Cape Fear stretching from Southport to Ocracoke were recognized by the N.C. Wildlife Resources Commission when the publicly owned bird island sanctuary system was named after the professor.

Golder remains in constant contact with the U.S. Army Corps of Engineers. If and when the channel is to be dredged Golder makes the call as to which island is replenished and which should remain fertile with cedars and yaupons.

Golder looks at the birds importance from one perspective saying “Just look in southeastern North Carolina. Look in any shop. Look in any art gallery and see what important part these birds play in the local economy.”

Though the birds are plentiful Golder says “You cant just simply focus on those species that are mostly in peril. These birds would not be here if it were not for these nesting areas; and these nesting areas need to be protected and managed.”

If it werent for the Golders and the Parnells the bird islands would be much like they are during the winter just a lot of sand and the occasional gnarled cedar that washes ashore when it dies uprooted by the tides.