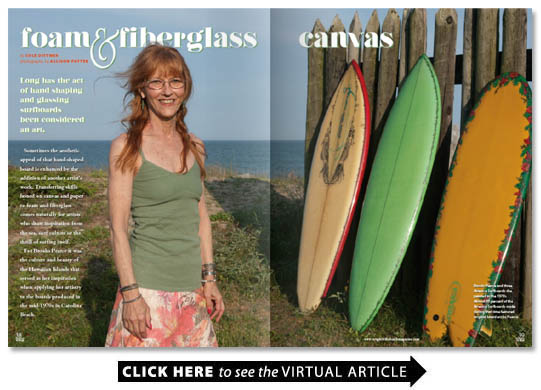 Long has the act of hand shaping and glassing surfboards been considered an art.

Sometimes the aesthetic appeal of that hand-shaped board is enhanced by the addition of another artist s work. Transferring skills honed on canvas and paper to foam and fiberglass comes naturally for artists who draw inspiration from the sea surf culture or the thrill of surfing itself.

For Brooks Pearce it was the culture and beauty of the Hawaiian Islands that served as her inspiration when applying her artistry to the boards produced in the mid-1970s in Carolina Beach.

Pearce had just returned from Hawaii where she was studying art and says the vistas of oceans mountains and tropical forests predominated her board art for America Surfboards.

I had done some painting there so I had this tropical palette in my mind Pearce says.

The board company s resident artist her artwork graced almost 99 percent of the boards made. Acrylic paint and pen and ink were the primary mediums Pearce used to paint dragons and Yes album covers perfectly barreling waves palm tress and the occasional alluring woman.

I would use acrylic paint right on the lamination coat. Using it like a canvas it adhered pretty well to the fiberglass she says. Then the sand coat would go over that and I would draw the pen and ink on it so it added a dimension to it.

In the mid-1970s a local economic slump led Pearce to California where she also drew board art for Infinity Surfboards and Jacobs Surfboards. Locally Pearce says she is always thrilled to see the few America Surfboards that remain as wall hangers.

I am amazed about how good of shape their owners kept them in for so long and I just think it is awesome that they have kept the board primarily because of the art she says.

Like the blanks produced at America Surfboards Will Allison s hand-shaped boards are the canvas for Southport native Thomas Hughes Jr. and Clark Hipolito of Raleigh.

Hughes says his artist parents classically trained him at home and his first foray into board art was drawing on his brother s boards. He painted his first board for Allison when he was 16 26 years ago and his subjects have been everything from psychedelic surf art to fish and Asian-themed tattoos.

My dad painted custom chopper motorcycles back in the 1970s so he taught me a lot of stuff with the airbrush that helped out Hughes says. Then I just started painting with paintbrushes right on the foam and defining the lines with ink pens. When you do it right on the foam the colors fade in really nicely and it is almost like a watercolor so you get some really cool effects.

Hughes  commissions he says never cease to surprise him.

Most of the requests are pretty personal he says. Sometimes I get some pretty strange requests like a duck holding a beer and if kids are getting a custom board they will almost always draw out their sketch for me.

Hughes spends an average of one to three hours on each board. However on boards that have no client he has spent up to 30 hours. One features two tarpon swimming along the ocean floor. The realistic underwater scene remains one of his favorites.

Outside Hughes  surfboard art he prefers abstract minimalism expressed in fields of color with an off center focal point.

Surfboards are more like design work or sign graphics to me but it is fun because it frees you up he says. There are some formulas I need to keep in mind but then you can run with it.

Running with an idea is no problem for Raleigh-based artist and former MTV set designer Clark Hipolito. His career in surfboard art began with a business trip to Charleston South Carolina and an old beat up surfboard he bought while visiting nearby Folly Beach.

It had duct tape all over it and I bought it for next to nothing Hipolito says. I took it back to Raleigh when I went home and decided to paint it with this wood grain painting to make it look like an old Chris Craft boat. Next thing you know everyone was asking me to paint boards.

Using acrylic paint Hipolito takes the blank canvas of a freshly glassed Allison surfboard and uses his knowledge of faux finishes to create boards resembling mahogany cocobolo tiger maple among others. The finished product has an exotic look that Hipolito says can t be found anywhere else.

I love riding classic-looking boards that have that exotic wood feel it s like driving a Rolls Royce on the water he says.

Hipolito says the frequently requested big wave gun is the best fit for his artwork.

Young surfers looking for a way to make their boards stand out are taking art into their own hands. Companies like BoardStix now make water-based acrylic paint pens specifically designed for that purpose. In the hands of artists like Carleigh Sion and Oleg Connell a plain white shortboard is their canvas.

Sion an employee at Sweetwater Surf Shop has volunteered her drawing expertise for her coworkers friends and others that have come through the shop looking for board art.

Like Hughes Sion says the requests are sometimes offbeat like the abominable snowman or a monkey hanging onto a rocket ship. Other times she is given free rein. Whatever the subject Sion says she does not like to spend more than an hour or two on any one board.

Honestly a lot of my stuff does not take days … like my regular art Sion says. I guess I get bored easily so I want to get stuff done and move on. It comes with working with watercolors because with that you have to work really fast.

In the North Lumina Avenue studio of Oleg Connell boards are transformed into colorful detailed works.

Adopted from Magadan Siberia when he was 7 Connell says he has only ever taken one art class and one drawing class but that his love for art is rooted in the doodling he started while living in a Siberian orphanage.

I started drawing when I was in the orphanage because I would always get put in time out and I would do nothing but sit in something like a cubicle Connell says. I was really big into drawing wings and angels. I had never been raised in any religion and didn t even know what that was but I always drew this woman with her kid like Mary and Jesus.

From age seven to 18 Connell spent his life in and out of surfing and art. Moving with his foster family he attended a different high school each of the four years. It was during his senior year at Hoggard High School that Connell says he got serious about his art and a natural marriage of his skills and love of surfing led him to surfboard art.

I have surfed my whole life and have always been around it so it started out with me just doodling on my friends  surfboards he says. Then people see them and ask me to do boards and suddenly it became a way I could make money and have fun doing it.

After an eight-month sojourn in Central America where he painted large murals in restaurants and hostels in exchange for food and shelter Connell returned to Wrightsville Beach and now has a steady stream of board art commissions.

With a love for traveling Connell hopes his art can take him around the world.