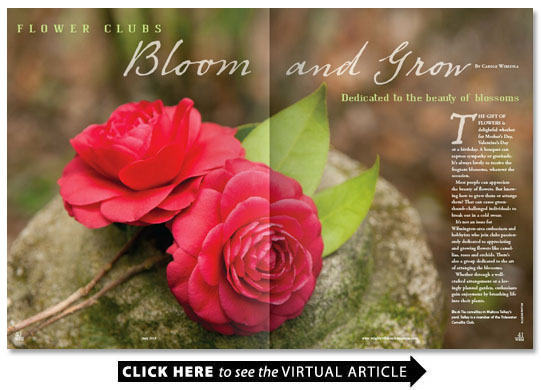 The gift of flowers is delightful whether for Mother’s Day Valentine’s Day or a birthday. A bouquet can express sympathy or gratitude. It’s always lovely to receive the fragrant blossoms whatever the occasion.

Most people can appreciate the beauty of flowers. But knowing how to grow them or arrange them? That can cause green-thumb-challenged individuals to break out in a cold sweat.

It’s not an issue for Wilmington-area enthusiasts and hobbyists who join clubs passionately dedicated to appreciating and growing flowers like camellias roses and orchids. There’s also a group dedicated to the art of arranging the blossoms.

Whether through a well-crafted arrangement or a lovingly planted garden enthusiasts gain enjoyment by breathing life into their plants.

The Tidewater Camellia Club (TCC) originally formed in 1952 as a garden club for men although women could participate in functions.

As a child longstanding and second-generation member Melissa Talley remembers her parents and neighbors enjoying gardening and her father joining the club.

Talley’s early memories are of the way her mom dressed up for camellia parties and the many hours spent preparing for social events shows and exhibits. She recalls her father being kept busy as an officer and show chairman in the club; he also served a term as president.

In the early 1970s shortly before Talley’s father died women were permitted to join.

Talley a busy wife mother and teacher didn’t join at that time but she always found time for gardening. She once claimed “My favorite flower is the gardenia ” but her love of camellias grew from her desire to have a blossoming garden throughout the year.

Camellia bushes are evergreen that bloom in the winter with flowers in beautiful shades of pink red and white.

Talley is still active in the club but no longer shows her flowers preferring to just take care of the camellias in her garden and use her teaching skills to educate children at Bradley Creek Elementary School about plants.

Even when she and John focused on show-quality camellias Talley says it didn’t require a lot of work to grow them in this climate.

“Camellias love Wilmington and with a little knowledge you can grow them easily here ” she says.

Denise Miller an officer in the Wilmington Cape Fear Rose Society (WCFRS) learned about gardening from her grandfather and her mother. She started off with just three roses: Moonstone Fame! and Love and Peace. She now has 55 different varieties.

Although Miller admits roses can be challenging she says she loves the way they look and smell.

She estimates she probably spends about two hours a week tending to her roses even when they are in season. They need to be deadheaded twice a week (a process that involves removing wilted roses from the bush) watered every two to three days and fertilized and sprayed every two weeks.

She learned early on that rose gardeners are never afraid to shovel-prune — get rid of old plants and start afresh.

Rose enthusiasts say they are worth every minute of the time you put in.

“There is nothing as rewarding as going to a rose bush cutting a perfect rose and giving it to a friend or a person who is sick ” she says.

Many friendships are born through the club.

“Gardeners are nice people who like to teach you what they know ” she says.

The WCFRS is celebrating 15 years since its inception and Miller who serves as treasurer is one of the two original members left.

Each year the club holds a garden tour an exhibition and an auction to promote the namesake bloom which is America’s national flower. The roughly 30 members come together each month to share tips on growing arranging photographing handcrafting and hybridizing. Many members end up growing new varieties as a result of seeing someone else’s and thinking “I wish I could grow that.”

Miller’s advice for anyone interested in growing roses is to just get a couple and plant them.

“It’s not that labor intensive � start small and just try it ” she says.

When you have questions come to the club for answers and learn from others. And don’t worry — roses don’t have to be perfect.

When cut flowers are in full bloom time is of the essence to get them into water before they wilt. Most just shuffle the flowers around in a way that is pleasing to the eye and is symmetrical — a common feature of western flower arranging. The whole process probably takes less than five minutes.

Flower arranging as practiced by members of the Wilmington chapter of Ikebana International takes considerably longer.

Ikebana is the Japanese art of flower arranging. It’s a skill that can take a lifetime to master.

The evolution of the practice which is based on sets of rules has resulted in several different styles. Different schools teach each variation. Three of these schools can be found in the Cape Fear region: sogetsu ohara and ikenobo. Hawse is a fifth-level professor of ikenobo the oldest and most classical form of ikebana.

Hawse became interested in flower arranging after watching her grandmother doing the church flowers. A garden club in her hometown introduced her to a woman studying ikenobo.

“I had one class and I was hooked ” she says.

Some years later Hawse attended an ikenobo program at the Lansdowne Garden Club in Wilmington and then formed an ikebana study group with friends Effie Burney Marie Kahn and Ruth Lees. The informal group grew into an official chapter of Ikebana International and now has about 35 members.

Hawse has studied the craft for many years and continues to learn.

“It’s taught me to really enjoy the moment and value the flowers ” she says.

“Each piece has its own little part ” she says.

Before the work begins the arranger diagrams both frontal and overhead views. Each stem is drawn at a specific angle to the kenzan — a base containing multiple spikes — and meticulously placed. The Japanese ascribe meaning to the color shape and position of individual flowers claiming each flower makes its own statement.

Learning is the key to growing orchids. Survival rates of the delicate flowers are much higher with some knowledge of the optimal growing conditions as Ann Gallman of the Cape Fear Orchid Society (CFOS) found out.

Several years ago a work colleague gave her an orchid but the plant died after Gallman moved to North Carolina. In her quest to find out what went wrong she joined the CFOS which now has around 60 members.

She soon learned there are more than 30 000 species of orchid and each has its own preferred culture.

“You need to know where an orchid came from in order to know the right conditions for optimal growth ” she says.

Her orchid’s cause of death was most likely the calcium in the water in the Cape Fear region.

Gallman learned quickly and her collection rapidly grew. She doesn’t have a greenhouse so when she had more than 100 plants in her house including several growing in the bathtub her husband put his foot down. She had to find new homes for many plants because well-cared-for orchids don’t die easily — orchids can live successfully for 100 years.

Gallman says there are many myths surrounding orchids such as the need to water them with slowly melting ice cubes. Instead they prefer to stand out in the rain. Club members discuss common misconceptions share knowledge and discuss plants during their monthly meetings.

Success is generally measured by the ability of the orchids to rebloom.

“Once one reblooms you want to buy another one!” Gallman says.

She is also quick to point out that potted orchids will outlast a dozen cut roses by about three months.

Naturally members of the rose society would challenge that claim by countering with the fact that some roses like the Thousand-year variety live outside for several hundred years. Camellias can also live for a couple hundred years.

While there might be some friendly “my flower is better than yours” rivalry between the clubs they all share the joy of a well-tended bloom. They are dedicated to enjoying their beauty and to sharing knowledge through their clubs.

They encourage everyone to take time out from busy schedules to stop and smell the roses — or camellias or orchids — or to appreciate an artful arrangement.