Fitness with a Purpose 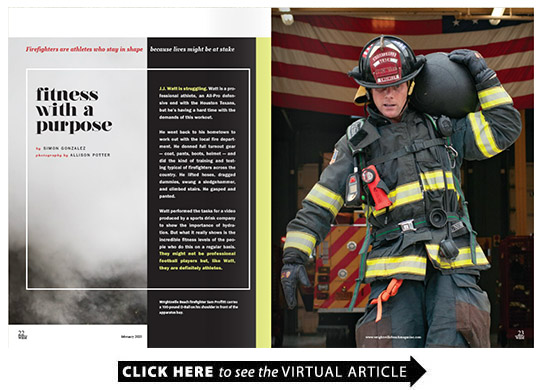 J.J. Watt is struggling. Watt is a professional athlete an All-Pro defensive end with the Houston Texans but he’s having a hard time with the demands of this workout.

He went back to his hometown to work out with the local fire department. He donned full turnout gear — coat pants boots helmet — and did the kind of training and testing typical of firefighters across the country. He lifted hoses dragged dummies swung a sledgehammer and climbed stairs. He gasped and panted.

Watt performed the tasks for a video produced by a sports drink company to show the importance of hydration. But what it really shows is the incredible fitness levels of the people who do this on a regular basis. They might not be professional football players but like Watt they are definitely athletes.

As a firefighter you should think of yourself as an athlete ” Wilmington firefighter Keith Nelson says. “We don’t just work out to stay in shape. We work out because someone’s life could depend on it. It doesn’t happen a lot it doesn’t happen every day. But when people call 911 they expect us to show up and be able to handle whatever the situation is. We absolutely have to be ready for that.”

Firefighters might achieve a modicum of notoriety if they pose for one of those ubiquitous calendars but they aren’t household names. They don’t have multimillion-dollar contracts. Their exploits aren’t televised nationally. Fans don’t clamor for their autographs. There are no fantasy leagues drafting firefighters and keeping track of their statistics.

But in communities like Wrightsville Beach and Wilmington these athletes play a much more important role than those who appear nightly on SportsCenter.

“We’re a different type of athlete ” Wrightsville Beach firefighter Sam Proffitt says. “We do different training and it’s a different type of circumstances we’re preparing to respond to. Lives depend on us being physically fit whether we’re responding on the beach strand to people in distress in a rip current or responding to a house fire and physically or forcefully making entry into a residence. It’s a huge part of the job.”

A strength and agility test is part of the screening process for prospective firefighters and all uniformed personnel must pass the test each year to keep their certification. Tasks include carrying hoses up a couple of flight of stairs ascending and descending ladders equipment carry and moving a 150-pound dummy all while wearing full turnout gear.

“It is a priority ” says Wrightsville Beach Fire Department Chief Glen Rogers. “When there’s a fire you are going 100 percent of your endurance.”

The test would be extremely difficult for the average sedentary American but for firefighters it’s not much of a challenge.

“I would say that the test is the bare minimum ” Nelson says. “The test does involve a variety of tasks that you might encounter on a fire ground but I think it barely scratches the surface. I would always encourage young firefighters especially to seek to be able to perform far beyond what is required on that test.”

That’s why there are workout sessions just about every day in fire stations throughout New Hanover County with groups of firefighters sweating together through grueling exercises.

“A big part of it is the team aspect ” says master firefighter John Feeley a nine-year veteran of the Wilmington Fire Department after serving three years at Wrightsville Beach. “You could be the strongest person in the world but you can’t do this job by yourself. We always say you are as strong as your weakest link. We want strong firefighters.”

Sometimes there are fun and challenging workouts like pickleball or dodgeball in full turnout gear. But for the most part the firefighters use equipment that can be found in most gyms. Weights. Barbells. Dumbbells. Medicine balls. Kettle bells.

The key is how they are used. Nelson a Wilmington firefighter for three years as well as a Wrightsville Beach lifeguard used to own a CrossFit gym. He leads the workouts at Station 8 off Eastwood Road tailoring them to the demands of the job.

“You never know what the task might be ” Nelson says. “It might be something short and intense for just a couple of minutes. Or it might be on the scene for a few hours. We need to be very well-rounded in our fitness. We need to be strong we need to be powerful but we also need to be flexible because we might have to move in weird positions. We need to have endurance to go for an hour or maybe more. Our workouts typically reflect that. We usually start with some strength or power-type movements and finish with cardio something that’s going to get your heart rate up.”

They work out for an hour and a half a day while on shift and are expected to exercise on their own when they are off. An hour a day is mandated by department policy.

“Whenever we are called to do something it’s because somebody is having their worst day ” says Calvin Rowell a six-year veteran of the Wilmington Fire Department. “We need to perform at the best we can. It’s not OK to be complacent. Complacent gets people hurt in our job. It’s important for us to always be at our best or we’re doing a disservice to the community.”

At Wrightsville Beach just about every afternoon a group of firefighters interns and lifeguards work out in the “meat locker ” the space in the apparatus bay where the weights are stored.

“We typically work out about the same time roughly 3:30 or 4 each day ” Proffitt says. “We have a combination of interns who live here and people on shift and also some of the lifeguards will come in and work out. It’s kind of its own social hour in the meat locker. We have people who have almost a body-builder mentality to those who are more doing some functional movements. Some people are more involved in Olympic lifts. It’s a combination and we’re trying to incorporate all of it. We typically dedicate an hour a shift to working out. By far we bypass any minimum requirement.”

Calls involving fires require full turnout gear designed to protect the firefighter from heat and flames. Consequently it is heavy. Add in full breathing gear and tools and the total weight of the equipment is north of 70 pounds.

Full turnout gear adds a layer of difficulty to even the most routine task.

“A lot of buildings here are more than one story. Just going up and down stairs wearing that gear can wear you out ” Wilmington firefighter Josh Baltz says. “You might have to remove a patient from a structure. They are dead weight. You have to be strong enough to remove them. Our tools are heavy. You might have to hold them for an extended period of time when you are on scene. We have to throw ladders on our shoulders and throw them up to a window. It all happens fast. It’ll take a toll on you.”

“Our gear makes a total difference ” says Rowell. “It’s easy to perform a simple task. I have a ladder right here climb the ladder. Simple task right? Throw on 70 pounds of gear and then have somebody walk up the same ladder. It’s going to be considerably harder. We have to get comfortable operating in that gear and comfortable with the weight or at a fire we won’t be any good.”

Even though the serious work of being a firefighter requires full gear most of the workouts at Station 8 are conducted in shorts and T-shirts.

“When we’re on shift it’s more about consistency than intensity ” Nelson says. “We don’t want to wear ourselves out and then have to go fight a fire. This time of year it’s not so bad. But in the summertime when it’s 90 degrees out you don’t want to get out here and get yourself really really hot and then go and have to fight a fire.”

“At some point we’ll do a full gear workout that’s a combination of cardio and some strength and functional fitness ” Proffitt says.

Proffitt often works out on his own in full gear.

“I’m probably more so than anyone else someone who trains extensively in my gear ” he says. “I’ll do a ruck [walking with a weighted rucksack] in full turnout gear. Sometimes there will be a time goal sometimes there will be a distance goal sometimes a heart rate goal. I’m always changing it up. I’ll do it on a treadmill on an incline or around the park. Sometimes if I’m not on shift I’ll do the Loop in full gear. Sometimes it’s Olympic lifts in full gear. When you are in gear it’s a different animal. Your skin is not able to breathe you’re not getting your perspiration to cool your body off. It quickly increases your body heat.”

Whether lifting weights jumping up on two-foot-high boxes or running the Loop in full gear the goal for these athletes is the same. Get and stay fit because lives are on the line.

“The worst thing would be going into a fire super-hot conditions blackout to where you can’t see anything and someone’s trapped inside ” Nelson says. “You don’t know where they are so you have to get in and search for them. You don’t know the layout of the building. You don’t necessarily know where the person is. You have to find them and then possibly drag them out. That would be our worst-case scenario. In the back of our minds when we come to work every day and we do our workouts that’s what we’re trying to stay prepared for.”