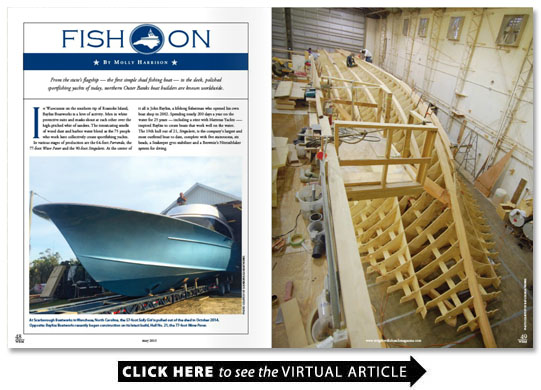 In Wanchese on the southern tip of Roanoke Island Bayliss Boatworks is a hive of activity. Men in white protective suits and masks shout at each other over the high-pitched whir of sanders. The intoxicating smells of wood dust and harbor water blend as the 75 people who work here collectively create sportfishing yachts.

In various stages of production are the 64-foot Parranda the 77-foot Wave Paver and the 90-foot Singularis. At the center of it all is John Bayliss a lifelong fisherman who opened his own boat shop in 2002. Spending nearly 200 days a year on the water for 25 years — including a stint with Hatteras Yachts  —- inspired Bayliss to create boats that work well on the water. The 19th hull out of 21 Singularis is the company’s largest and most outfitted boat to date complete with five staterooms six heads a Seakeeper gyro stabilizer and a Brownie’s NitroxMaker system for diving.

Like Bayliss some of the biggest names in North Carolina boatbuilding — Blackwell Boatworks Spencer Yachts Scarborough Boatworks Paul Mann Custom Yachts names recognized across the world — hail from Dare County in northeastern North Carolina. About a dozen local builders create boats of all sizes and finishes in Dare County but it’s the luxury sportfishing craft ranging between 50 and 90 feet that the area is best known for. Purchase contracts of $5 million $7 million even $10 million are not uncommon.

Outer Banks boat building has made gigantic strides in the last 50 years and their builders are quick to recognize the local men who charted the course for them.

The northern Outer Banks has a long tradition in boat building beginning in the 1880s with George Washington Creef who is credited with creating the wide round-bottomed shad boat for commercial fishing. The boat was such a workhorse and its design so versatile that it was used for generations and named the North Carolina state boat in 1987.

From the 1950s to the 1970s fishermen/boatbuilders Warren O’Neal; Sam Omie and Tony Tillett; and Sheldon Midgett added amenities materials and design features that helped evolve the Carolina style sportfisherman. But it’s O’Neal who is revered as a pioneer of the world-famous Carolina-style sportfishing boat.

O’Neal a commercial fisherman and captain built his first boat a flat-bottomed skiff in 1925 and a round-sterned juniper boat in 1949. When he opened his own boat shop in 1959 his first client Omie Tillett wanted a new fishing boat. Tillett and other local fishing captains encouraged O’Neal to build boats based on the new designs and techniques like those coming out of Rybovich Boatworks in Florida. Tillett and O’Neal traveled to Florida to see them. After that visit O’Neal drew up a boat that included the Rybovich-style design innovations of a broken shear line deep-V forward S frame and inset cabin. O’Neal added a Harkers Island-style flared bow and an exaggerated tumblehome.

When the resulting boat which Tillett named the Sportsman was launched in 1960 “a new standard for Carolina sportfishing boats had been established ” write Neal John and Jim Conoley in their book “Carolina Flare: Outer Banks Boatbuilding and Sportfishing Heritage ” published in 2007.

When O’Neal died in 2000 he was remembered for more than his boats.

“Perhaps most important Warren O’Neal is acclaimed as a teacher ” the Conoleys write. “He guided many of the contemporary boat builders as they started their careers and he influenced the early years of custom boat building and offshore sportfishing on the northern Outer Banks.”

“I’ve got an old Warren O’Neal boat ” Neal Conoley says. “We restored it and had Omie come over and christen it and he did a prayer for us it lasted about 30 minutes. … [Tillett] is a legend. He’s the father of all the sportfishermen more or less. He’s looked to as the one of the top fishermen in the world at his time.”

The International Game and Fish Association recognized Tillett as one of the top anglers inducted into the IGFA Hall of Fame.

“He’s a great boat builder ” Conoley says “but he only built about six or seven boats.”

Tillett was better known as a fisherman than a boat builder Conoley adds.

“He’d been fishing at Oregon Inlet since the late ’40s. He fished up until he was in his 70s.”

Bridging the gap between the functional Carolina-style boats of Warren O’Neal and the sleek sportfishing yachts of today were dozens of builders who tweaked the Carolina design in their own unique ways.

“Builders like Warren O’Neal Omie Tillett and Ricky Scarborough did a lot to establish North Carolina as one of the boatbuilding centers of the United States ” John Bayliss says. “Their boats drew much attention to our area because they were not only beautiful but also extremely seaworthy and efficient.”

But Bayliss adds there was some work to be done to bring the boats to a larger market.

“Honestly we as craftsmen had some homework to do with some of our fit/finish and systems but the foundation was there from the beginning because of those guys ” he says. “As the years progressed and our customers became more and more discerning and sophisticated the boatbuilding community of North Carolina was able to adapt improve and satisfy the needs of those people. I guess the customers themselves deserve a lot of credit for pushing all of us to be better and that’s still very true today.”

By perfecting finish and adding state-of-the-art technologies Outer Banks’ boat builders have raised the bar on sportfishing boats taking them to new levels of potential that can compete in the world market.

One of O’Neal’s proteges Buddy Davis is also credited for putting Roanoke Island –made Carolina boats on the worldwide map in part because of sheer numbers of boat sales.

The late Davis opened Davis Boatworks in 1973 in Manteo and moved the operation to Wanchese in 1974. As the demand for luxury sportfishing boats escalated between the 1980s and early 2000s Davis was in the right place at the right time with his willingness to go big to innovate and to do what it took to sell boats. He was the first island builder to experiment with fiberglass-molded semi-custom techniques which allowed him to build boats more quickly. In all he built more than 300 boats ranging from 28 to 80 feet introducing the Carolina-style flare to fishermen around the world.

Ricky Scarborough built his first boat in 1977 and his son Ricky Jr. followed in his footsteps by joining the business in 1993. Ricky Jr. says his father like a lot of other early builders got into boat building out of necessity.

“He was a commercial fisherman and a crabber and he needed a larger boat ” Scarborough says. “He couldn’t afford one so he decided to build his own.”

Ricky Sr. had worked with Omie Tillett in his boat yard for six months one winter and learned a good bit but his son says “My dad is his own person. He took what he learned and turned it into his own.”

It was such a nice boat that someone wanted to buy it so he sold it and built another one. And then another and another. To date Scarborough Boatworks has built more than 85 custom boats. Ricky Scarborough Sr. is now retired.

Ricky Jr. says sport fishermen who were going to Florida to buy boats began to take notice of North Carolina-made boats because they were seaworthy and unique. And as the local builders improved their finish work and carpentry the boats were able to compete with those made in Florida.

As in any business the processes have morphed over time and things have changed greatly from one generation to the next.

“My Dad certainly never did anything on CAD or the computer ” he says. “There was more of a personal touch with how he did it. Now everything is computer designed. Each has its own advantages. There’s not a right or wrong.”

Ricky Jr. says he didn’t have a choice about entering the family business.

“I like to create things. I love boats and being on the water ” he says. “I grew up watching him. I apprenticed under him for 20 years.”

In addition to crediting their forefathers Dare County boatbuilders share a mutual respect for each other’s work and work ethic. Their willingness to work together can be seen in the collectively formed Dare County Boat Builders Foundation that provides college scholarships for local students.

“I think there is collective spirit of pride amongst the local builders that we’ve been able to come so far in such a short period of time ” Bayliss says. “I don’t think anyone would’ve dreamed that we’d be building the boats that are as large and as detailed as today’s sportfishermen have become. But it’s a testament to the dedication and the culture that has always been part of being a boatbuilder in North Carolina.”