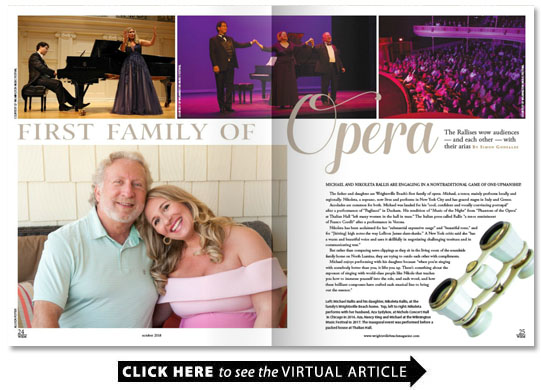 Michael and Nikoleta Rallis are engaging in a nontraditional game of one-upmanship.

The father and daughter are Wrightsville Beach’s first family of opera. Michael a tenor mainly performs locally and regionally. Nikoleta a soprano now lives and performs in New York City and has graced stages in Italy and Greece.

Accolades are common for both. Michael was lauded for his “cool confident and vocally convincing portrayal” after a performance of “Pagliacci” in Durham. His rendition of “Music of the Night” from “Phantom of the Opera” at Thalian Hall “left many women in the hall in tears.” The Italian press called Rallis “a tenor reminiscent of Franco Corelli” after a performance in Verona.

Nikoleta has been acclaimed for her “substantial expressive range” and “beautiful tone ” and for “[hitting] high notes the way LeBron James slam-dunks.” A New York critic said she “has a warm and beautiful voice and uses it skillfully in negotiating challenging tessitura and in communicating text.”

But rather than comparing news clippings as they sit in the living room of the soundside family home on North Lumina they are trying to outdo each other with compliments.

Michael enjoys performing with his daughter because “when you’re singing with somebody better than you it lifts you up. There’s something about the exposure of singing with world-class people like Nikole that teaches you how to immerse yourself into the role and each word and how these brilliant composers have crafted each musical line to bring out the essence.”

Nikoleta reflects on her dad’s ability to fit his voice lessons rehearsals and performances around his full-time job as an internal medicine specialist in Burgaw.

Nikoleta’s husband concert pianist Aza Sydykov chuckles as his wife and father-in-law laud each other.

“In this house we have one divo and a diva ” he says. “It’s a perfect combination.”

While the mutual admiration society is genuine he suggests there’s a little more to the relationship.

“I can tell that behind the scenes Nikole and my father-in-law have a very charming competition with each other ” he says. “Competition moves everything. It was always the engine of progress right? So I think that little lovely charming competition makes them always get better and better. Each time Nikole brings new ideas and technical innovation Dad picks it up and gets better and better. I think that’s how it works.”

Compliments? Friendly competition that makes both better? Clearly they’ve come a long way from the time Nikoleta thought her doctor dad was so uncool for booming out arias at any given moment.

“I grew up hearing him sing around the house ” she says. “As a little kid it’s annoying. It’s loud and it’s your dad. When he sings in the car you always want him to stop.”

Michael’s path to becoming an operatic dad was unconventional. He wasn’t much of a singer growing up — “I had a solo line in my 6th-grade Christmas show. Which I messed up ” he says. He joined a concert choir while an undergrad and enjoyed it but it wasn’t until he was in medical school at George Washington University that he became serious about it.

“From the beginning of my first year to the second semester they tripled the tuition after saying they didn’t anticipate an increase ” he says.

As consolation the school allowed the students to take any elective for free.

“I said OK and I started taking voice lessons on my lunch hour ” he says.

The voice studies were in opera and classical music. He had an aptitude and enjoyment for it and kept it up when he moved to Burgaw to open his medical practice. He began performing locally while continuing to take lessons.

John Gilmore a performer with the Metropolitan Opera was one of his coaches when he came to the University of North Carolina Wilmington as a distinguished professor one semester.

“I was a baritone. He said ‘we’re going to make you a tenor ‘” Michael says. “[Placido] Domingo did it so it’s not unheard of. Is it exceptionally difficult? Yeah. We were pushing so hard to sing in the upper register. It’s not that I couldn’t hit a high note. It was learning how to support and have the intensity and yet relax and not do anything harmful.”

The transition was worth it for the opportunity to perform on stage.

“Opera was the Hollywood of its day ” he says. “It’s very passionate and expressive. It’s vibrant. It’s different than classical choral chamber music which is equally beautiful but a little more sedate. And it was challenging. The more you do the more you have to be able to use more languages. French Italian German.”

As much as he loved opera it wasn’t something he pushed on Nikoleta. Quite the opposite in fact.

“The conscious effort was to get her to follow dad to become a physician’s assistant or doctor but that didn’t work out ” he says.

It didn’t seem he would have to worry about his daughter following the difficult path to the operatic stage when she was younger.

“I always sang and did performances but I didn’t do opera or classical music ” she says. “I did blues R&B musical theater country; that’s what I liked.”

Gradually she came to realize her uncool dad was actually pretty talented and the music wasn’t so bad either.

“He would have his voice lessons here at the house ” she says. “When I was older I would either hide upstairs or I would be down here on the couch pretending to be asleep or resting and not paying attention but I was absorbing everything.”

Her interest and Michael’s connections led to studies with acclaimed soprano Christine Weidinger who moved to North Carolina after a career in Europe.

“I had my first aria when I was 16: ‘O Mio Babbino Caro’ by Puccini ” Nikoleta says. “It was whoa this feels cool this feels different and I really liked it. If I hadn’t gone into music I think I would have done something in the medical field. But Dad was always sensitive; he didn’t try to sway me one way or the other. I wouldn’t say he encouraged me to go into music. But he didn’t discourage me. He wanted it to be my decision.”

Nikoleta went from Cape Fear Academy to Hoggard High School to the Oberlin Conservatory in Ohio then to New York City for post-graduate studies. She was at the Conservatory of Music at Brooklyn College in the fall of 2014 when she met Aza while preparing for a recital.

Actually he was paying very close attention. He just didn’t show it right away.

“From the first minute I saw her I thought this is my future wife ” he says. “I couldn’t show that I was in love immediately. It was part of the game. She’s a Wrightsville Beach girl in New York which you notice immediately. Her accent she’s more relaxed. But she had a natural ability to deliver the context of the music. I was very impressed. And of course when we met she was singing and I was playing for her. This was a meeting of two souls.”

Nikoleta and Aza are immersed in the New York opera scene but she hasn’t forgotten her roots. Last year the couple inaugurated the Wilmington Music Festival a nonprofit arts organization designed to promote the music they love through performance and education.

“I wanted to give back to my hometown ” she says. “I love it here and I love the people here. I felt like I had something to offer.”

The showcase then was a one-night event at Thalian Hall. This year the Festival takes place from Nov. 9-16 with performances scheduled the first two nights at Beckwith Recital Hall on the UNCW campus — including a “Love Story in Music” featuring Nikoleta and Aza — and a concluding concert at Thalian Hall that will almost certainly feature Wrightsville Beach’s first family of opera on stage together.

“I cannot imagine the Wilmington Music Festival without a Rallis duet ” Aza says.

It will be a reminder for Michael that although his daughter didn’t follow him into the medical field she made the right choice.

It will also be a reminder for the Wilmington audience that they have a world-class talent in the Burgaw physician and Wrightsville Beach resident.

“He could be a major star ” Aza says. “We hear all the tenors in New York. No one is like that. Sometimes you see the well-trained singers they have amazing technique but something is missing. Most of the time it’s charisma or something behind the technique. Maestro Rallis has that combination of perfect technique and personality and charisma.”

Michael has no regrets. It’s nice to hear the accolades to be called “the Carolina Caruso ” but he doesn’t ponder what might have been. He’s very content being a full-time doctor and part-time singer.

“That baseball movie with Kevin Costner ‘Field of Dreams ‘ remember the guy who was a doctor?” he says. “Somebody said to him ‘Don’t you think it was terrible that you didn’t get to have that one day in the majors?’ He said ‘No I’d feel terrible if I’d only had one day as a doctor.'”