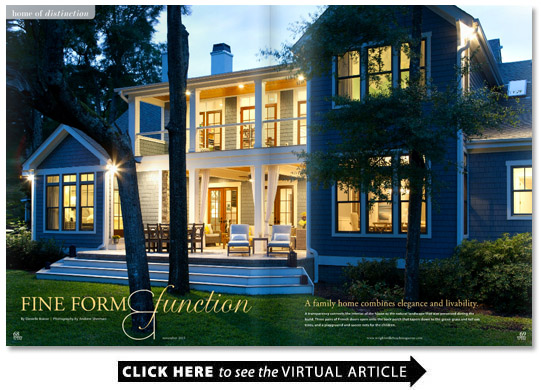 Old growth oak treesoverhang the streets in a quiet community tucked away behind Airlie Road. Unpaved passageways giant flowering foliage and wooden fences make for a quaint and intimate composition between houses and landscape.

This is where a young family came to build a home that would perfectly combine beauty and functionality for their three children and two dogs.

“They wanted a kid-friendly house that provided space for the kids and for them ” builder David James says.

The functionality begins at the back door where the kids enter from the backyard. They tuck their shoes inside cubbies hang jackets at the drop zone and pass through what the homeowners call the mom room — the command center of the home.

The mom room includes a craft table laundry area built-in desk and organized storage for arts and crafts. It is part of the wing behind the kitchen that includes a wet bar and a pantry.

“When I am in my mom room I can fold laundry the kids are reading or doing crafts and everyone is doing something they enjoy ” the homeowner says.

The homeowners had set their sights on an Airlie neighborhood.

“We wanted to live in this pocket. This is Wilmington’s best-kept secret ” they say.

The couple reached out to James who has built several homes there and happened to own the sought-after neighborhood’s last open lot. The lot has tall oak trees and is located in what James refers to as the golden triangle — the area between Eastwood and Military Cutoff with close proximity to the Intracoastal Waterway and Wrightsville Beach.

“We built a house here in 1993. Before that it was a trailer park ” James says. “It’s one of those neighborhoods where kids go fishing down the street. I think their kids will go through high school here.”

This was the first house the family would build. They worked with architect Scott Sullivan of Sullivan Design Company and spent a year finalizing plans.

“They wanted a fairly large home on a fairly small lot ” Sullivan says. “The biggest thing which I think they were surprised about was how the house laid out on the property. I felt it was best to angle the house and I got more length with the diagonal and more interior space.”

The couple acted on James’ recommendation and began working with interior designer Leslie Stachowicz of Peridot Interiors. Stachowicz assisted in interior paint color selections and the homeowners completed other material and finish selections themselves before they called her back to furnish the home and add personal touches.

The homeowners made it clear they wanted to take their time and choose pieces that fit for each space. Stachowicz made storyboards with her ideas for each room and together they shopped locally for art accessories and accent pieces.

“It was like Christmas getting new things every day ” the homeowner says.

The husband’s role became limited — “All (he) cared about was to have a TV in the kitchen and wanted to know where the Christmas tree was going ” the wife says ­– but she was involved in all of the details. Being a mother of three she sought cabinetry shelving and cubbies to eliminate clutter and keep everything organized.

“I wanted it to look inviting but still polished ” she says.

The home has a coastal cottage feel with informal living spaces and a very well appointed floor plan for 5 400 square feet.

“I wanted the flow of the house to be exactly right ” Stachowicz says. “It is very livable. There’s flow there’s storage and everything has a space. Every room does get used.”

With an open flow and a view through the house the main living spaces are practical and accommodate both adult and little people living spaces. The living room features pops of peacock blues and emerald greens cleanable upholstered furniture and custom built-ins with a chicken wire face and rain glass doors. The coffee nook between the living room and kitchen is for adult conversation or reading while the kids are eating breakfast.

The kitchen shows white on white — clean and crisp lines chrome accents floor-to-ceiling cabinets and a large island. The dining room is open yet intimate with darker gray walls and a white-planked ceiling. A farmhouse table and Low Country-style chairs offset with end of table wingbacks juxtapose with the handmade black hutch. The homeowners worked with Sullivan to design the room around the sentimental piece which a family member crafted as a wedding present for the couple.

A step-up entrance with a barn door opens to the vaulted beadboard ceiling of the master bedroom.

“I love height in the ceilings — it is soothing to me ” the homeowner says. “I wanted to be able to come in this room and decompress.”

The bedroom is orderly and offers lightness in natural daylight and color. A black four-poster bed with handspun detail on the columns was a gift from the husband’s father. The bed offers a traditional look offset by a mirrored dresser and contemporary inflections.

“I love the character of traditional classic old homes ” the homeowner says. “It’s all about the mix and juxtaposition.”

The stairwell to the second floor is bright and airy with white walls and high windows that filter in daylight. The stairs lead to a more decorative drop zone area that provides a welcoming feel with visual interest and a window seat. Around the corner is a gathering room and play area with French doors that open to a balcony with kid-sized hammocks. The cable railing that allows an unobstructed view the wood porch overhang and visible treetops create a treehouse feel for the children to enjoy as an extension of their interior play space.

Stachowicz helped arrange a collage of black-and-white photographs in the play area along with kid-friendly touches like flying pigs above the television.

“[The homeowner] has always been very clear and stayed on the same path with what she likes ” Stachowicz says. “She has a defined style but was open to fun and quirky things like the flying pigs.”

It was important to the family to hang photographs of the children and include baby pictures in each of the kids’ rooms.

“When we got these up it felt like a home ” the homeowner says.

Each of the children’s bedrooms reflects their personality — a boy’s bungalow with a sofa bed and a bedroom for each daughter showing one’s bold personality and the other’s sophisticated princess persona as the homeowner describes.

A jack and jill bathroom with bold style sits between the girls’ bedrooms. The homeowner again wanted to mix traditional and contemporary design elements and found inspiration from Houzz. Dark charcoal walls are balanced with the daylight coming in through the skylights while a traditional hexagon tile floor and clawfoot tub show distinction against sleek lights and mirrors.

“This room has a little more love and I balanced it with chrome ” the homeowner says.

The porches off the back of the home are an extension of the interior. A stone fireplace and open porch concept allow the young family to look out to a backyard filled with a playground soccer nets and tall oak trees.

“We built this to stay ” the homeowner says. “I want my house to be the place where the kids come and feel welcome. As the kids grow this is where they will want to come.”