Finding Meaning in the Mess

While artist Brooke Eagle has always favored nature and abstraction, becoming a mother pushed her to find new inspirations 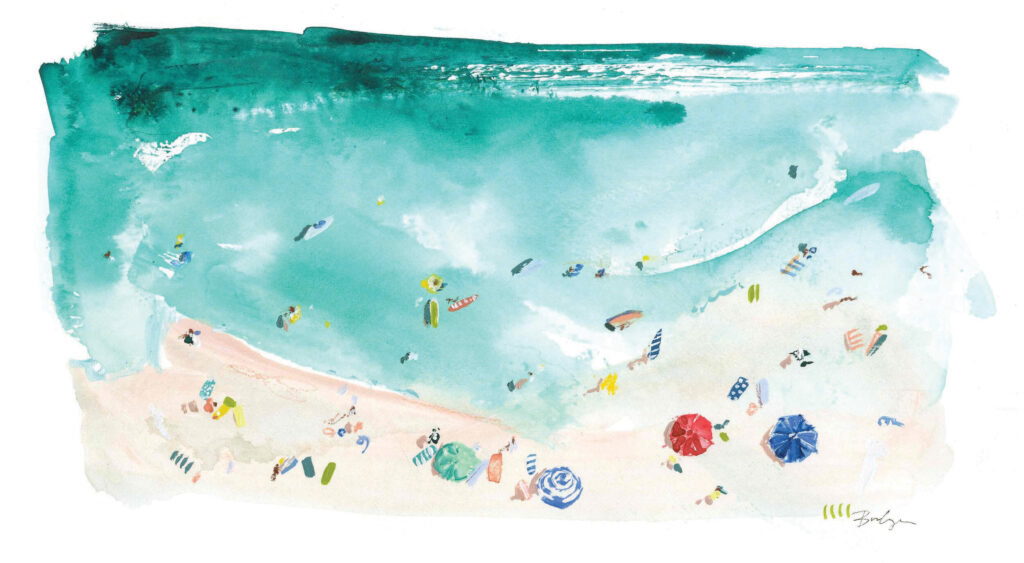 Many artists can say they’ve found inspiration from a serene beach scene, but not many have found it in a plate of spaghetti, mashed avocado on the floor, or even a cutting board dyed from various hues of chopped vegetables.

Over time, Brooke Eagle has evolved from landscapes and wildlife to abstract work told through the eyes of raising a 2-year-old daughter. She’s finding new ways to communicate the meaning in the mess.

“I did a series last year called Mundane Magic where I explored finding magic in the more mundane or harder parts of life. It started with a desperate desire to look at meals and snack time with a refreshed perspective,” says Eagle. “One day she [Eagle’s daughter] was smearing spaghetti across her tray and I saw beauty in the mess. I thought maybe if I started thinking of it as inspiration it would shift my mindset.”

Pieces from this collection assert the balance of a messy kitchen complemented by warm pastels in abstract shapes. Eagle, who mainly works in acrylic, prefers to use thinned paints to create a flow of color on the canvas. Scraping away at the layers creates dimension, birthing colors one cannot name. Delicate details are added through pastels, crayon and pencils.

Color inspiration has even been found in her daughter’s favorite sippy cups, one hot pink and one light pink, displayed in Macaroni from the series.

“I spend a lot more time outside in a slower way walking around the backyard and going to parks and the beach. Trying to keep her interested, that has pushed me to be in nature more,” she says. “I can focus in on the moment, playing with her and showing her little things I’d never pay attention to, like little crabs digging their holes and watching the birds. I find so much of my inspiration through my daughter now.”

She hasn’t always found creative vision from a highchair after dinner time. Earlier works depict landscapes seen from her home on the waterway and international travels. Eagle, who received a degree in Studio Art from the University of North Carolina Wilmington, is accustomed to stepping into beauty, instead of having to search for it.

From seascapes to the way the sun ripples on the water while gliding on a kayak, much of her landscape and wildlife pieces are inspired by home. One of her first aha moments as an artist was at the North Carolina Holiday Flotilla in Wrightsville Beach.

“In high school, I started painting personalized ornaments and signs as Christmas gifts for friends and family,” she says. “I ended up selling them in a booth at the Wrightsville Beach Flotilla craft show. To my surprise, I did well. It really showed me that this could be more than a hobby.”

It has evolved from more than a hobby to a career.

Before her Mundane Magic series, Eagle focused on coastal landscapes depicted in abstract ways. The muddled water that winds through seagrass has no sharp end or edge. It intermingles while subjects flow onto one another, recalling the relaxing exhale one feels when viewing such scenery.

Her Moments in the Marsh series includes works like Arise, Colors of the Wind and Citrus Sea, painted in neutral tones of blue-gray and muted salmon pink.

In both Mundane Magic and Moments in the Marsh, Eagle uses an abstract focus to interpret a world subjective to the viewer. She prefers to use multiple brushes atop caked layers, lending a windswept feel. While displaying a seascape or egret, the details and dimension speak to Wilmington but also other coastlines.

Before their daughter was born, Eagle and her husband traveled full time from 2017-2018, “chasing summer” as she says, visiting destinations including Thailand, Indonesia, Hawaii and Italy. Viewing foreign landscapes helped Eagle find her footing and color palettes of choice, including rich turquoise tones. While she enjoyed her travels in the moment, inspiration flowed when she arrived home. This included a series for TUSC Boutique in Mayfaire, where her creations complemented items in the store.

Her aerial beach scenes depict mid-summer, with dotted subjects lounging about a pastel sandscape. Minute details are revealed through striped beach towels and umbrellas in pops of fuchsia. Folds of the sea, as one would see from above, change in color from azure to steel then sapphire.

Commissioned works of birds, crabs, and oysters allow Eagle to provide abstract touches atop firm subject matter. Much like her marsh paintings, the birds are both apparent yet almost an idea. In Flocked, several egrets add dimension to a splattered background of mustard yellow, beige and ice blue. Dandelion displays her enjoyment for letting paint drip as a pelican sits center focus.

“My art is definitely inspired by how I view the world and how I’d like to display the world for others,” she says. “Sometimes I forget and am reminded that how I see a bird is very different from how someone else may see it. It’s a lot of fun to me to emphasize the feathers dancing in the wind, adding colors that may not actually be there.”

While commissioned pieces, wildlife and scenery establish the foundation of her work, she views the Mundane Magic series as one of her proudest artistic achievements. A similar series is in the works.

“What was so fun with Mundane Magic was I just wanted to do it because I was feeling super inspired. I wanted people to look at a piece they bought on a wall and say they’re having the same struggle as me and be reminded,” says Eagle. “It stuck with me because it had so much meaning behind it. It tied in also to giving back to NourishNC (20 percent of all sales were donated). Just how it all came together, it felt beautiful.”