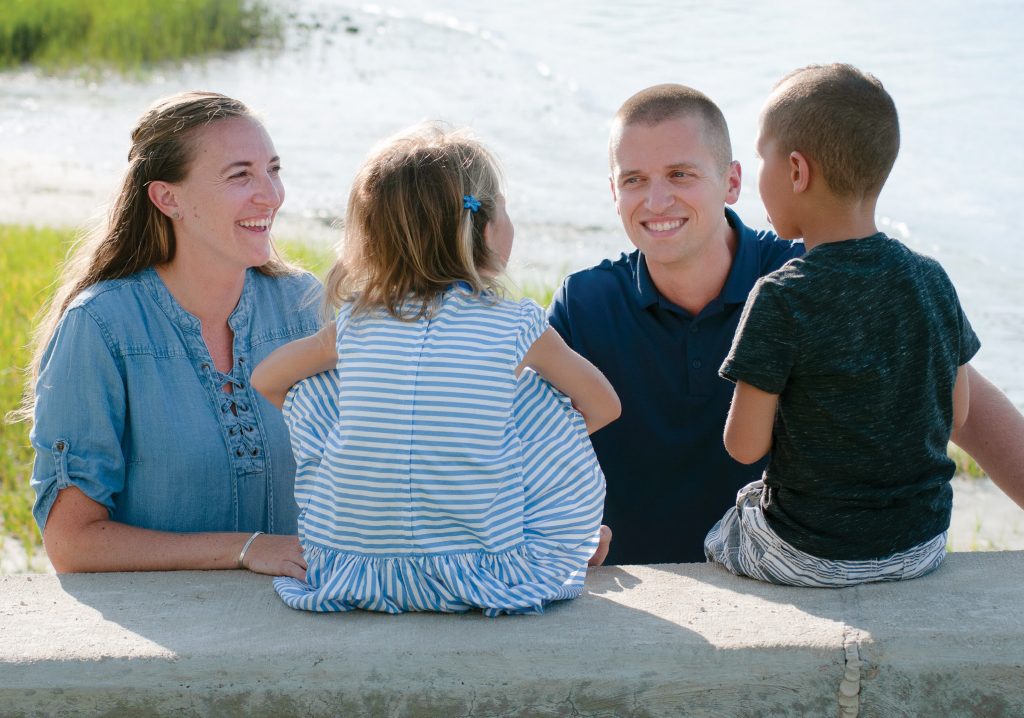 Siblings Seyla and Myles were among the thousands of children in North Carolina’s foster care system until they found their forever home with Corey and Kylee Maarschalk of Wrightsville Beach. | Allison Potter

There are more than 400,000 children and teens in foster care in the United States waiting for loving, permanent “forever” families; approximately 11,000 are in North Carolina. Entering the foster care system can be a daunting experience. Being whisked away from everything you know, regardless of good or bad, and being placed into unfamiliar territory with strangers is a terrifying thing to go through at any age.

Foster families can provide a safe, loving environment for vulnerable children. With encouragement and love, the children can quickly adapt and truly thrive. In simple terms, fostering can make a real difference to children in need.

One New Hanover County family making that difference is the Maarschalk family of Wrightsville Beach.

Corey and Kylee Maarschalk always felt a calling to adopt. In 2017, they began to look into international adoption. After hitting multiple roadblocks, Corey proposed the idea of fostering a local child. The idea initially concerned Kylee. Fostering can be temporary, and, as a teacher at New Hanover High School, she knew giving up a child would be hard.

“I cry like a baby every year at graduation,” she says. “I couldn’t imagine having to say goodbye to a child who actually lived with us.”

After much thought and prayer, Kylee and Corey decided to meet with a social worker from the New Hanover County Department of Social Services (DSS) to have a conversation. The couple learned that although the county had the second-highest number of families licensed to take in foster children in the state, it wasn’t nearly enough.

“I was rocked in that conversation,” Kylee says. “At that time, there were about 425 children in foster care in New Hanover County and only about 100 families licensed to take in those children.”

At the end of this informative conversation, the social worker told the Maarschalks that he would leave the paperwork with them so they could take their time to make a decision.      Kylee immediately jumped up and said, “Let me grab my pen. I’m in.”

The Maarschalks began training with the DSS, taking classes with other families who wanted to make a difference and foster children in need of homes. After completing the course, filling out the last of the paperwork, and taking the time to prepare for a new addition to the family, Kylee got a phone call that there was a pair of siblings, Myles, a 4-year-old boy, and Seyla, a 2-year-old girl, in need of respite care for about a month. Respite care allows a family to temporarily take another family’s foster children, giving the original family a break so they can get away for a bit.

‘‘I called my husband to ask him what he thought and without hesitation, he said, ‘Let’s do it,’” Kylee says.

Two days later, the couple met their new foster children. The kids got in the car and while Myles appeared excited for this change, Seyla was a bit skeptical.

“I’m pretty certain that we had about seven or eight different activities planned for that day and probably made it through all of the activities in about 45 minutes,” Corey says.

Corey and Kylee fostered the children for months, taking them to doctor appointments, weekly family visits, therapist and social worker meetings, and more. The couple powered through these trying times in an attempt to keep consistency in a difficult situation.

‘‘I remember one night, Corey and I went out to see the movie “Instant Family” and that movie is really so accurate,” Kylee says. “A woman sitting next to us in the theater said to me, ‘My goodness! How in the world do you handle all that?’ and I said, ‘A whole lot of prayer.’”

The couple were able to utilize the amazing tools the community has to offer, such as the Foster Pantry and the North Carolina Guardian ad Litem, which equip families and children with essential resources and advocate for their best interests.

“We needed to speak the language of foster care and adoption with people who understood those same terms,” Kylee says. “So, going to support groups and joining Facebook groups really helped us during that time.”

The primary plan for Seyla and Myles was reunification with their biological family, but because they had already been in the system for over nine months the case shifted to adoption. In May 2019, the Maarschalks attended a termination of parental rights hearing.

“About halfway through that hearing, our kids’ biological parents decided to make the brave choice to relinquish their rights to us,” Kylee says. “We both still grieve for them in having to make that decision.”

After leaving that day, the couple knew things were not official yet. The biological parents had seven days to change their minds.

“It was a constant fear of the phone ringing,” Kylee says.

After seven long days the couple finally were able to breathe a sigh of relief, and after a few more months of finalizing paperwork, Seyla and Myles were officially Maarschalks.

Life is fuller for the Maarschalk family now and they have been enjoying every moment spent together.

“The kiddos have personality for days,” Kylee says.

Seyla is now 5 and loves all things unicorns and rainbows. Myles will turn 7 this year and is ecstatic to be going into first grade. The siblings love going to the beach and will swim in the water for hours.

Myles says, “I like what we get to eat and that we pray to God.”

Seyla comments, “It’s great! I loved our celebration party! When can we have one again?”

To others wanting to begin the foster care or adoption journey, Corey advises jumping in and helping any way you can.

“There are a lot of kids that are hurting and if you have a home in which you can help mend that hurt, you should find that need and fill it,” he says.

Potential foster families received a boost from the White House on June 24, when President Donald Trump signed an executive order to strengthen the United States child welfare system. The order will work to improve partnerships, resources, and oversight and will help to empower families opening their hearts and homes to children in need.

If not in a position to open your home at this moment, the Maarschalks recommend being a support to foster parents.

“Some children in foster care have been abused, neglected or are without an appropriate adult to care for them. These children need families from our community to open their hearts and homes to them,” says a representative from New Hanover DSS who did not want to give her name. “Foster and adoptive parents are needed, and we invite you to learn more and help in any capacity!”