BY By Marimar McNaughton 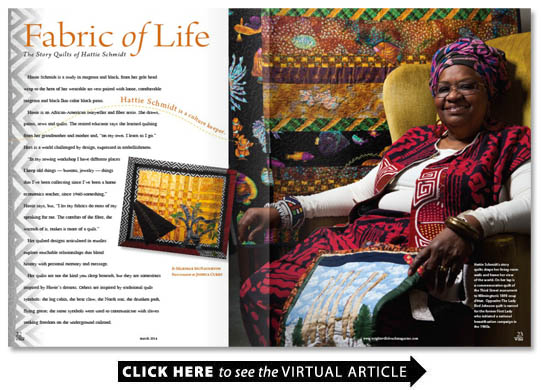 The Story Quilts of Hattie Schmidt

Hattie is an African-American storyteller and fiber artist. She draws paints sews and quilts. The retired educator says she learned quilting from her grandmother and mother and on my own. I learn as I go. Hers is a world challenged by design expressed in embellishment.

In my sewing workshop I have different places I keep old things — buttons jewelry — things that Ive been collecting since Ive been a home economics teacher since 1960-something Hattie says but I let my fabrics do most of my speaking for me. The comfort of the fiber the warmth of it makes it more of a quilt.

Hattie Schmidt is a culture keeper.

Her quilts are not the kind you sleep beneath but they are sometimes inspired by Hatties dreams. Others are inspired by traditional quilt symbols: the log cabin the bear claw the North star the drunken path flying geese; the same symbols were used to communicate with slaves seeking freedom on the underground railroad.

The culture keeper thing kicked in when my mother was 80-something. She worked in the community hospital — the black hospital — behind my grandmothers house at Eleventh and Castle Hattie says. I started thinking about the history then. I never could get any information as to my history my background. We sort of breezed over it in school but then I thought Nobodys going to teach me. Why cant I learn for myself? Thats when I decided to start asking questions.

Her mother was Gullah Geechee from Santee in Georgetown County South Carolina.

As a child they used to take us there on Sundays that was our ride out Hattie says.

Those Sunday drives carried the family past a motel on the other side of the Cape Fear River.

With that memory Hattie hunted for and found a miniature lawn jockey wearing a red coat and white pants his black hand holds a ring where a lantern might hang. Hatties Jocko stands in her sewing room in front of a quilt she designed Will the Real Jocko Stand Up?

She tells her story of the real Jocko: He was holding the horses for George Washington and froze to death. They possibly used him [the statue] as a lantern for underground slaves. Jocko is painted black Jocko is painted brown Jocko is painted white. My children say Mom just forget about it but its my history.

Her father Cleo Williamson a Wilmington merchant landlord longshoreman and trucker was from Evergreen on the Lumber River near Lumberton North Carolina. Born in Mullins South Carolina Hatties family moved to Wilmington when she was four years old.

I remember Daddy taking us crabbing and clamming we was always part of the sea and the ocean she says.

Sea themes wend their way into her quilts as fabric representing moving water and shells or whatever the ocean might fetch up are used for embellishment.

In her sewing room she has six seven or eight quilts in process at any given time. One is inspired by Faith Ringgolds childrens book Tar Beach. Ringgold exhibited her work at the Cameron Art Museum in 2006. As a member of the African American Quilt Circle of Durham North Carolina Hattie met the famous fiber artist in Greensboro North Carolina during a North Carolina Art Teachers Conference circa 2009. Hattie founded the First Culture African-American Quilting Circle which meets weekly at St. Marks AME Church. Shes also a member of the Seacoast Quilters but does not identify herself as a traditional quilter. Hattie explains the difference between traditional quilting and African-American quilting as pulling from the traditions and adding our stories to that — quilt art as well as quilting. I have done some traditional but its not as creative to me. Im not a fine point line point [quilter]. If my lines are off to me thats creation.

Other works in progress include a tribute to a quilting workshop she attended at her alma mater A&T University where she earned an undergraduate degree in 1963 in home economic education with a minor in cooperative extension. After pursuing her career in South and North Carolina for several years she relocated to Washington D.C. to seek a better pay scale. For nine years she schooled international students in home economics science food and nutrition and after-school crafts. She also earned a masters in education administration from Antioch and met her husband Jim Schmidt.

When the Schmidts moved to Wilmington Hattie taught school for another 28 years at Trask Middle and Laney High schools.

An abstract black white and gray scale quilt tells the story of her retirement and her expectations of having discretionary income and time to do the things she loves. Instead paper money flies out of the window. It illustrates a hobby playing the piano something she picked up from her father. But the subject is not lost on the medium.

I wanted to learn to bead so I put in a beaded face she says.

The only blaze of color stitched into the lower right corner is a red rectangle with gold lettering.

Im a Delta Sigma Theta she says interpreting the Greek symbols of the sorority grounded in public service outreach to her African-American community.

Hattie is working on another self-portrait quilt. She says its a spiritual piece featuring cursive writing.

They stopped teaching cursive writing in the schools she says. I read that in China their writing is very important to their culture.

Framed with cloth that represents cathedral stained-glass windowpanes Hattie explains My name is Hattie so you see Hattie all in there. She shares a hand-painted self-portrait panel. Her cursive signature — Hattie Schmidt — is entwined in her hair and appears along the edges of the portrait outlined in bold strokes of yellow. She plans to attach her haloed self-portrait to the stained-glass fabric along with Biblical proverbs.

She pauses taps the teacher in her.

Im telling these kids: Living life backwards makes a lot of sense to me. If you had known what you know now how different you would be in some things.

Finding the right fabrics to express her design machine stitching the pieces together adding her idiomatic decorative stippling and hand-crocheted stitches can take more than a year sometimes.

Her daughter brings her fiber panels from foreign countries. A rice husking batik from Mali is showcased in a Gullah quilt one of many in a pile of quilts draped across a table in her living room filled with keepsakes and icons.

My husband says the house is a museum. It becomes part of living and I enjoy everything I have Hattie says.

One is a gift from Mexico a Frida Kahlo self-portrait transferred to fabric. It sits at eye level on a living-room chair where Hattie can study it from her wing back. One day the Kahlo will become the centerpiece in one of Hatties story quilts but Hatties not sure if she wants to tell Fridas story or the story of the artists symbolism.

I have to dream it or think it and then it comes together she says.