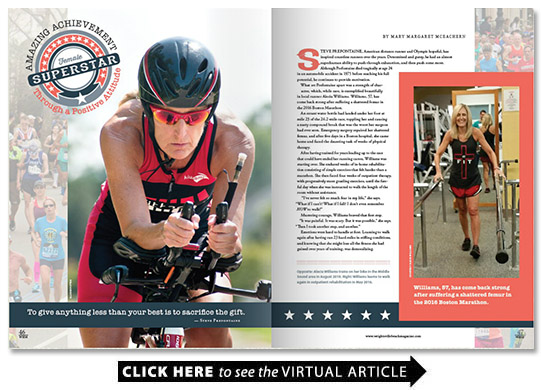 Steve Prefontaine American distance runner and Olympic hopeful has inspired countless runners over the years. Determined and gutsy he had an almost superhuman ability to push through exhaustion and then push some more. Although Prefontaine died tragically at age 24 in an automobile accident in 1975 before reaching his full potential he continues to provide motivation.

What set Prefontaine apart was a strength of character which while rare is exemplified beautifully in local runner Alecia Williams. Williams 57 has come back strong after suffering a shattered femur in the 2016 Boston Marathon.

An errant water bottle had landed under her foot at mile 23 of the 26.2-mile race toppling her and causing a nasty compound break that was the worst her surgeon had ever seen. Emergency surgery repaired her shattered femur and after five days in a Boston hospital she came home and faced thedaunting task of weeks of physical therapy.

After having trained for years leading up to the race that could have ended her running career Williams was starting over. She endured weeks of in-home rehabilitation consisting of simple exercises that felt harder than a marathon. She then faced four weeks of outpatient therapy with progressively more grueling exercises until the fateful day when she was instructed to walk the length of the room without assistance.

“It was painful. It was scary. But it was possible ” she says. “Then I took another step and another.”

Emotions were hard to handle at first. Learning to walk again after having run 23 hard miles in stifling conditions and knowing that she might lose all the fitness she had gained over years of training was demoralizing.

Williams had been athletic most of her life but had not considered running until 2002. She entered a race won it and became hooked. She posted impressive results over the next several years in distances ranging from 5 kilometers to the half marathon (13.1 miles). It was during her first full marathon that she suffered her first major setback a debilitating injury to her foot.

The injury cost months of training but Williams like Prefontaine is determined tough and dedicated. She cannot admit defeat. Common among world-class athletes and other highly successful people this character trait propels people like Williams to highs allowing them to inspire others to achieve their own goals.

That fortitude of character allowed Williams to survive her late 40s “that awful phase in a woman’s life called menopause the point in life where the nuts bolts screws and wheels all come off at the same time ” she says. “Injury after injury hormonal changes mood swings sleepless nights heart palpitations you name it!”

Desperate to continue competing despite suffering chronic running injuries Williams turned to triathlons to quench her competitive thirst. Again she proved successful placing on the podium in virtually every race she entered.

The fitness she gained from triathlons paid off. She ran her second marathon in a blistering 3 hours and 42 minutes stamping her ticket to the 2015 Boston Marathon a race with very strict qualifying standards for all ages.

“I was raring to go ” she says. “When I made that finish line I choked up with emotion. It was one of my greatest experiences.”

Williams ran well enough to requalify for the following year. Little did she know that race would hand her a challenge that would end most runners’ careers.

On race day the weather in Boston was hot dry and miserable. Dehydration cramping and heat exhaustion ran rampant among the runners. Despite the conditions Williams ran a strong pace for 23 miles. Then it happened.

“I felt something in my left thigh snap ” she says. “My leg went numb flailing about like a limp noodle. It took no time to tell that it was broken! My calves quads shins back feet and diaphragm went haywire cramping from dehydration.”

Williams’ world had been transformed instantly from one of perfect order and well-executed plans to one of excruciating pain swelling beyond belief and chaos.

“We’ve all heard that a picture is worth a thousand words ” she says. “But when I saw my X-ray there were no words only a thousand questions: What can be done to fix this? How long will I have to stay in Boston? How will I get home? Will I ever walk again let alone run?”

For several weeks after she arrived home her running friends brought meals every evening.

“I was touched by the outpouring of love ” Williams says. “I could hardly eat because the pain meds left me with little appetite but I enjoyed their visits and encouragement. They made me smile but my emotions were in turmoil. I was angry with that person who so carelessly discarded the water bottle that precipitated my fall. I had prayed for protection so how could this have happened?”

“I am insanely independent; I have never faced having to depend on anyone for anything ” she says. “It humbled me. I was forced to rely on my husband family and friends.”

“It was incredibly painful ” she says.

The pain was caused by one of the screws holding her leg together. It had worked its way out and was damaging her knee.

“I was told that the whole thing needed to be redone or I’d never walk normally let alone run again. I threw an internal tantrum. I cannot go through this again!” she says. “But I will never forget what my coach Tom Clifford said to me: ‘You have to stop focusing on what happened and why it had to happen to you. None of us has been through or can understand what you are going through. Maybe God chose you because you are strong enough to handle it. I do know that the sooner you get it redone the faster you will get back to running!’ What? But he was right. It must be redone. Here I was eight months later in my mid-50s having to learn to walk again.”

Eventually Williams did walk then she ran then reluctantly she entered the Wrightsville Beach Triathlon. The race took place in the fall of 2017 roughly one and a half years after she broke her femur. She would be required to swim a little over 1 200 yards ride her bike 11.5 miles then run 3.1 miles.

“I had always placed on the podium in the past but what was once my strength — running — had become my weakness ” she says.

Overcoming her fears she placed second in her age group having passed several competitors during the run. Almost impossibly she did it even though her leg had not healed properly and was still in two pieces.

An X-ray confirmed Williams’ worst fear — she would need yet another operation. What according to the surgeon would be a relatively minor procedure required five hours because the gap in her leg where bone had failed to regrow was large.

“For the third time in my mid-50s I had to relearn how to walk ” she says.

“This was not only a physical journey to battle back from a devastating injury but also a mental and spiritual journey ” she says. “As soon as possible after each surgery I worked out my upper body.”

Unable to run bike or even swim and still on crutches she did what she could. After a friend spied her training at the gym despite using crutches he posted: “I’m not one to be impressed by what people have accomplished but by what they’ve overcome!”

Williams didn’t intentionally strive to provide Prefontaine-like inspiration but she’s happy to be a positive example of perseverance.

“I remember reading years ago that if you can’t be a good example you will be a horrible warning ” she says. “I had told myself from the beginning that this was not going to define me and that I would run again!”

Having already overcome obstacles that would wither a lesser mortal Williams continues to strive for excellence. She is running more miles tackling more tough track sessions and devoting even more time to the gym.

No doubt she will run Boston triumph over mile 23 and again experience the euphoria that accompanies crossing the finish line.