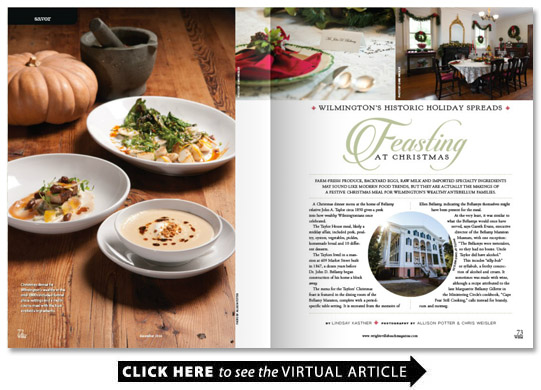 Farm-fresh produce backyard eggs raw milk and imported specialty ingredients may sound like modern food trends but they are actually the makings of a festive Christmas meal for Wilmington’s wealthy antebellum families.

A Christmas dinner menu at the home of Bellamy relative John A. Taylor circa 1850 gives a peek into how wealthy Wilmingtonians once celebrated.

The Taylors lived in a mansion at 409 Market Street built in 1847 a dozen years before Dr. John D. Bellamy began construction of his home a block away.

The menu for the Taylors’ Christmas feast is featured in the dining room of the Bellamy Mansion complete with a period-specific table setting. It is recreated from the memoirs of Ellen Bellamy indicating the Bellamys themselves might have been present for the meal.

At the very least it was similar to what the Bellamys would once have served says Gareth Evans executive director of the Bellamy Mansion Museum with one exception: “The Bellamys were teetotalers so they had no booze. Uncle Taylor did have alcohol.”

This incudes “silly-bub” or syllabub a frothy concoction of alcohol and cream. It sometimes was made with wine although a recipe attributed to the late Marguerite Bellamy Gillette in the Ministering Circle’s cookbook “Cape Fear Still Cooking ” calls instead for brandy rum and nutmeg.

The Taylor menu also features “brandy peaches ” a dish doused in spiked sugar syrup and served as a side alongside various meats and vegetables. A recipe in Mary Randolph’s seminal 1824 cookbook “The Virginia Housewife” calls for first soaking the peaches in lye to remove the fuzzy peels.

Dessert included Sally White cake a sort of rich fruitcake that appears to have been quite popular in North Carolina at one time. A 20th-century recipe attributed to Wilmington resident and wife of Episcopal Bishop Thomas C. Darst calls for one pound of butter one and one-half pounds of sugar one dozen eggs and copious amounts of almonds coconut and citron.

In the headnote to a very similar 19th-century recipe North Carolinian Florence Kidder writes that Sally White cake “is delicious and if I am not mistaken has yet only a local fame but it should have a national one.”

Though some of the foods enjoyed back then have long since fallen out of favor in other ways the antebellum meal wasn’t far removed from the dinners that will grace many Wilmington tables this Christmas season.

“We eat a lot of birds and pork in this part of the world still ” Evans says.

Then as now beef was not a big feature of the Christmas menu but that was not necessarily by choice or custom.

“They didn’t have a lot of beef ” Evans says noting that beef cattle were raised primarily in the Midwest and the meatpacking plants that helped to widen beef’s appeal didn’t make an appearance until much later.

As a wealthy urban family that also owned land outside the city the Bellamys “had the best of all worlds ” Evans says.

Their diet included produce from their plantations: Grovely in Winnabow and Grist near Lumberton. Milk came courtesy of a dairy cow kept at the downtown mansion and led to pasture each day on the outskirts of town. The property was also home to chickens which kept the family supplied with eggs.

“They were rich and they were five blocks from what was the biggest port in the state right at the foot of Market Street ” Evans says.

This meant the Bellamys could dine on coconut pineapple coffee and other non-native foods.

“They could afford sugar in sugar cones ” Evans says.

An even greater luxury was ice from one of the three or four ice houses downtown which allowed for making treats such as ice cream and for keeping perishable foods fresh.

The Christmas meal included some of the same dishes eaten on ordinary days just many more of them. Summer produce preserved as pickles and jellies supplemented wintertime root vegetables.

The Taylor House menu doesn’t specify what kinds of pickles were served but “The Virginia Housewife” includes instructions for pickling everything from nasturtium pods to green nectarines.

“Old pickling recipes are kind of interesting and fun ” says Dean Neff executive chef and owner of Pinpoint Restaurant. Neff will cook a multi-course meal of reimagined period recipes during a February fundraiser for the Bellamy.

While some dishes point to the Bellamys’ British heritage others clearly hail from their African slaves. A slave named Sarah Miller cooked all of the meals for the household which numbered about 20 including nine slaves.

Evans says Miller likely had help from another slave for holiday preparations and the Bellamy women probably stayed out of the kitchen.

The slaves would likely have eaten some variation of what the Bellamys themselves ate since there was no time for Miller to prepare separate meals.

“All the best prime stuff went to the family and the chicken feet things like that went to the slaves ” Evans says.

Neff says slaves were resourceful and talented at working with these castoffs using spices and “skillful techniques” to make the most of vegetables grains and lesser cuts of meat.

lot of really thoughtful cooking has come from West Africa ” he says.

The sort of nose-to-tail and farm-to-table cooking that has become popular in recent years was once standard practice even for families like the Bellamys that could afford lavish holiday spreads.

Take the mince pie featured at the Taylor House Christmas dinner. Modern recipes for mincemeat include dried and candied fruits but the dish once included meat too.

The 1931 book “Two Hundred Years of Charleston Cooking” includes a recipe for mincemeat from South Carolina’s Nieuport Plantation that calls for “one beef tongue boiled and chopped very fine.”

“There was a greater connection with people and their food ” Neff says. “There’s been a kind of disconnect in recent history with people not really wanting to know where their food has come from. It’s kind of a responsibility I feel like to take that back on and understand that.”