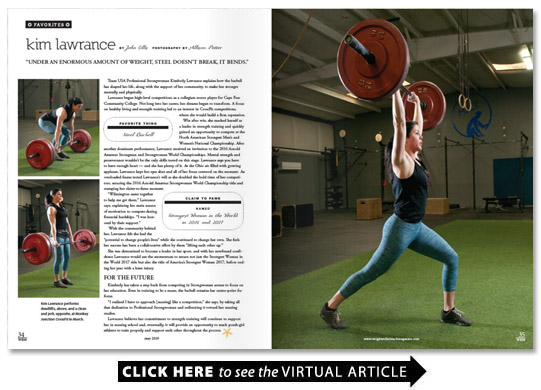 Team USA Professional Strongwoman Kimberly Lawrance explains how the barbell has shaped her life along with the support of her community to make her stronger mentally and physically.

Lawrance began high-level competitions as a collegiate soccer player for Cape Fear Community College. Not long into her career her dreams began to transform. A focus on healthy living and strength training led to an interest in CrossFit competitions where she would build a firm reputation.

Win after win she marked herself as a leader in strength training and quickly gained an opportunity to compete at the North American Strongest Men’s and Women’s National Championship. After another dominant performance Lawrance received an invitation to the 2016 Arnold Amateur Strongman and Strongwoman World Championships. Mental strength and perseverance wouldn’t be the only skills tested on this stage. Lawrance says you have to have enough heart — and she has plenty of it. As the Ohio air filled with growing applause Lawrance kept her eyes shut and all of her focus centered on the moment. An overloaded frame tested Lawrance’s will as she doubled the hold time of her competitors securing the 2016 Arnold Amateur Strongwoman World Championship title and stamping her claim-to-fame moment.

“Wilmington came together to help me get there ” Lawrance says explaining her main source of motivation to compete during financial hardships. “I was honored by their support.”

With the community behind her Lawrance felt she had the “potential to change people’s lives” while she continued to change her own. She feels her success has been a collaborative effort by them “lifting each other up.”

She was determined to become a leader in her sport and with her newfound confidence Lawrance would use the momentum to secure not just the Strongest Woman in the World 2017 title but also the title of America’s Strongest Woman 2017 before ending her year with a knee injury.

Kimberly has taken a step back from competing in Strongwoman arenas to focus on her education. Even in training to be a nurse the barbell remains her center-point for focus.

“I realized I have to approach [nursing] like a competition ” she says by taking all that dedication to Professional Strongwoman and redirecting it toward her nursing studies.

Lawrance believes her commitment to strength training will continue to support her in nursing school and eventually it will provide an opportunity to teach youth-girl athletes to train properly and support each other throughout the process.