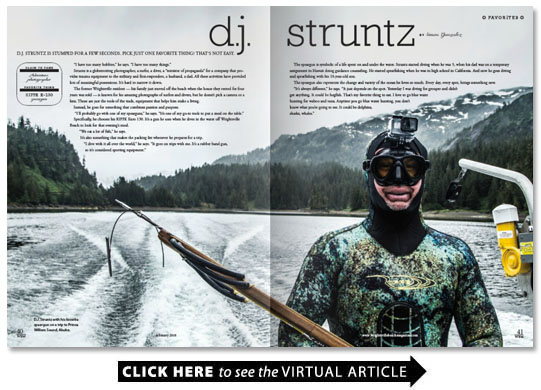 D.J. Struntz is stumped for a few seconds. Pick just one favorite thing? That’s not easy.

Struntz is a globetrotting photographer a surfer a diver a “minister of propaganda” for a company that provides trauma equipment to the military and first-responders a husband a dad. All these activities have provided lots of meaningful possessions. It’s hard to narrow it down.

The former Wrightsville resident — his family just moved off the beach when the house they rented for four years was sold — is known for his amazing photographs of surfers and divers but he doesn’t pick a camera or a lens. Those are just the tools of the trade equipment that helps him make a living.

Instead he goes for something that combines passion and purpose.

“I’ll probably go with one of my spearguns ” he says. “It’s one of my go-to tools to put a meal on the table.”

Specifically he chooses his RIFFE Euro 130. It’s a gun he uses when he dives in the water off Wrightsville Beach to look for that evening’s meal.

It’s also something that makes the packing list whenever he prepares for a trip.

“I dive with it all over the world ” he says. “It goes on trips with me. It’s a rubber band gun so it’s considered sporting equipment.”

The speargun is symbolic of a life spent on and under the water. Struntz started diving when he was 5 when his dad was on a temporary assignment in Hawaii doing guidance counseling. He started spearfishing when he was in high school in California. And now he goes diving and spearfishing with his 10-year-old son.

The speargun also represents the change and variety of the ocean he loves so much. Every day every spot brings something new.