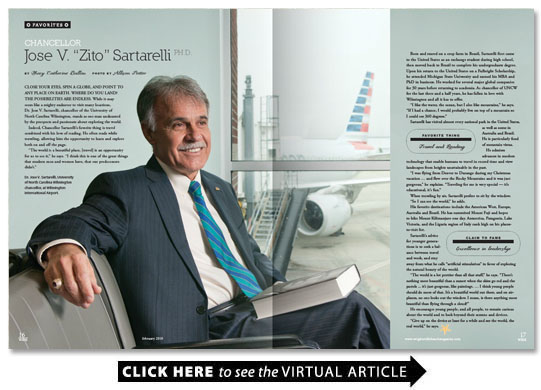 Claim to Fame: Excellence in leadership

Close your eyes spin a globe and point to any place on earth. Where do you land? The possibilities are endless. While it may seem like a mighty endeavor to visit many locations Dr. Jose V. Sartarelli chancellor of the University of North Carolina Wilmington stands as one man undaunted by the prospects and passionate about exploring the world.

Indeed Chancellor Sartarelli’s favorite thing is travel combined with his love of reading. He often reads while traveling allowing him the opportunity to learn and explore both on and off the page.

“The world is a beautiful place [travel] is an opportunity for us to see it ” he says. “I think this is one of the great things that modern men and women have that our predecessors didn’t.”

Born and reared on a crop farm in Brazil Sartarelli first came to the United States as an exchange student during high school then moved back to Brazil to complete his undergraduate degree. Upon his return to the United States on a Fulbright Scholarship he attended Michigan State University and earned his MBA and PhD in business. He worked for several major global companies for 30 years before returning to academia. As chancellor of UNCW for the last three and a half years he has fallen in love with Wilmington and all it has to offer.

“I like the water the ocean but I also like mountains ” he says. “If I had a chance I would probably live on top of a mountain so I could see 360 degrees.”

Sartarelli has visited almost every national park in the United States as well as some in Australia and Brazil. He is particularly fond of mountain vistas.

He admires advances in modern technology that enable humans to travel in record time and view landscapes from heights unattainable in the past.

“I was flying from Denver to Durango during my Christmas vacation … and flew over the Rocky Mountains and it was just gorgeous ” he explains. “Traveling for me is very special — it’s educational it’s fun.”

When traveling by air Sartarelli prefers to sit by the window.

His favorite destinations include the American West Europe Australia and Brazil. He has summited Mount Fuji and hopes to hike Mount Kilimanjaro one day. Antarctica Patagonia Lake Victoria and the Liguria region of Italy rank high on his places-to-visit list.

Sartarelli’s advice for younger generations is to seek a balance between travel and work and stay away from what he calls “artificial stimulation” in favor of exploring the natural beauty of the world.

“The world is a lot prettier than all that stuff ” he says. “There’s nothing more beautiful than a sunset when the skies go red and the pastels … it’s just gorgeous like paintings. … I think young people should do more of that. It’s a beautiful world out there and on airplanes no one looks out the window. I mean is there anything more beautiful than flying through a cloud?”

He encourages young people and all people to remain curious about the world and to look beyond their screens and devices.

“Give up on the device at least for a while and see the world the real world ” he says.