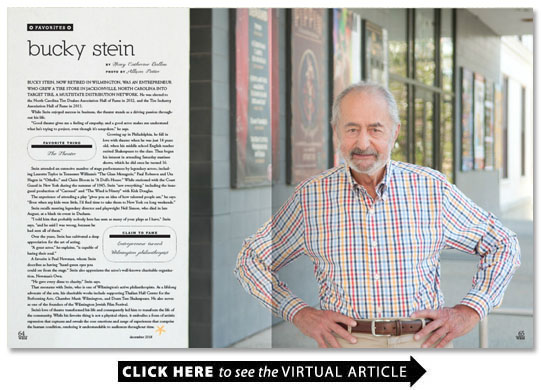 While Stein enjoyed success in business the theater stands as a driving passion throughout his life.

“Good theater gives me a feeling of empathy and a good actor makes me understand what he’s trying to project even though it’s unspoken ” he says.

Growing up in Philadelphia he fell in love with theater when he was just 14 years old when his middle school English teacher recited Shakespeare to the class. Thus began his interest in attending Saturday matinee shows which he did once he turned 16.

Stein attended an extensive number of stage performances by legendary actors including Laurette Taylor in Tennessee Williams’s “The Glass Menagerie ” Paul Robeson and Uta Hagen in “Othello ” and Claire Bloom in “A Doll’s House.” While stationed with the Coast Guard in New York during the summer of 1945 Stein “saw everything ” including the inaugural production of “Carousel” and “The Wind is Ninety” with Kirk Douglas.

The experience of attending a play “gives you an idea of how talented people are ” he says. “Even when my kids were little I’d find time to take them to New York on long weekends.”

“I told him that probably nobody here has seen as many of your plays as I have ” Stein says “and he said I was wrong because he had seen all of them.”

Over the years Stein has cultivated a deep appreciation for the art of acting.

“A great actor ” he explains “is capable of baring their soul.”

A favorite is Paul Newman whom Stein describes as having “hazel-green eyes you could see from the stage.” Stein also appreciates the actor’s well-known charitable organization Newman’s Own.

“He gave every dime to charity ” Stein says.

That resonates with Stein who is one of Wilmington’s active philanthropists. As a lifelong advocate of the arts his charitable works include supporting Thalian Hall Center for the Performing Arts Chamber Music Wilmington and Dram Tree Shakespeare. He also serves as one of the founders of the Wilmington Jewish Film Festival.

Stein’s love of theater transformed his life and consequently led him to transform the life of the community. While his favorite thing is not a physical object it embodies a form of artistic expression that captures and reveals the core emotions and range of experiences that comprise the human condition rendering it understandable to audiences throughout time.