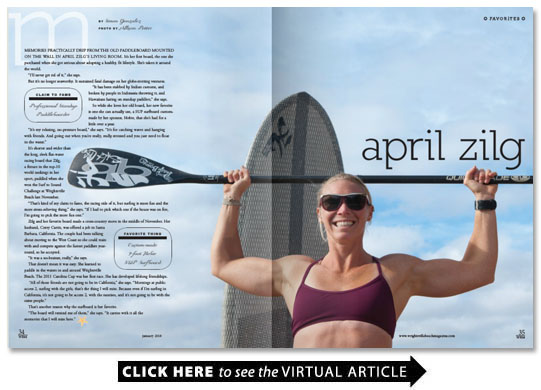 Memories practically drip from the old paddleboard mounted on the wall in April Zilg’s living room. It’s her first board the one she purchased when she got serious about adopting a healthy fit lifestyle. She’s taken it around the world.

But it’s no longer seaworthy. It sustained fatal damage on her globe-trotting ventures.

“It has been stabbed by Indian customs and broken by people in Indonesia throwing it and Hawaiians hating on standup paddlers ” she says.

So while she loves her old board her new favorite is one she can actually use a SUP surfboard custom-made by her sponsor Hobie that she’s had for a little over a year.

“It’s my relaxing no-pressure board ” she says. “It’s for catching waves and hanging with friends. And going out when you’re really really stressed and you just need to float in the water.”

It’s shorter and wider than the long sleek flat-water racing board that Zilg a fixture in the top-10 world rankings in her sport paddled when she won the Surf to Sound Challenge at Wrightsville Beach last November.

“That’s kind of my claim to fame the racing side of it but surfing is more fun and the more stress-relieving thing ” she says. “If I had to pick which one if the house was on fire I’m going to pick the more fun one.”

Zilg and her favorite board made a cross-country move in the middle of November. Her husband Corey Curtis was offered a job in Santa Barbara California. The couple had been talking about moving to the West Coast so she could train with and compete against the fastest paddlers year-round so he accepted.

“It was a no-brainer really ” she says.

That doesn’t mean it was easy. She learned to paddle in the waters in and around Wrightsville Beach. The 2011 Carolina Cup was her first race. She has developed lifelong friendships.

That’s another reason why the surfboard is her favorite.

“The board will remind me of them ” she says. “It carries with it all the memories that I will miss here.”