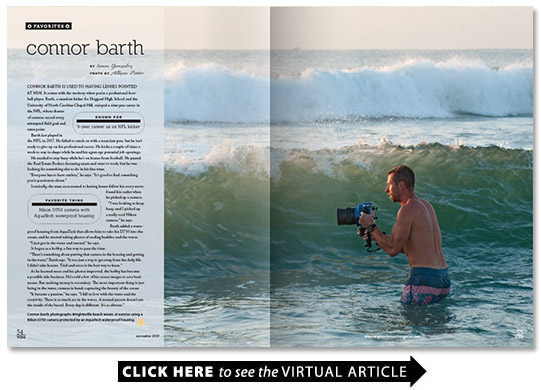 Known for: 9-year career as an NFL kicker

Connor Barth is used to having lenses pointed at him. It comes with the territory when you’re a professional football player. Barth a standout kicker for Hoggard High School and the University of North Carolina-Chapel Hill enjoyed a nine-year career in the NFL where dozens of cameras record every attempted field goal and extra point.

Barth last played in the NFL in 2017. He failed to catch on with a team last year but he isn’t ready to give up on his professional career. He kicks a couple of times a week to stay in shape while he and his agent eye potential job openings.

He needed to stay busy while he’s on hiatus from football. He passed the Real Estate Brokers licensing exam and went to work but he was looking for something else to do in his free time.

“Everyone has to have outlets ” he says. “It’s good to find something you’re passionate about.”

Ironically the man accustomed to having lenses follow his every move found his outlet when he picked up a camera.

“I was looking to keep busy and I picked up a really cool Nikon camera ” he says.

Barth added a waterproof housing from AquaTech that allows him to take his D750 into the ocean and he started taking photos of surfing buddies and the waves.

“I just got in the water and started ” he says.

It began as a hobby a fun way to pass the time.

“There’s something about putting that camera in the housing and getting in the water ” Barth says. “It was just a way to get away from the daily life. I didn’t take lessons. Trial-and-error is the best way to learn.”

As he learned more and his photos improved the hobby has become a possible side business. He’s sold a few of his ocean images to area businesses. But making money is secondary. The most important thing is just being in the water camera in hand capturing the beauty of the ocean.

“It became a passion ” he says. “I fell in love with the water and the creativity. There is so much art in the waves. A normal person doesn’t see the inside of the barrel. Every day is different. It’s so diverse.”